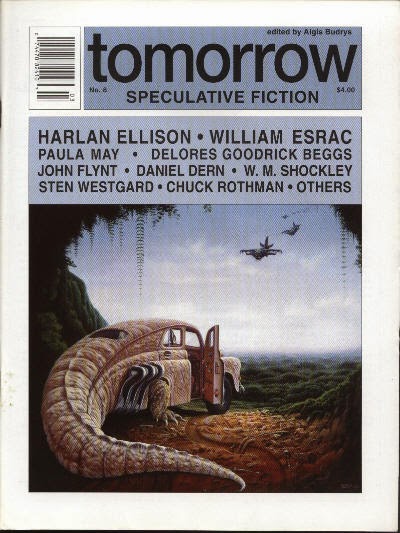 April, 1994 issue. Features my first professionally-published short story, "Bedtime"...the only story in the issue briefer than Ellison's "Attack at Dawn" (from the Mind Fields project, wherein Ellison wrote stories around Jacek Yerka's paintings, including the one on the cover). My story was added to the last page at the last minute, so I'm the only fiction-writer not mentioned on the cover (the usual cover format slightly altered by the shape of Yerka's painting). The artists and I are the Others. Algis Budrys had bought the story in 1983, but misplaced the manuscript. The dangers of tabletop publishing.

Also, this is about the 25th anniversary of my first professional sale of poetry to a magazine, Janet Fox's Scavenger's Newsletter. 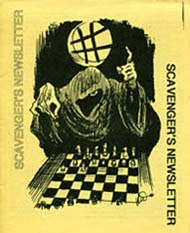 Much later issues of Scav... 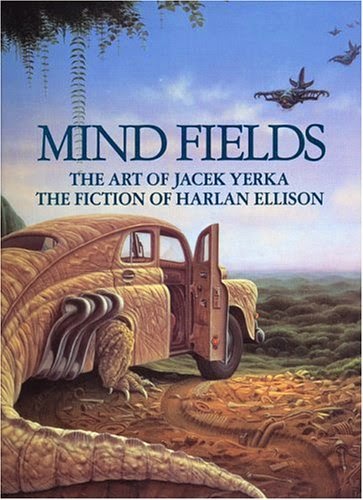 Happy Dual Anniversary, Todd! Anything in the publishing pipeline coming in 2014?

Happy anniversary. I subbed to Tomorrow, but I suppose all my issues would up at Texas A&M. Or else I gave them to someone else. All I know is that I no longer have them.

Nothing much yet, BV. Keeping up with the rest of life is already quite a ride at the moment.

I hope they're in good hands one way or another, Bill...it was a solid magazine, even if only rarely did it publish extraordinarily good fiction.

Happy Anniversary! Being in the same magazine with Harlan Ellison is pretty exclusive company!

So cool! And you're on the cover—it says "others." Somehow I didn't know you wrote fiction. Color me impressed.

Congratulations Todd - and what great company to be in -those lucky people!

George--Well, having Budrys buy the story was more happiness than I thought I'd achieve at the time...and I might've been even more chuffed to have been in the same issue with Avram Davidson, but the Ellison story was better...Budrys would publish a number of his own vignettes and shorts under his established pseuds (William Scarff, etc.)...

Well, Kelly, what did you think that old-man grumping on your blog was about? This story was also shortlisted by Ellen Datlow in her and Terri Windling's annual for its year, and got me a nice letter from Karl Edward Wagner, as well as a very good little check from Budrys. (In the review of the issue in TANGENT magazine, the reviewer demonstrated not understanding it at all...I hadn't realized I was being so cryptic.) Other stories have been nominated for various awards and/or been singled out by various editors and readers, and I've won some campus writing awards back when, but I haven't sought to publish nearly enough.

Happy Anniversary and many congratulations, Todd! Do you still write fiction and poetry?

Thanks! I do, Prashant, albeit sporadically. There are a few examples of fiction littered about the blog, some notionally OK. I've written some light verse, including a haiku published by THE MAGAZINE OF FANTASY AND SCIENCE FICTION the other year, but more often in the public eye more informally.