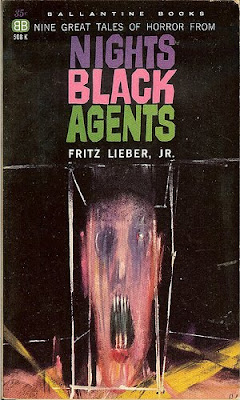 Fritz Leiber's first book (as opposed to his first two novels, first published in magazines in 1943) was this brilliant collection, which has seen three major variant editions over the decades in the U.S.: the original Arkham House edition, with the jacket by Ronald Clyne below; the Ballantine paperback, part of their loose horror line around the turn of the 1960s, featuring (as did the other horror titles) a Richard Powers cover (at right) (and with the novella "Adept's Gambit" dropped so as to result in a rather thin paperback, much cheaper for Ballantine to produce in those years and thus easier to offer at the 35c price-point); and the Berkley edition, with a Wayne Douglas Barlowe cover, at bottom, and two stories added to the original contents, the important early story "The Girl with the Hungry Eyes" and the impressive mid-career "A Bit of the Dark World"...whether these additions were made at Leiber's request or that of Berkley editor David Hartwell is a question I'll have to ask the latter.  This certainly leaves the Berkley as in some ways the best edition to have, in terms of value, and the Gregg Press 1980 clothbound library edition (on acid-free paper) is a facsimile reprint of the Berkley pages (with an introduction by Richard Powers's son, the historian Richard Gid Powers). 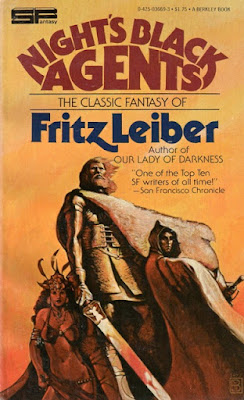 Even without the extra stories, all three variants would be eminently worth the reading even if they contained only the extremely seminal story "Smoke Ghost," one of the several stories where Leiber can be seen to be expanding the palette of fantastic fiction and pointing to new areas for exploration that he and many others would colonize over the next several decades; a very modern sort of haunting (even as "The Girl with the Hungry Eyes" is a notable extrapolation of, and new approach to, vampirism). Others here are almost as influential and as entertaining, not least one of the three stories (including "Adept's Gambit") originally published in the Arkham House edition, "The Man Who Never Grew Young"--a neat inversion of the conceit at the heart of F. Scott Fitzgerald's "The Curious Case of Benjamin Button" and similar fantasies...and the novella itself, one of the key stories in, and the best of the early contributions to, the Fafhrd and Gray Mouser series of sword and sorcery fantasies, often with autobiographical elements, Leiber would write throughout his career.

Indices courtesy of ISFDB (which see for original magazine-issue contents) and Homeville.
For more of today's books, please see Patti Abbott's blog.
Posted by Todd Mason at 8/21/2015 02:31:00 AM

Wonderful colelction (I have the Berkeley edition, which I bought in San Francisco in the late 80s when my then girlfriend was studing at Berkeley - punning aside, really enjoyed this post - always lovely to read and learn more about the great Leiber!

In those years before Berkley and Ace were part of the same company, I'm sure it didn't hurt Berkley's feelings any to be able to dust off this collection, strongly feature the sword and sorcery series (otherwise in print from Ace), and have it out as a companion to Berkley's edition of Leiber's then-new, late horror novel Our Lady of Darkness...set just across the Bay from Berkeley, in San Francisco, long Leiber's home by then.

And there's a quiz question for the trufan: name all the magazines and anthologies and collections that saw first publication of F&GM stories over the decades...

I would have no idea how to deal with the magazine publications Todd, no idea at all - I rely on you for that stuff! Frankly I have trouble keeping it all straight just when I hold the paperbacks!

Needless to say, I didn't know anything about the whole Ace and Berkeley thing - thanks Todd.

I have the Berkley edition. It has teeny-tiny print, as I recall.

I think the Ballantine edition of NIGHT'S BLACK AGENTS was the first Fritz Leiber book I ever read. But it sure wasn't the last! It's hard to think of a writer who has written so well and so diversely.

Sergio, I would have difficulty remembering them all, and I'd just taken a quick look at all the sources...you can be sure that each of the major fantasy magazines that produced special Leiber issues in ten-year increments (Fantastic in 1959, The Magazine of Fantasy and Science Fiction in 1969 and Whispers in 1979) are represented, but so are the likes of Other Worlds Science Stories, the gaming magazine The Dragon, Hartwell's sadly short-lived Cosmos, and the memorial volume for editor and writer Terry Carr,Terry's Universe.

Bill--it's small print, but it's larger than the print on this laptop screen at the most blogspot-friendly setting. As in, grr.

George--Leiber was perhaps the most innovative and one of the most masterful writers to come out of what Algis Budrys called the "newsstand speculative fiction" tradition--taking early cues from Lovecraft and Heinlein and improving on them and deepening them was a good start...and going on to better work from there. It's a pity the degree to which alcoholism and related tragedy dogged him, so that he couldn't always do his best work, but considering what he achieved...no complaints.

And, perhaps the oddest first-publication source for an s&s story, Suspense magazine (the 1950s spinoff from the radio and briefly television series--vs. the earlier attempt to spin off a magazine from the series and the current magazine of that title).