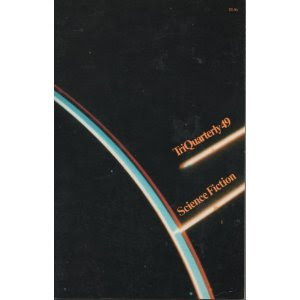 TriQuarterly #49 was meant to be another of the series of adventurous theme issues the Northwestern University-based little magazine had been publishing through the latter '70s; Elliott Anderson and Robert Onopa had put together issues devoted to western fiction and "Love and Hate" and their immediate predecessor (with whom they'd served as assistant editors) had helmed an issue subtitled "Prose for Borges"...so putting together an issue devoted to sf didn't seem too outlandish a project, particularly since Onopa had already published an sf novel, The Pleasure Tube, which had been purchased for publication by Berkley Publishing by their then editor, David Hartwell, in 1978, though Hartwell had left Berkley to begin the Timescape imprint at Pocket Books by the time the novel had been published in 1979, and the new administration took as little care getting it into presentable shape as a publishing package as possible, with the almost comically inane blurb, "Beyond the Star Range: Infinite Sex and Ultimate Horror" plastered prominently across the shoddily-concocted cover of a seriously-intended and rather innovative novel that, among other things, had no part of itself taking place Beyond the Star Range, wherever that might reside. Hartwell, for his part, had been editing and publishing, with others originally as Quest, The Little Magazine for fifteen 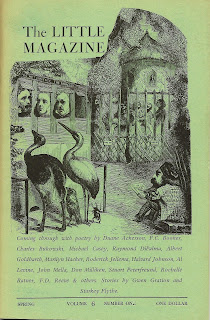 years, beginning a half-decade before he began contributing to the academic literature about sf in the early '70s, simultaneously embarking on his impressive editorial career in sf and fantasy fiction, which was abruptly terminated by his accidental death on 20 January of this year.  This would be Hartwell's only credit with the magazine, and Onopa would be separated from it after this issue, with Anderson and Brent both out the door as well by 1981 so that insurgent editor Reginald Gibbons could instead run the magazine into a Safe mediocrity with solemn promises never to do something so outlandish as a theme issue devoted to sf again.  But seeking this out at the University of Hawai'i library, while I was in high school down the street in Honolulu, was my first conscious interaction with the work of Onopa or Hartwell, though I'd seen some of the other books Hartwell had put together for Berkley, of course, including their edition of Fritz Leiber's Night's Black Agents. (Or nearly so, as I'd seen Hartwell's brief article in First World Fantasy Awards some years before; I was aware of his editorial work with Gregg Press and the quickly-folded magazine Cosmos, as well.)

So, a quick look at the contents of the issue that would so nettle some the subscribers to and defenders of the faith around TQ at Northwestern (courtesy ISFDB):


The long essay by Budrys is brilliant (and, as was his wont, not as kind to the general run of academic writing about sf as he could have been) and the fiction contributions, including the reprints by "Craig Strete" and Thomas Disch, as well as the new fiction by Michael Swanwick (his first story, and widely hailed) and such veterans of literate sf as Wolfe, Le Guin and Delany...and the novel excerpt by MacMillan, a fellow professor of Onopa's at the University of Hawai'i, who had already had a story from TQ in a The Pushcart Prizes volume, and would soon have another in the 1982 volume of The Best American Short Stories but hadn't yet been praised by Kurt Vonnegut as "the Stephen Crane of World War II"--that would happen after he published Proud Monster, his second novel, fixed up from a series of vignettes he wrote at Onopa's suggestion ("In the middle '70s, Bob Onopa and Elliott Anderson ran TriQuarterly, which was the best literary magazine of that decade" as Macmillan noted in a 1990 interview, in which he mentioned studying at the Iowa Writer's Workshop with R. V. Cassill and Vonnegut)...all an utterly creditable package. Onopa, having heard that I had already had a bad run-in with MacMillan, thought it best to shoo me toward the 600-level graduate writing seminar rather than take MacMillan's 400-level course after Onopa's 300-level, which I'd taken in my second semester as a freshman...the grad seminar had been set to be taught by humorist Jack Douglas, who'd tapped out, and Hawai'i-resident writer A. A. Attanasio had been recruited by Onopa to take it on (among much else, Attanasio had published poetry in the 1970s in The Little Magazine). Life can be full of improvisation, and last-minute, fateful decisions...and had been delivering not a few aggressively improvised decisions at the turn of the '80s to Robert Onopa's literary career...and I certainly benefited from some of his rather more benevolent professorial improvisations.

For more of today's books rather than magazines, and more formal reviews than elegies, please see Patti Abbott's blog. 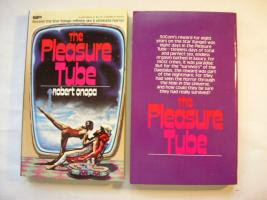 I was sorry to hear about David Hartwell's death. He was one of my favorite SF editors.

I believe my collection of the print TRIQUARTERLY is complete and I just pulled out issue number 49. I'm not sure I've read the 75 page Budrys article but it looks very interesting.

George, has certainly been one of the most influential and accomplished of fantastic-fiction editors. I could take issue with some of his pronouncements (as you'll see in the review of his THE DARK DESCENT on the blog here), but that probably wouldn't surprise anyone.

Walker, I certainly need to pick up issue 43, the history of the little magazine number. Budrys would elaborate on much of what's in "Paradise Charted" in his later F&SF columns, now collected in the BENCHMARKS sequels David Langford and partners have published, but it's still more than useful to read this essay as well. Hartnell collected it in one of his anthologies, and I believe a very obscure collection of Budrys nonfiction might've included it as well.

Todd, the history of the little magazine issue is great and it was reprinted as a hardcover book also.

I might have to find it in that format...even as slight a post as this one keeps leading me down pathways I didn't expect...ISFDB isn't collectively aware that the MacMillan excerpt in this issue is a piece of BLAKELY'S ARK. for example, nor certainly that Onopa had persuaded MacMillan to attempt the work which Made the latter's literary career.