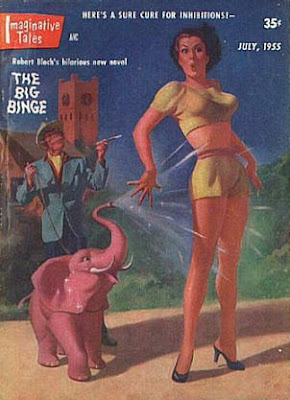 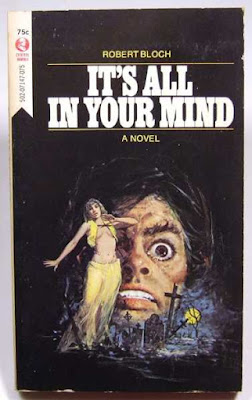 This short novel was the fourth and last fantasy cover story (which you can read at this link) in a row from Robert Bloch for the magazine Imaginative Tales, a sibling publication of Imagination and latterly Rogue, which began its run with two  issues featuring cover-stories from Charles Myers's imitation Thorne Smith fantasy series about the magical sprite Toffee and her human companions...IT's policy throughout its run was to feature at least one novella or short novel per issue, but this was the last issue to not have a definite slant toward science fiction rather than fantasy, and this one is by the wispiest of pretense a science-fantasy story...the magical shapeshifting and related abilities of the protagonist are driven by a machine which manifests his neuroses in a concrete manner  (if Bloch's approach hadn't been so cod-Freudian and he'd taken his concept at all seriously, he probably could've sold the story to John W.  Campbell, Jr. at Astounding Science Fiction...it isn't too far in concept from some of the "psi" stories JWC did publish...albeit it's also mildly bawdy enough to have given Campbell the vapors, as fitted the Thorne Smith tradition this story also follows, and the early policy of IT just before its skin magazine stablemate was launched).

Elmer Klopp (perhaps to help speed the plow while working through this pun-filled short novel, Bloch also indulges in comedy of humors character names...most of the other characters' names themselves relatively weak puns) is lured into an experiment that will, it is hoped, cure his neuroses, by his fellow university student Ada Noid, the charming daughter of famous Professor Perry Noid, the inventor of the psychopathfinder. The gadget, as noted above, physically manifests projections of the greatest fears and suppressed desires of those it's applied to ...beginning immediately, in his case, with the mostly unwanted ability to denude any person Elmer looks at. Inebriating himself to keep that telekinetic power in check leads to the manifestation of a pink elephant that wreaks mayhem on the university's Homecoming parade and ceremonies. (Unlike the pachyderm on Harold McCauley's magazine cover painting, reprinted as cover of the the most recent edition, the pink creature in the story is a full-sized adult elephant.) And so it goes for Klopp and his acquaintances throughout the story, as he continues to work through his id, splits into twelve more or less identical versions of himself, and reintegrates to becomes a gorilla, albeit one who can still speak intelligibly (and not quite McCauley's portrait of a chimpanzee/human hybrid), and as such runs afoul of a mixed bag of Leninist spies, and gangsters and vampires who work with them.

It's all farcical enough to be amusing, while being most interesting as an example of Bloch applying his engagement with abnormal psychology, so famously explored in such crime fiction novels as The Kidnapper, Psycho and American Gothic, to materials which manage, like their model Thorne Smith's somewhat satirical fantasies, to walk a line between the purely humorous and carrying a certain dangerous weight to them, verging in undertone toward the horrific sort of fantasy. Horror and gentler humorous fantasy being two other notable components of Bloch's literary career, as a notable contributor to such other fantasy and horror fiction magazines as Weird Tales (where a young Bloch would contribute his earliest professional fiction, after having read for the first time the fiction of the writer soon to be his mentor, H. P. Lovecraft, and many others, in earlier issues), Fantastic Adventures (an almost direct ancestor of Imaginative Tales, where Bloch had contributed stories to an editorial staff including eventual IT editor and publisher William Hamling), and John Campbell's fantasy magazine Unknown...even as Bloch continued to contribute to such more influential contemporaries of IT as Beyond, Fantastic, and The Magazine of Fantasy and Science Fiction. While minor work, this novel does reward the student of Bloch, as well as anyone who can appreciate an elaborated pun amid any number of rather simpler ones (and a few jokes which take a rather casual view of certain kinds of criminal behavior).

That kinship to his psychological suspense fiction was clearly exploited to the hilt by the Curtis Books package, which manages to portray the story as a more titillating cousin to The Scarf or Night-World, and even manages to capture an image (presumably of Klopp as shaven gorilla) on its uncredited cover painting that looks a bit like a more bug-eyed version of Stephen King, still a young adult  and obscure writer then, not long after King's first sale to Robert Lowndes's  magazine Startling Mystery Stories, his first professional sale after placing high in Scholastic Magazines' annual competition and publication in Literary Cavalcade. Though at least one reference refers to the Curtis edition being a longer form of the story, a spot check of the texts look identical to me in all the editions I have at hand.

The later two editions put the story in context among other more obscure examples of Bloch's work (the Pulpville edition also reprints, in "Ace Double" two-front-cover fashion, the third IT cover story by Bloch, "The Miracle of Robert Weems," a shorter novella, and the short autobiographical sketch by Bloch that was published in the same issue, linked to above, as "The Big Binge"). Aside from some questionably nonfictional fillers and a few minor cartoons, the only other items in the Imaginative Tales issue are Hamling's editorial and the novelette "...So Very Dark" by Daniel Galouye, a story which deals, in somewhat larval form, with Galouye's continuing fascination, throughout his brief literary career (he died relatively young, from complications of WW2 injuries), with motifs of "darkness" as metaphor for the subconscious, and the dangers of manipulation of perception of reality, particularly on the part of governments and other sorts of authority. Almost a child of Asimov's "Nightfall," this story, if rather more elaborated and set against a Cold War framework. 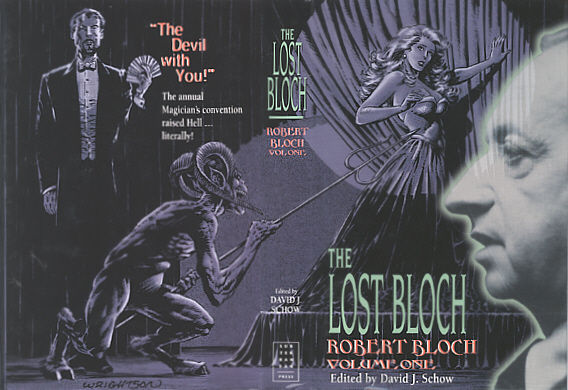 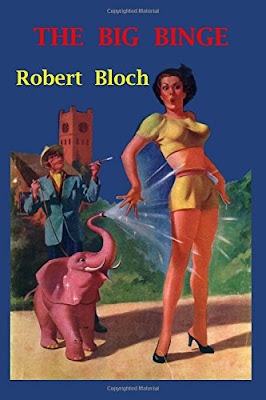 For more of today's books, please see Patti Abbott's blog, and spare a thought for those who are fortunate enough to attend the Bouchercon, the annual world convention for crime fiction writers, editors and other enthusiasts, now in progress in New Orleans, and those who have not been able to attend.

Definitely unknown Bloch to me, thanks Todd. I like the comparison to Thorne Smith, not an obvious writer int he same sentence but the way you have it, makes total sense!

Thank you, Sergio. Thorne Smith was the single greatest model for a lot of what UNKNOWN and the early IMAGINATIVE TALES published, as well as to a lesser but still important extent what F&SF, FANTASTIC, BEYOND and even much of McIlwraith's WEIRD TALES would publish, a mode sometimes dubbed, as by the contributors to John Clute and John Grant's THE ENCYCLOPEDIA OF FANTASY, "slick fantasy"...and certainly an ancestor of what's often referred to as "urban fantasy" today...fiction set in a fairly "realistic" world, with something like H. G. Wells's dictum in place that there be only one miracle (or fantasticated element) per story...

Bloch (and Leiber) were my gateway to fantasy fiction. Bloch probably also influenced my sense (or lack of, according to some) of humor.

They are key to fantasy as it's practiced today, and not solely fantasy...even if Bloch is also vitally important in suspense fiction, Leiber in sf (and considering horror as a part of fantasy fiction, as both were transformational there at least as much as in any other sort of fantasy, even given some of Bloch's gentler work and of course Leiber's pivotal role in S&S). (Consider even such excursions into surrealism on both their parts as Bloch's "The Funnel of God" and Leiber's "Gonna Roll the Bones"...)

Bloch is having at least as much fun being the guy larding the work with puns as the reader will, I suspect, but I have no problems with wordplay either. I do suspect it was at least as much self-service as fan-service in writing this kind of work...which he imbues with more substance than most of his peers in such markets ever would and often more than they could.

After reading this I pulled out my copy of FANTASTIC ADVENTURES and read "The Devil With You". It was also reprinted in IMAGINATIVE TALES and is a crazy and zany comedy about magical events at a magician's convention. I enjoyed it a lot more than I thought I would. I have to rethink my opinion of FANTASTIC ADVENTURES. It may be better that I've given it credit for being...

The story Walker refers to was reprinted in IT as "Black Magic Holiday"...Walker, Mike Ashley might well encourage your reconsideration. I would suggest that, as noted above, Bloch would put more into even the merest yardgoods writing he did for the Ziff-Davis magazines than most...and certainly the earliest issues of FA, before Ray Palmer's cynicism set in, and those from the period ca. 1950-51 when Howard Browne had been seeking out better material for the abortive upgrade of AMAZING (and presumably also FA?) that compares favorably with most magazines even in that period, can reward anyone seeking them out...slight, typical ZD work appeared cheek by jowl with Fritz Leiber's YOU'RE ALL ALONE and "The Ship Sals at Midnight", Bloch's "The Dead Don't Die!" (a very underrated bit of work, perhaps in part due to the pulpy title, but also adapted for a pleasantly mediocre telefilm in the early '70s, which is not a patch on the slightly metafictional original novella), Theodore Sturgeon's THE DREAMING JEWELS, and good work by Clifford Simak, "William Tenn", William McGivern, John D. MacDonald, Mack Reynolds and a number of others (I haven't read the Lester Del Rey nor William Campbell Gault contributions from those years yet).

Funny you should mention "The Dead Don't Die" because I also read it recently in FANTASTIC ADVENTURES. It's not a comedy but one of the more interesting zombie stories, in fact I think it's in the big Zombie collection that came out recently. I have a VHS tape of the TV movie based on the novelet starring George Hamilton and Ray Milland. I'll have to watch it soon.

It certainly has comic as well as metafictional elements, but it is at base fine and serious horror fiction...and a few notable zombie anthologies have reprinted it over the last decade or so. Virgil Finlay's illustrations for it in FA, portraying the protagonist as Robert Bloch himself, add to the fun. George Hamilton is about as underwhelming as one might expect in the role, but he's trying...and the telefilm isn't terrible.

I do have the sense of a marathon session at the typewriter in producing this story. Bloch hugely prolific. And as with all very prolific writers, some of the work is much better than others, but almost everything I've read at least swings for the fences...not always true of the very prolific, but usually true of influential artists such as he.

I very much appreciate your using Shakespeare's name as a verb.