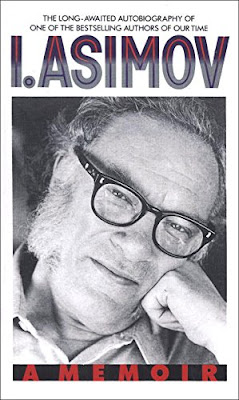 Of all the writers perhaps best known for their science fiction writing, the most thoroughly autobiographied has been Isaac Asimov. There the anecdotes that introduced nearly all his 399 monthly columns, most about science or mathematics, for The Magazine of Fantasy and Science Fiction (F&SF) (and perhaps a few in his similar work for Venture Science Fiction, Astounding Science Fiction/Analog, Science Digest and his editorials for Isaac Asimov's Science Fiction Magazine/Asimov's Science Fiction, among many others), and a slew of interviews throughout his life, he provided running autobiographical commentary in his collection The Early Asimov, the anthology Before the Golden Age, and much of the other relatively casual writing he contributed to such projects as The Hugo Winners volumes he introduced and wrote individual story introductions for. And there are the one essay and three volumes of explicit autobiography he wrote in his latter decades, as well as his collected letters (edited by his brother, Newsday editor Stanley Asimov), three retrospective collections of the range of his published work (one each to commemorate his 10oth, 200th and 300th published book, with the first volume of his autobiography Officially tied for 200th) and a final (so far) volume devoted to excerpts from his autobiographical writing with additional reminiscence by his widow, Janet Jeppson/Asimov. 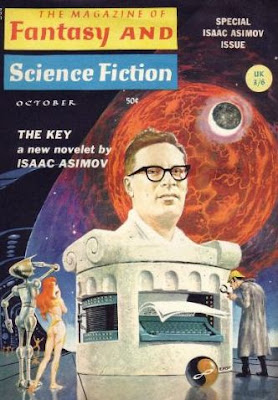 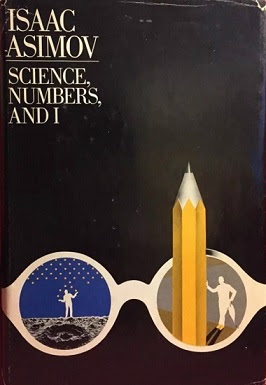 His earliest example of formal autobiography I'll deal with here is the essay he wrote for the Isaac Asimov issue of F&SF, the third in their irregular series devoting a portion of an issue to celebration of one or another major writer in the field who also has contributed notably to the magazine itself (the first two were devoted to Theodore Sturgeon and Ray Bradbury; since the Asimov, writers have ranged from Fritz Leiber through Kate Wilhelm to, most recently, David Gerrold, who might be the least F&SF-heavy of the honorees so far). Asimov's essay for that issue was "Portrait of the Writer as a Boy", and it served as a template for the Early Asimov and Before the Golden Age reminiscences cited above, as well as the seeds of the eventual book-length works. Like most of his F&SF essays, it was collected in a series of volumes for Doubleday,  this one Science, Numbers and
I (1968); my father picked up the 1969 Ace paperback reprint, and it was the first bit of science-fiction writer autobiography I remember reading.

Asimov was soon being nudged, if not too hard, into considering writing a full-length autobiography; he reports that his usual response to such a suggestion is that his life had been exceedingly dull; he wrote. He had other jobs, most of them academic aside from his World War 2 work as a civilian and soldier, but otherwise he wrote. And it's true that relatively little of his life was devoted to much else beside his compulsion to write, and his desire to explain, and to have a reasonably good time when not writing or doing such similar activities as giving lectures or talks to audiences, and socializing in various circumstances, both among lifelong friends and acquaintances in sf/fantasy fandom, fellow writers, his academic and scientific peers, and the eventual wider circle of people who knew him to one degree or another, due to his work with the American Humanist Society or simply through the publicity attendant on his productivity and sustained popularity as a writer. 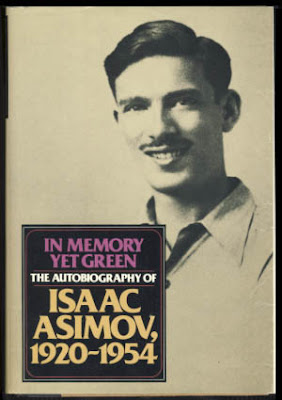 His first near-bestseller, The Intelligent Man's Guide to Science, helped free him from any financial dependence on anything but further writing for the rest of his career, and the branching out he was able to do (into projects such as Asimov's Guide to the Bible and Asimov's Guide to Shakespeare, joke and limerick collections, other sorts of pop-history and eventually even bestselling sf novels). What he was doing throughout this period was also keeping a meticulous daily journal, a task he began as a youth and continued apparently till he could no longer, in his last months of life, as he was dying of AIDS in 1992, he apparently being one of those so unfortunate as to receive a contaminated blood transfusion. One of his last projects was to produce a third volume of autobiography, eventually published as I. Asimov, which was a somewhat more anecdotal, slightly less guarded roll through some of the same territory as his first two fat volumes, In Memory Yet Green and In Joy Still Felt, which also, of course, dealt with his life since the 1979-80 publication of the first two volumes, if not in as great detail as those had...he was writing and revising some of the third volume, and his non-fiction collaboration with Frederik Pohl, Our Angry Earth, from his hospital beds. 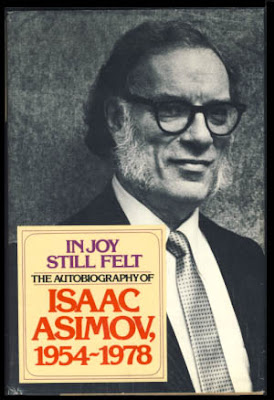 As fellow F&SF columnist Algis Budrys noted in reviewing the books for the magazine, Asimov only occasionally draws great thematic lessons from the wealth of detail he provides, and doesn't dwell too obviously on some of his opinions of those closest to him...he makes no bones, in the first two volumes, about how much more he appreciated his daughter Robyn than his son David throughout their lives together, and how much happier he was with Jeppson than with his first wife, nee Gertrude Blugerman. Much of his early adulthood, and the accounts of if in all the volumes, was consumed by his fights with administrators and other sorts of boss at Columbia University, where he took his degrees, and Boston University, where he was for most of his life officially an associate professor at the medical school...one of the small notes of triumph at the end of the second volume is that his old antagonists at the medical school had all passed from the scene, as he went from strength to strength in the outside world , and he was finally declared, with no greater requirement of time or coursework from him, a full professor of biochemistry. As Budrys also suggests, the accumulation of detail and how he manages to keep the recounting of those details lively through multiple hundreds of pages gives the reader some sense of how Asimov the man and writer worked...even when he's not so explicit as describing his plight ca. 1960, where he rather looked upon himself as a failure: not yet having had his breakaway success with the Guide to Science, still dependent on a low salary at a third-rate medical school, not happy in his marriage nor able to make his wife happy, his relations with his children a mixed bag at best, and decreasingly happy even with his work in sf, or his ability to continue to contribute to it (very much aware of his significance to the field in the '40s and '50s, but even as the decade wore on and his success began to flower in other writing, feeling himself more and more a dinosaur in the field of writing he loved best...something he wouldn't shake till the '70s, though he marked as a turning point a conversation with the ill-fated Evelyn Del Rey in the mid-'60s, when he noted his feelings of obsolescence to her, and she replied, "Isaac, when you write sf, you are the field"). Things got much better before they got worse again. 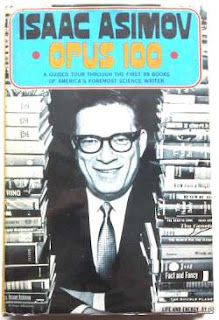 I've yet to read the Jeppson excerpts volume, released on the tenth anniversary of Asimov's death, but I probably will, sooner or later. Having just been dipping back into the first two volumes, and finding them as easy to dig into as I did upon first reading them as a teen, I can say they are more than a useful look into Asimov himself, while of course first and foremost that. 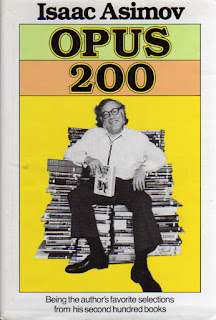 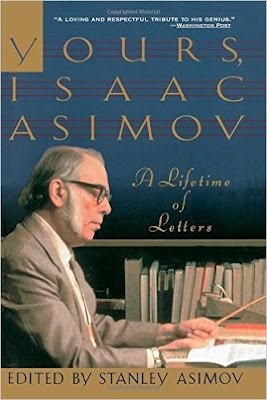 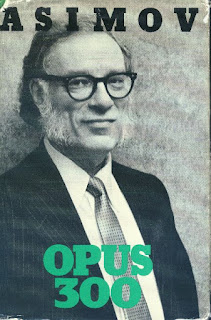 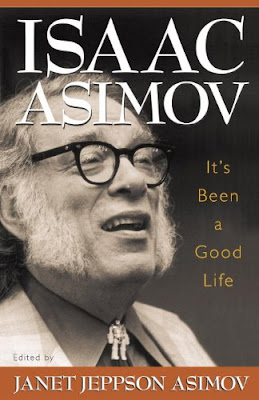 The older I get the more I am drawn to autobios. Never read much Asimov, but maybe I should look at one of these.

I'm of the opinion that he talked about himself to excess.

I. ASIMOV could be your best bet, though it is more a collection of anecdotes than the two-volume set, which is admittedly a very anecdotal but more seamless narrative...

Well, Richard, there was an audience for his memoirs...I certainly was one, and remain one. As for other writers, and wish we had some more from people we'll never hear from now...you read almost angry with him!

I've read the three volumes that Asimov wrote and enjoyed them. I thought he frequently sounded extremely vain in his comments in Asimov's, both in the editorials and in the letter column; less so in the autobiographies.

BTW, I think you mean Evelyn del Rey, not Helen.

Absolutely correct, Steve...thanks. Evelyn Del Rey, she was indeed (and one other time also bucked up Asimov enormously when he was at a low point); she died rather young, and suddenly.

And to some extent, at least, Steve, he was playing a character in his IASFM/Asimov's SF writing...albeit things had been bolstering his confidence considerably by those years, too...

I've read almost all of Asimov's SF. He was a pretty good mystery writer, too. I have his autobiographies but haven't found the time to read them.