Three stories this week that are meant to be parodic pastiches of Mickey Spillane, at least in part. I'd first read all these before I'd actually read Spillane, but the degree of his influence on the literary culture and beyond was already felt sufficiently that I could see where they were coming from. (I might be one of the relative few modern readers who read Spillane's great model, upon whom he improved, Carroll John Daly, before reading Spillane as well. Three writers, all playwrights at various points in their careers, and all prone toward the satirical when the mood struck). (The hotlinks below take you to the texts of the Kerr and Browne stories, and to a reading of the Leiber, the most widely-reprinted of the three.) Jean Kerr's "Don Brown's Body" was the first I'd read, in her Please Don't Eat the Daisies, a collection of essays and fictions, which might (unfairly) mostly bring to mind the Doris Day film (and subsequent tv series) based on the coping-with-children title entry, very much in the Shirley Jackson/Erma Bombeck "safe" mode of such writing, though perhaps a bit less anodyne than they could be. Spillane is one of two primary targets here, the other the pomposity of staged readings, particularly when devoted to such at times heavy going as the epic poetry of Stephen Vincent Benet...a genius, but definitely one better remembered for his shorter works.  (Kerr was a playwright as well as prose writer, and Kerr's husband was a prominent stage drama critic, Walter Kerr, and presumably not a little time not spent with the children was devoted to accompanying her husband to some lesser as well as greater performances, when she wasn't attending or attending to productions on her own). "Don Brown's Body" was my favorite piece in the book, deft and certainly with a Harvey Kurtzmanesque insouciance taking down her mash-up subjects. Sally's beverage of choice, and the reason it was, was perhaps my favorite single joke in the piece. 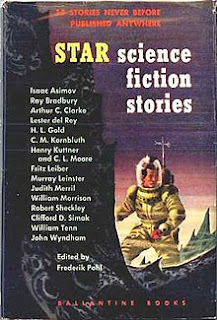 Fritz Leiber's "The Night He Cried" uses Slickey Millane as a character (who both writes about a Hammer character and is himself "the dispenser of sex and justice" in these parts), rather than Mike Hammer himself, albeit Millane is clearly more a stand-in for the Hammer Geist than for Spillane as person or even perhaps as prime mover of the genre. Another Maddish parody, in this one an alien observer is sent down to try to encourage the arrested-development case Millane to realize that he might relate to a woman as something other than punching bag, sex target and bullet repository, when not simply barking at them...Leiber having a rather complex set of reactions to the Spillane school of hardboiled writing. Leiber was a rather pro-feminist man, as such work as Conjure Wife and, perhaps less blatantly, The Big Time makes very clear, but also felt at least somewhat henpecked from early on (see "Gonna Roll the Bones" as well as his autobiographical essay in the late collection The Ghost Light) when raised by highly controlling aunts and such while his parents toured with their Shakespearean company; his relation with his wife was both very close and intermittently interdependent, as explored in such work as "The 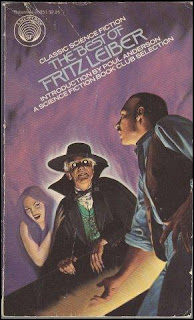 Secret Songs" and a story in part a memorial for her, "Ill Met in Lankhmar".  So, even though he could and did write in a Spillane mode less parodically (see "I'm Looking for 'Jeff'"--a story, published in Howard Browne's Fantastic, which upset James Blish by its apparent faithfulness to a Spillane template), his desire to parody the extremity of Spillane's black and white judgment of his women characters was strong, and elegantly expressed in this novelet, originally in the first volume of Frederik Pohl's anthology series Star Science Fiction. The imagery of the alien creature, slightly inebriated and with all loving intent losing the ability to control its woman-like appearance, has stuck with me, as it understandably upsets the already somewhat unmanned Millane in the story.  I first read it in The Best of Fritz Leiber, where Leiber has a brief comment on it as he does on all the contents. 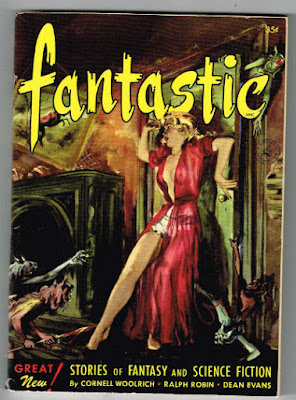 And Howard Browne's "The Veiled Woman" is the least (on its face) parodic, and perhaps even the least fond (though the misogyny Leiber chides and Kerr gleefully mobs in their stories is slightly more played along with, in some ways and less in others, in this novella than in the others). Browne famously ghosted this story, much to Spillane's initial displeasure, after Spillane's "The Girl with the Green Skin", the contracted-for story for the third issue of Browne's new magazine Fantastic, was described in some detail by Spillane in the course of a photo-profile in Life magazine, released at about the same time as the Fantastic issue was going to press. Faced with the "scoop" of the actual Spillane story by one of the largest-circulation magazines in business, and, as Browne would later admit, because he absolutely hated "The Green Girl" as a story, Browne hurriedly wrote a Spillane pastiche that also gathered up a favored trope of Browne's predecessor editor at Ziff-Davis's fiction magazines, Ray Palmer, who always was ready for another Lost Civilization, Hidden from Human Ken, story. "The Veiled Woman" also allowed Browne, a not untalented crime fiction writer in his own right (and capable of competent if uninspired copy in sf, and sometimes more-engaged fantasy), to take a whack at McCarthyism and the Cold War, from the same sort of Benevolent Visitor perspective as Leiber had employed...only, to keep it true to the Mike Hammer-and-company canon, things turn out much less well for everyone involved. (The not-quite nihilist vigilantism of Spillane's stories would certainly be amped up the next year in another magazine that got of to a popular start in part due Spillane's by-line on new fiction within, Manhunt.)  One imagines that Browne was enjoying mocking Spillane's work to some extent, and perhaps more acutely than some feeling envious of Spillane's market for the work he wanted to do...while Browne increasingly sought to find time to write, eventually letting his editorial duties go by the wayside to do so as Ziff-Davis cut the resources they made available to their fiction magazines. However sliced, this third issue of Fantastic is still legendarily the best-selling single issue of any fantasy or sf magazine published so far (I've been looking for an image with the banner-wrap that announced the "Spillane" story...the  usual citation is that the third issue of Fantastic sold about 300,000 copies, between the demand for Spillane fiction and the boost, ironically, the Life profile might have given to reader curiosity...).

Love the Leiber. Meh on the Browne. Gotta read the Kerr.

The Browne is the least of the three, but remains interesting as a curio at very least. See the link for the text of the Kerr.

I remember laughing my head off at the Kerr when I first read it decades ago (and I hadn't even read any Spillane at that point) and I still have the book. Not read the other two though - thanks as ever Todd :)

And the links on the Leiber title will lead one to a reading (not a Kerr-parodied reading) of the Leiber, and on the Browne to a pdf of the story as it appeared in Fantastic, both courtesy SFF Audio.

I've had a copy of Penny Candy and perhaps one or two others by Kerr for years and Ive been meaning to dip into more, and this selection of items was triggered by Christa Faust on Twitter posting cover of one of Browne's "Halo" series of novels, published s by "John Evans"...it could well be we were Just Young Enough to be delighted by the Kerr, but un rereading it, I'm still fond of it.

I'm a fan of Browne's HALO series. Spillane had an enormous influence on private eye fiction. Plenty of Mike Shaynes could be read as parodies of Mike Hammer.

There's another Spillane parody by Charles Beaumont, "The Last Caper" F&SF, 1954 though its closer to a Mad magazine silly rave-up rather than a considered satirical anatomy/venomous critical deconstruction.

The guy was stoned as heaven...

I haven't read the Kerr or the Browne (yet), but will look for them. I first read "The Night He Cried" in an old Lion Library paperback, GALAXY OF GHOULS. I had never read Spillane (still have read very little) but knew the name and recognized that the story was a parody. It was the first Leiber story I had ever seen, and his name stuck in my head ever after, though the next time I remember seeing it was several years later, on the cover of THE SWORDS OF LANKHMAR.

Simon & Schuster (and to some extent Pocket Books) were kind of spotty about keeping in/putting back into print the Walt Kelly POGO books, in the '70s, so I don't think I saw that graphic story, despite gathering what I could find in those years of my youth and no online bookstores. I actually reviewed GALAXY OF GHOULS for FFB a while back. Thanks, Mike.

I think I might like a Hunter parody more than I do most of his more straightforward work. Thanks, Bill.

Mattehw Davis--I doesn't surprise me that Beaumont would be moved to do so! But I've missed it previously. Will Go Look. Thanks!

George--of course, Mike Shanye predated and might even also have contributed to the development of Hammer, so all the ghosted Shannes (or even Dresser's) starting to sound like or intentionally patterned after or parodying Spillane's work seems only likely, at least from time to time...much like the many faces of Nick Carter...