SSW: "The Girl with the Green Skin" by Mickey Spillane (and why it's missing from FANTASTIC, November/December 1952, and replaced by "The Veiled Woman" as ghosted by FANTASTIC editor Howard Browne)

An entry submitted to the FictionMags Index:

page 79 · "Death's Fair-Haired Boy: Sex and Fury Sell 13 Million Gory Books for Mickey Spillane" · Richard W. Johnson · iv · [Mickey Spillane] illustrated with photos by Peter Stackpole [Spillane summarizes his story "The Girl with the Green Skin", which he had sold to Fantastic for its 3rd (Nov/Dec 1952) issue; Howard Browne notes in several memoirs that he needed a story not previewed/spoiled in one of the US's largest-circulation magazines, so he ghosted "The Veiled Woman" for the magazine, attributed to Spillane, apparently without Spillane's approval. In the later memoirs, Browne notes also he thought Spillane's a terrible story, further incentive.] 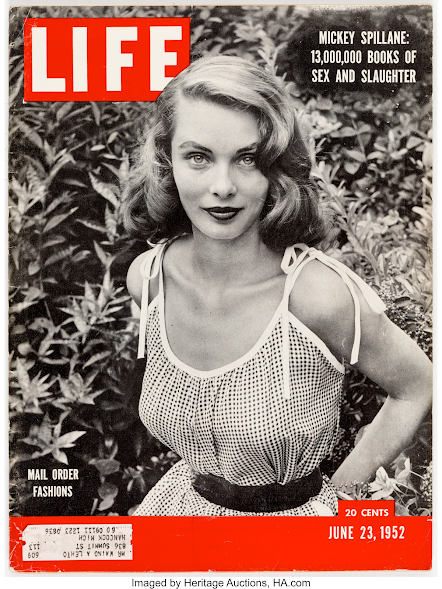 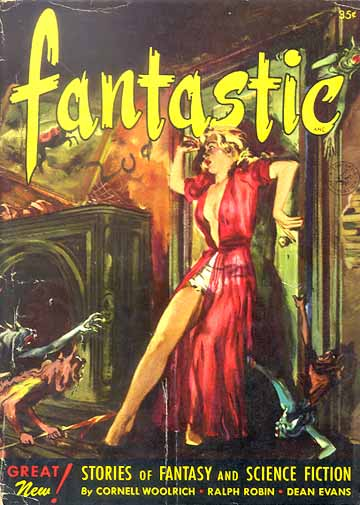 This issue can be read here.
as originally sold: 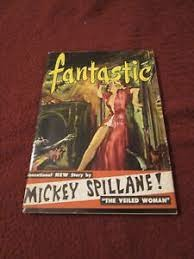 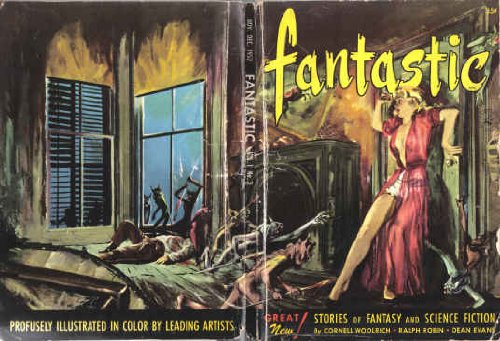 How Spillane summarizes his story "The Girl with the Green Skin" as quoted in Life:
"A reporter visits an artist, and he's fascinated by this portrait of a woman he sees hanging up in the studio. There's this girl, see--she's beautiful, she's stark naked, only she's all green. Even her hair is a dark bottle green. The reporter can't stand it. He asks the artist to tell him about her. The artist says he brought her into the country. She's so beautiful that men who make love to her are never satisfied with another woman. But women hate her. The artist says he had to send her back where she came from. The reporter leaves. The artist is staring out the window. And then he says, 'All right, dear. You can come out now.' And this green hand comes out and touches him on the shoulder. That's all. Nothing more. Keep it mysterious."
see also: Mickey Spillane Parodies and Pastiches
for more Short Story Wednesday reviews, please see Patti Abbott's blog 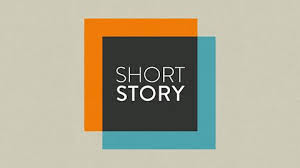 Thanks, Anon. A typo in the header, now fixing. Meanwhile, the LIFE issue was released about the time the FANTASTIC was being "put to bed" (prep finished, and the master being sent to the printers).

Not that "The Veiled Woman" was any great shakes, either.

No...though when I read it, it seemed like a reasonable, slightly parodic pastiche of Spillane, and presumably written rather quickly. I reviewed it while actually awake at the link at bottom of the post...

I have to say, if done well, "The Girl with the Green Skin" as described by Spillane might be a fine story. Of course, it all depends on the execution!

Or, given it's a Spillane story, its lack of execution, in at least two senses. Albeit it does seem to be the kind of goofy concept much in keeping with its time--Of Course All Women Would Hate Her--that Alfred Bester, not too much later, would take as one of his targets in his short story "5.271,009" (still my answer for my favorite Bester story).