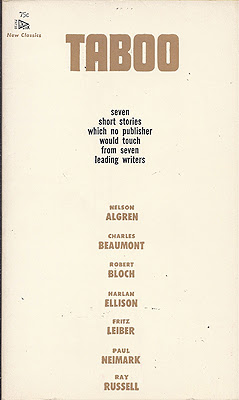 For fairly obvious reasons, there has been an interplay between First Amendment advocacy, bohemian writers, sexually explicit fiction and other publications, and the occasional publication of fairly serious work by houses that are better known for what was intentionally disposable literature, at best. Usually, whether we refer to such magazines as Evergreen Review or Playboy or Rogue or Eros, or to such publishers as Grove Press or Olympia Press, there was often some desire to package and present sophisticated material in every sense, even if the sophistication of some of that material was solely in the adult themes addressed by it. Thus, the Chicago-based New Classics House, which published such work as Kerry Thornley's assassination account Oswald, Albert Ellis's collection of essays Suppressed, and, in two volumes published in 1964 and '65, Paul Neimark's anthologies Taboo and Taboo 2. Not quite Harlan Ellison's anthology Dangerous Visions (1967), nor DV's first form, the abortive Judith Merril anthology for Regency Books that Ellison had commissioned during his brief editorship at that paperback line (which was a corporate cousin to the more erotic Greenleaf Classics and other imprints), the Taboo volumes nonetheless managed to publish some work by notable writers, some of which remains otherwise unavailable...I'm not sure, but it's possible one or more of the stories in Taboo, at least, had been written with the Merril project in mind. (See Matthew Davis's comments, below.) 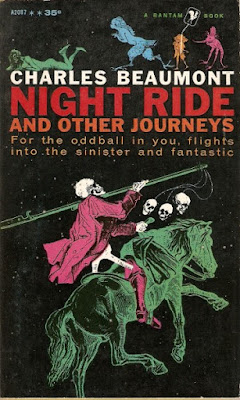 Taboo, for all the hype inherent in the subtitle "seven short stories that no publisher would touch from seven leading writers", reprints two of its stories from books published by mainline publishers, Charles Beaumont's "The Neighbors" (first in his 1960 Bantam Books collection Night Ride and Other Journeys) and Ray Russell's "Take a Deep Breath" (originally in a 1956 issue of George Fox's Chicago-based Playboy imitator Tiger, probably there as a salvage market since Russell was already an editor at Playboy by that time, but perhaps Hefner or A. C. Spectorsky didn't much care for the story; Russell apparently revised it for inclusion in his 1961 Ballantine collection Sardonicus and Other Stories and here). I believe all the other stories were first published in this volume (index courtesy ISFDB) of 127pp.: 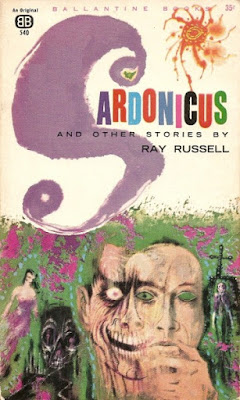 As far as I've found so far, the Bloch and Neimark stories have not been reprinted anywhere, nor the Algren at least under that title (though at least one study suggests that it's a rather different, more sardonic recasting of an incident in Algren's novel A Walk on the Wild Side). As the links above will demonstrate, the other stories original to the volume have since been reprinted in at least one collection of the authors' works. Neimark was a fairly prolific writer, perhaps best-known in his time as the as-told-to collaborator with Jesse Owens on several memoirs and related books by the Olympic athlete, and the author of the novel She Lives! (1972), which was adapted as one of the more popular US telefilms of the early 1970s. It's notable that all the writers involved had some strong ties to Chicago, and most had at least occasionally published in the men's magazines based in the city. Leiber's story includes an incident of incestuous necrophilia, so the tagline was perhaps not so very misleading as to the nature of the stories, if not the facts of their publication history. 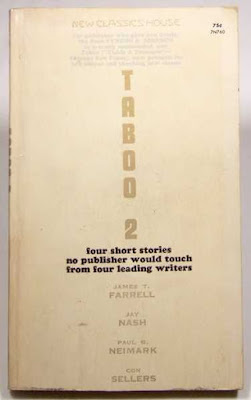 Taboo 2 has a less stellar, if still good, lineup of writers, and, presumably as a result, is far easier to procure on the secondhand book market; the second volume includes four stories, one each by James T. Farrell, true crime writer Jay Nash, fellow prolific novelist Con Sellers (who, like Neimark, would make his biggest commercial splash in later years, with his novels set in and dealing with the run up to World War 2), and Neimark himself again--from the Miscellaneous Anthologies Index:

At least this one is held in local libraries nearby for me (interlibrary loan from mostly Chicagoland holdings for the first volume might be problematic, at best). Niemark published at least one other, nonfiction anthology with New Classics, 1964's Crisis, which includes essays from Farrell and Algren mixed with considerations of the state of the world from L. Sprague de Camp, G. Harry Stine and L. G. Alexander, along with some verse from Carl Sandburg.

Given the importance of the contributors and the relative interest both the content and the writers in question might generate, I'm mildly surprised these two anthologies haven't been scanned and posted in such online resources as Open Library, but at least the physical copies are held by some libraries, and the books, like most published in any quantity, are available, if, again, it's far more likely one can buy a copy of 2 than the original. I would like to know what was so taboo about the Bloch story, and why it's not been included in any of his collections over the decades.

I have NIGHT RIDE and SARDONICUS. But I've never seen TABOO and TABOO 2. I'm not sure I've ever encountered a book published by New Classics House.

I'm not sure how many other NCH books there were beyond the five I cite, and which porn-oriented publisher was issuing them...note they carry the princely (porn-level) price tag of 75c for slender mass-market paperbacks in the mid '60s...when 50c or 60c might've been more common on standard paperbacks on most racks.

I read TABOO back when dinosaurs still roamed the earth and found the stories strikingly good. Did not know about the second volume. Thanks for the review, Todd; it brought back some good memories.

I'm guessing distribution might have been a problem for NCH books. And, as you point out, the relatively high price.

Glad to be of service thus, Jerry!

Indeed, George, I suspect NCH books somewhat might've broken out of the usual channels for Adult Reading distribution--and at least the first was apparently reviewed in PLAYBOY and probably in the other men's magazines which offered book reviews--but, like Olympia Press books and some Greenleaf Classics, probably not by much.

"Lie Still Snow White" was written for Merrill's Regency antho. I forget where, but Leiber said that "The Winter Flies" was also written with Merrill's book in mind.

Thanks, Matthew! Though I would've guessed, among Leiber's three autobiographical not-quite-fantasy near-plays, that "The Secret Songs" would've been the one tailored for a "dangerous/taboo" volume. All three ended up in Avram Davidson or Edward Ferman's F&SF, as it worked out, like the GALAXY group and FANTASTIC and AMAZING the frequent home for such fiction in the '60s, though Lowndes's magazines, GAMMA, SHOCK in its first ownership and even ANALOG on very rare occasion could get their blood up. (I suppose the "shudder" digest version of SHOCK and such fellow-travelers as WEB TERROR could be said to be Dangerous in their retro s&m manner, too...just not interesting or good thus.)

(And, of course, in Britain in NEW WOLRDS and SCIENCE FANTASY/IMPULSE...)

I suspect that Leiber suddenly turned to writing these autobiographical play-stories because he’d spent about a year and a half at the start of the 60s writing plots and dialogue for Buck Rogers newspaper comic strips, so it was a matter of redeploying the scripting skills he’d developed writing the likes of "Greetings to Earth From Elektrum" and "The Imperfect Duplicator” – not that fans would have known since the strips don’t appear to display credit.

Might've been a nudge! He''d clearly been thinking in dramatic terms with THE BIG TIME several years earlier (it's hard to miss that it's structured like a play)...and as a former professional actor, fan of Shakespeare and Webster, I know he'd been off and on considering writing straight up plays, and would publish some purer drama in the '70s...