FFB: THE SPITBOY RULE: Tales of a Xicana in a Female Punk Band by Michelle Cruz Gonzales (PM Press 2016) 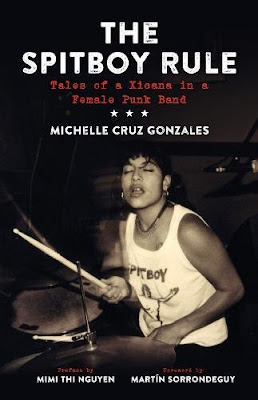 Spitboy was a feminist, all-women hardcore punk rock band in the 1990s notable for being one of those bands, and perhaps the one most widely respected in the hardcore punk community within the punk subculture, who didn't consider themselves a part of Riot Grrl, which was developing in the same years Spitboy and its successor band Instant Girl flourished, largely focused at first around the bands with roots in Olympia, Washington, including Bikini Kill. As Michelle Gonzales notes several times in her memoir here, Spitboy's members felt they were women rather than girls or even grrls, and they didn't feel like recording the more pop-influenced music, or the lyrics exorcizing childhood/early adolescent demons, most of the RG bands favored...a rift that wasn't mended any when one of the more prominent Riot Grrls accused Spitboy of "cultural appropriation" for calling their third released record, an EP ("extended play" multi-song 7" vinyl disc), Mi cuerpo es mio ("My body is mine")...a not atypically white young RG woman, from an economically comfortable background, looking at Spitboy and not fully seeing Gonzales among them, a Mexican American from a small, mostly run-down and impoverished small town in Southern California. Perhaps "thrown" by Gonzales going by her punk-scene nickname "Todd"...


When I heard and saw Gonzales's reading and presentation of her memoir at an anarchist book fair, in the video above, it certainly augmented what I'd known about Todd the drummer, singer (usually backup, or co-lead on the songs she wrote) and general presence in the bands she was in when I was an appreciative fringer in the harDCore scene in Washington in the '80s and '90s, and a dj doing a show called Sweet Freedom, with my then womanfriend Donna Wilson and later solo, first at WGMU-AM, the college station at George Mason University, then at WCXS (later WEBR), the community cable access radio/web radio also in Fairfax County in the DC suburbs (and briefly after my relocation on WPPR-FM in Philadelphia).

As a kid, Gonzales had loved Annie Ross's "Twisted", as performed by Joni Mitchell, and had been inspired to take up guitar, then drums, by the Go-Go's originally, after playing flute in school bands...I could certainly relate to that, though I played the trombone she was glad to have not picked up and lugged around. While I still lived in the DC burbs in Virginia, I met Adrienne Droogas, the lead singer of the band, a couple of times (though on both occasions Droogas seemed depressed and withdrawn, and I didn't seek to intrude...according to Gonzales, this was not the usual case with Adrienne, perhaps the most social of the band's members--and down possibly because she was leaving the band, leading to their name change to Instant Girl), but never met Todd/Michelle, though did see her with the band on a couple of occasions.  In her book, she mentions several times how insecure she usually felt about her looks, particularly in the largely white punk scene and in an otherwise all-white band, and would assume the only reason men she didn't know in the punk scene might be attracted to her was her playing in her bands, Bitch Fight and Kamala and the Karnivores before Spitboy and Instant Girl. She was incorrect, but it felt true at the time, apparently. 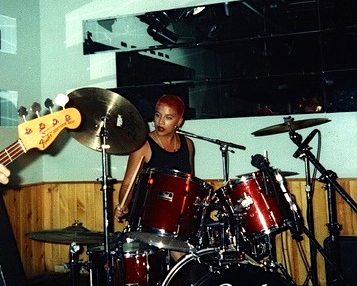 The book is a collection of essays, rather than a continuous narrative, so Instant Girl is barely mentioned at all, as is just a passing note that Spitboy had relocated from the San Francisco Bay Area to DC, perhaps just before Droogas dropped out, and not for long, as far as I know (I should look into this)(amusingly, Bikini Kill also relocated to the DC area for several years...thanks to Dischord Records and other, often related factors, such as Positive Force DC, the dc space and 9:30 Club concert venues, and a thriving scene, DC was for a while comparable to the Bay Area as a punk Mecca). But the recurring themes run to Gonzales coming to grips with various sorts of chauvinism--sexism faced alone and with her bands, racism within and outside the punk community, sometimes subtler than others, ethnicitism even among the Hispanic members of the punk community and even just the occasional awkwardness of being the only Xicana in a band otherwise made up of white women--mixed in with the camaraderie she usually feels with her bandmates and others in punk community, how often they would startle those who knew them for their fierce sound and to some extent look, their willingness to call out bad behavior from the stage and their uncompromising lyrics, that they were friendly women who would prefer to play Travel Scrabble between sets to getting drunk and Fucking Shit Up. Also noted: the pitstop perils of menstrual synch-up while touring by van, adventures in screen-printing t-shirts, not worrying about Punk Points and listening to and singing along with Liz Phair on the cd player in the vans on those tours, and more individualized matters such as how much fellow-feeling she had with Linda Ronstadt, in a way Gonzales could relate to trying to recapture her own family cultural legacy performing songs in Spanish with lyrics Ronstadt could barely understand when younger. Not too much kiss and tell, and what there is is charming. And the last thing she expected from their Japan tour, toward the end of the band's run, was to find herself widely accepted and reasonably comfortable in the country...even when first disembarking at the airport, she was seen by a number of small children as being Disney's Pocahontas in the flesh.

It's a good book, and mostly won't leave the reader adrift even if unfamiliar with the punk scene in the '80s/'90s...I do wonder about a few matters, though. Mostly how the Instant Girl experience went...

Perhaps their most famous single song...


The first song, instigated primarily by Todd/Gonzales, written by Spitboy:

Anarchists aren't necessarily against order, so much as hierarchy. The democratization of everything tends to be the aim of most left-leaning anarchists...direct democracy, with the possibility of opting out.

So, yes, it's a book fair for anarchists and one where people go to talk about anarchist books.

How many book events aren't chaotic?

You might be surprised how many times I've heard this kind of joke about the anarchist gatherings I've been a part of over the decades.

Todd does strike me as an appropriate name for a feminist, hard core, punk rocker.

Or a fringe-punk who hangs around a lot of subcultures and such, and always has. I've been a fringe-fan in the literary fantastic fiction community for quite a few decades now...the community that gave the fanzine/zine concept to punk, as well as the convention/zine traditions to comics fandom, folkies, and crime-fiction fandom...

She was dubbed Todd in a relatively null-feminist way, by a young male punk friend, but I guess the relative absurdity of it appealed to her.

I never much liked then name myself (a PE teacher I suffered in 2nd Grade took great joy in calling me "Clod") till, not long after, I learned that it not only meant fox but Mr. Fox had a long history as a trickster figure in the English traditions (recall Reynard) and when Christianity came in, the identification with the macabre when not proscribed (and the German tod, death personified) was if anything intensified. So, relatively interesting for a name that seemed to mostly belong to the more ineffectual sort of WASP, at least in popular culture in the US.