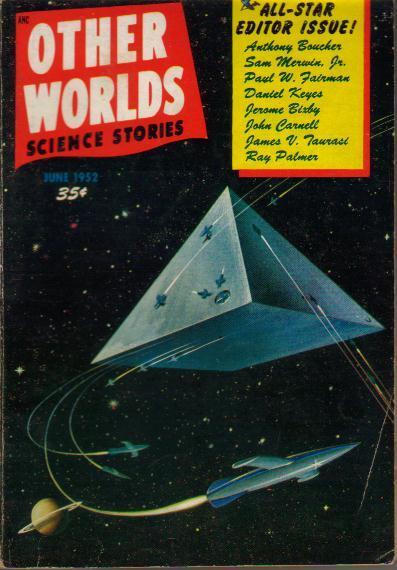 Sometimes a particular issue of a science fiction magazine can be more than just entertainment. Sometimes it can also be an invaluable historical resource. Such is the case with the June, 1952 issue of Other Worlds Science Stories, issue No. 19 of that magazine.

Other Worlds was officially edited by Raymond A. Palmer, with Managing Editor Beatrice Mahaffey doing much of the heavy lifting. No. 19, with a cover by Malcolm Smith of a Borg-like pyramid ship in space, is an “All-Star Editor Issue.” It is so-billed because five of the six stories included were written by present or former SF magazine editors.

In his introductory editorial, Palmer says that, “Our purpose was to show that the science fiction editor of today is not just a copy-boy, hired to paste up galleys by the publisher, who doesn’t...know his science fiction from a hole in the ground.” He explained that an invitation was sent to most, if not all, editors, but for various reasons, many could not respond. “Therefore, this issue of Other Worlds proves editors -- all of them -- can write top science fiction, and those included are representing those not included.” (Not sure how this constituted “proof.”)

These stories, alone, make this issue interesting. All are competent, typical of early Fifties SF, not the best by these author-editors, but representative of their work. However, they are not the reason the issue is of historical usefulness. There are other reasons.

In addition to the stories, there are three articles. British SF editor E. J. Carnell’s “London Becomes Space Conscious” describes the reaction of Londoners to the opening of the SF movies, Rocketship X-M and Destination Moon. In addition, he described the activities of Arthur C. Clarke, “chief astronaut [note early use of this word] of the BIS [British Interplanetary Society].” It seems Clarke was a TV regular. He appeared on a program to show the illustrations from the American publication of the Ley-Bonestell book, Conquest of Space and, shortly afterward, his book Interplanetary Flight was published. “Coming in the future,” Carnell says, “is the British edition of Conquest of Space, and advance publicity is already being tied in with the color movie [Destination Moon], which, by then, will be travelling the outer circuits. And there will be another Clarke TV program on rockets, plus a radio feature on Destination Moon.”

Carnell reports that Rocketship X-M “brought a howl of caustic criticism from the jaded film critics, but, nevertheless, aroused sufficient interest to induce the public to stand in line to see it. Two weeks after X-M had snatched the advance publicity, the trade preview of DM got the critics overhauling their typewriters and ignoring their stale beer....

“Authors Clarke, Temple, Chandler, editor Gillings and myself, BIS technicians, BBC drama producers, and a few of Joe Fann’s relatives, made up a cosmic...group to see the trade show.” The movie was well-received until the end. Then came a 23-word speech accompanying the planting of the American flag on the Moon: “By the grace of God and in the name of the USA, I take possession of this planet for the benefit of mankind.”

“Despite Marshall Aid, Bundles for Britain, Food Parcels, and the Korean War,” writes Carnell, “every film critic in London fastened upon that one piece of bad dramatization, played it up, and played the real worth of the film down.

“‘A Flag Goes Up on the Moon,’ headed The Daily Express, but critic James Leasor admitted liking the space rescue scene. While the Evening Standard critic (a woman), stated ‘It seems the United States is hysterically worried about the Moon as a probable projectile base in the next war. Up go some braves in a super-duper gadgety rocket, and landing on that pock-marked old derelict, proclaim that by the grace of God the Moon is now a part of the United States Empire.’”

Even so, says Carnell, “despite these facetious and sometimes adverse criticisms of what we know to be the finest film of its time, Londoners have been flocking to see it. Even on wet evenings (practically every night), long queues have formed around the Leicester Square Theatre.”

The second article is a long “Open Letter to Paul Fairman” by Palmer. It seems in the May, 1952 issue of If, Fairman published an article devoted to Palmer entitled, “Personalities in Science Fiction.” In it, Fairman attacked Palmer’s flirtation with “The Shaver Mystery.” This “Open Letter” is Palmer’s defense of his infatuation. If anyone is interested in his defense, here it is.

But it’s the third article which makes this issue so historically useful. This article is a long biographical essay on science fiction editors by noted New York fan James V. Taurasi entitled, “The Story of Science’s Editors.” It seems that Taurasi was “responsible for this issue’s leg-work,” perhaps, in addition to writing his essay, also acquiring the eleven photos and two line drawings of editors which appear in the issue.

On the back cover we find a photo of Hugo Gernsback supplied by Sam Moskowitz and another of J. Francis McComas clapping Anthony Boucher on the shoulder as McComas leans over Boucher at work.

Inside the front cover we find photos of Taurasi at his typewriter; Sam Merwin, Jr., smoking a cigarette as he reads copy at his desk; a studio portrait of Daniel Keyes; and a candid shot of a mustachioed Jerome Bixby.

The inside back cover has photos of Damon Knight, sans bushy beard; Sam Mines, leaning back from his desk and staring into the camera; and Robert W. Lowndes, looking like Boston Blackie in Fifties dress hat and thin mustache. There’s also a large photo of Mary Gnaedinger, “Affectionally called ‘Queen of Science Fiction.’” The most interesting photo here is the one of John W. Campbell, Jr. He’s not wearing glasses, nor is his hair crewcut. Thus, he looks astoundingly like John Wayne! Indeed, I had to look closer to ensure it wasn’t a photo of John Wayne. Rounding out the back cover is a line drawing of T. O’Conor Sloane, drawn by Herman Von Tokken, from a photo in a 1926 issue of Amazing. Sloane is bearded and Edwardian in his upturned shirt collar. There is also a line drawing of H. L. Gold accompanying Taurasi’s essay.

Essay copyright 2019 by Eric Leif Davin.
Issue photo above and index below courtesy the FictionMags Index. The ISFDB entry for this issue.
Online issue contents at Archive.org; at the Luminist Archive 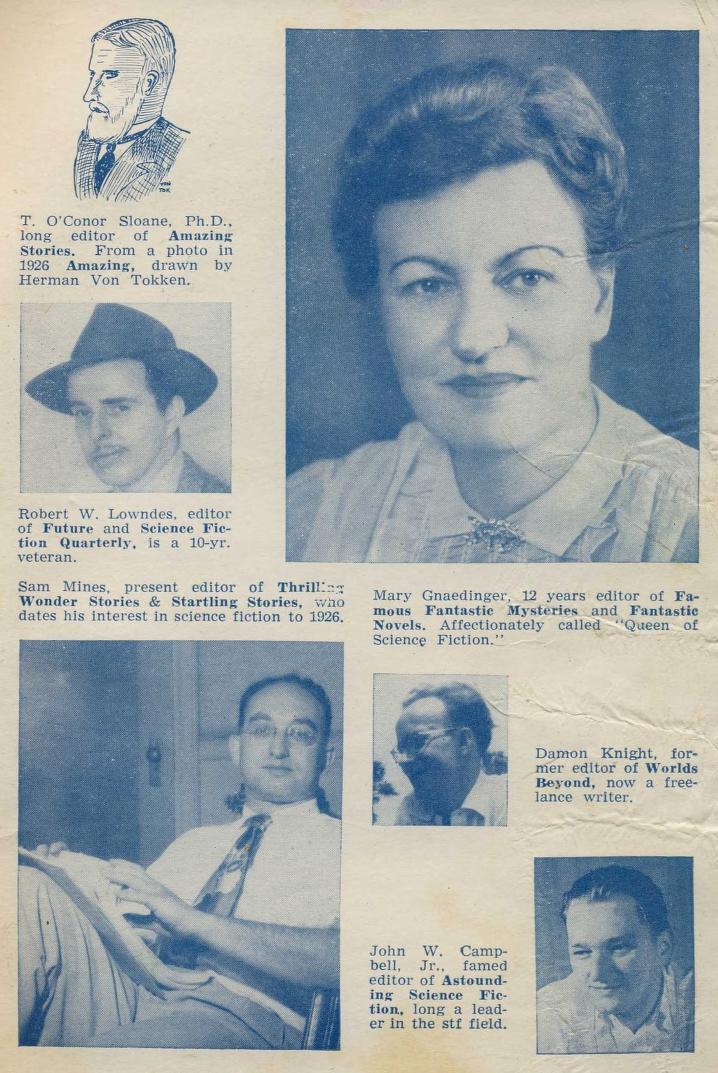 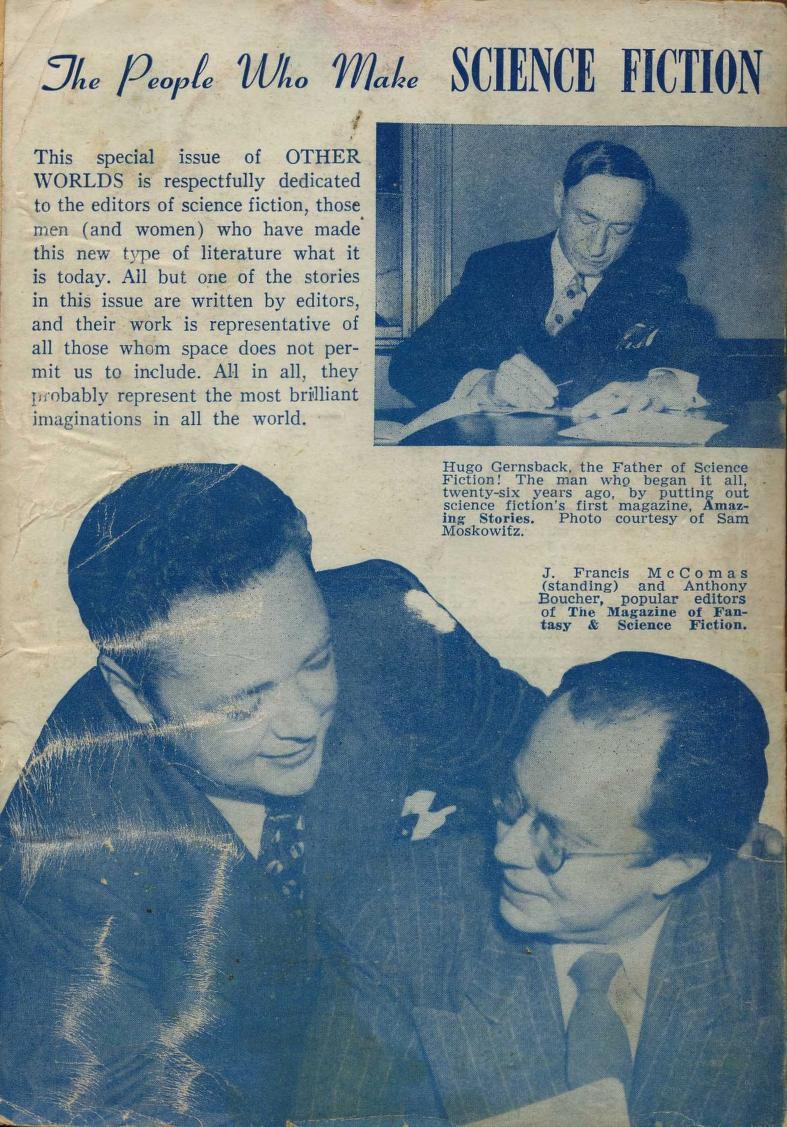 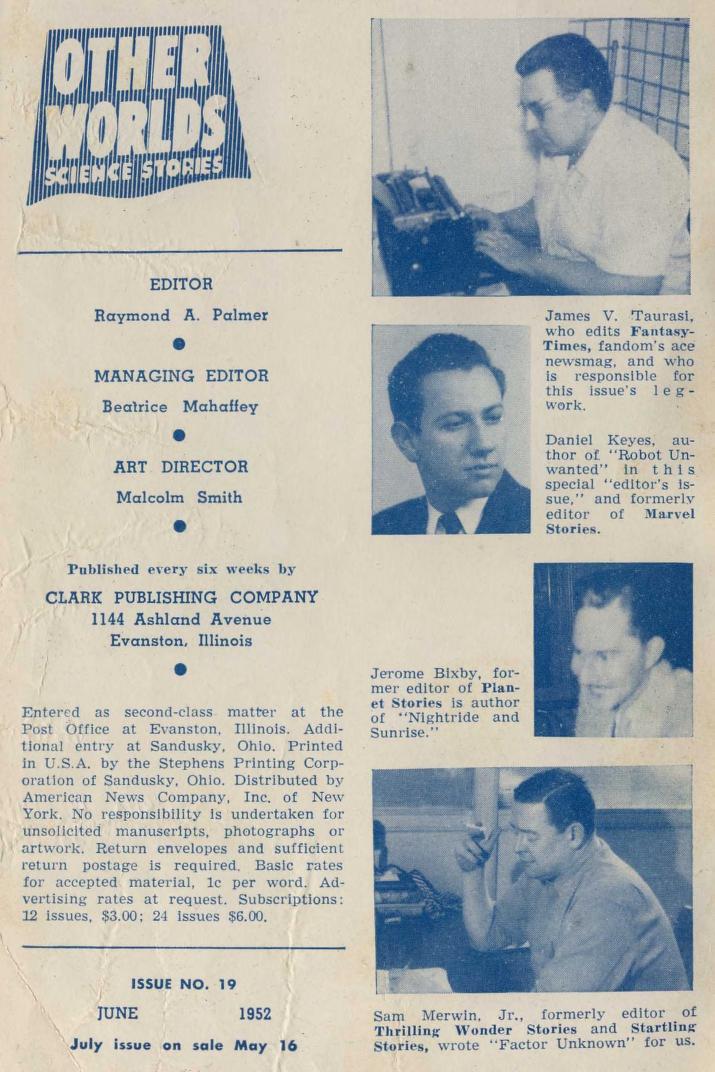 I have this issue and most of Palmer's Other Worlds (OW) issues, as I enjoyed his ballyhoo promoting his mag and writers. S.J. Byrne was a favorite of Palmer. He published a novel by him in Amazing Feb 1948 Prometheus II. It began a series that continued in OW with three long stories "Colossus" May 1950, "Colossus II" July 1950, and "Colossus III" September 1950. "The Golden Guardsmen" was a continuation of that series. Byrne had another long story in an issue of Imagination. He also wrote under the name John Bloodstone and Palmer promoted him as the new Burroughs and announced a novel "Tarzan on Mars" but it never appeared probably due to almost certain legal action from ERB Inc. I seem to recall reading that copies of the manuscript circulated among fans. It may be Ted White can enlighten me on that story. I know Ted liked OW (as did I). Now that I think of it, I wrote a letter after Palmer's death published in Ted's Amazing on Palmer's style as an editor.

I seem to recall the last line of that letter went something very like "Thanks, RAP, for all the gifts."

Goes to show what happens when one reads something when they were 13yo and how it can stick with one...

Palmer and Campbell were more alike than they are usually assessed, in several ways.