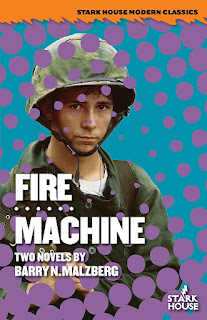 Fire, Barry N. Malzberg (Stark House)
Coleman is on the front lines in Vietnam, on a 3-day leave, dreaming of his fiancé, can only remember the feel of flesh from the slap of a foot and an arm of comrades blown up by bombs.  Needing discharge of one kind, he gets the other, caught screwing a prostitute snuck into camp, he’s sentenced to 60 days in the stateside stockade and given his discharge.
He comes home, feeling otherworldly.  Tunnel-visioned, drunk, incapable of discharge.  He fiancée dumps him, impugning his virility.
“[H]e was not a person anymore, but merely an abstraction, a figure, perhaps, in a collection of grotesque cartoons he was thumbing through.  Or worse than that, he was a memory”.
He heads for NYC, and works at a dildo factory.  He cannot feel real, and he can’t consummate anything.  Hooking up with a coworker's horrible, ugly friend at a porno theater, even she slaps him and calls him a piece of shit.
So he quits his job, goes on a drunk, and falls in love with a Harlem prostitute.  All he has to do is beat Iceberg Slim in a knife fight and she’s his for the taking.
Very entertaining book—and as Barry mentions in the afterword, perhaps the first book to present a protagonist with PTSD. 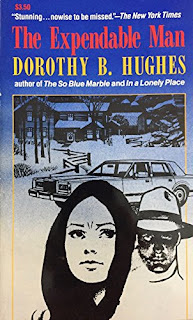 Three by Dorothy B. Hughes:
The Expendable Man:  A young black LA doctor drives to Phoenix for his sister’s wedding.  On the way he sees a white trash teen runaway hitchhiking on the desert highway between LA and Phoenix.  He has a mixture of pity, paternal concern for her safety, and racial paranoia for the judgment he expects to come from racist onlookers envying a black man driving a white teen girl around in a white caddy convertible in 50’s Arizona.
Suffice it to say you’re not paranoid if they really are out to get you.  And they are.  In full fucking force.
Ride the Pink Horse: A senator’s fixer (Sailor) gets shafted after helping kill the senator’s wife for the insurance money.  He’s still owed a grand for the kill—enough to stake him in Mexico. But the sen’s not returning his calls.  Sailor catches up with the sen at fiesta in small town New Mexico.  Fireworks ensue. 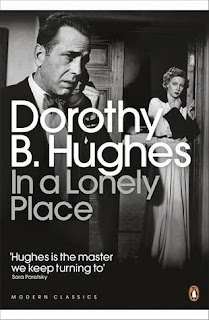 In a Lonely Place:  The book and film are both great. But aside from title, character names and setting they are pretty much completely unrelated. Dix (Dickson Steele) is equal parts Tom Ripley, Ted Bundy and Lou Ford. He’s a serial killer from the title page on. He’s a nobody. He’s a fake. He’s a homicidal maniac whose quivering fingers can only be quelled in the supple squelch of strangulation. 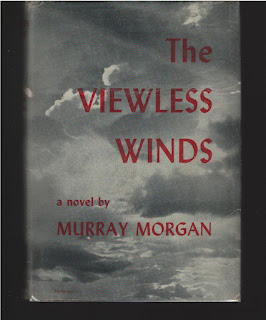 The Viewless Winds, Murray Morgan (1949)A horny old drifter accidentally kills a lumber-union leader’s wife in an attempted rape in the Pacific Northwest. The rest of the book shows the perverted machinations of a lumber baron leveraging a corrupt sheriff into pinning the murder on the bereaved labor leader—whilst union officials try to pin the murder on the lumber baron’s cronies. Fascinating even-handed assessment of the interplay of small town politics, slanted journalism, corporate towns, unions and law enforcement.  A fictionalized account of the murder of Laura Law in Aberdeen, Washington in 1940.  I enjoyed it quite a bit.  Another one from James Sandoe’s hardboiled checklist.
https://archive.org/details/in.ernet.dli.2015.166903 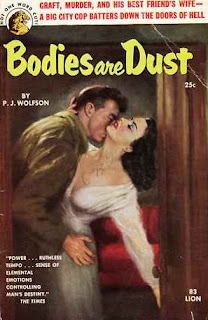 Bodies Are Dust (aka Hell Cop),

P.J. Wolfson, as reviewed by the Paperback Warrior blog

You know, I appreciate the fact that the "Paperback Warrior" blog exists.  It's by far the most active hardboiled crime blog going these days that I'm aware of.  So for that, I'm glad.  And I'm glad that someone is bringing attention to these frequently neglected writers.
Unfortunately I find their reviews to be quite sloppy, with little historical context, unverified and frequently mistaken publishing history, and never any quotations from the books reviewed.  The book reviews are pretty much of 3 types:  Amazing, Pretty Good, and Terrible.  All books can apparently be categorized into these 3 types of books.  And one 'amazing'/'pretty good'/'terrible' review is fairly interchangeable with any other, as there are very few distinguishing details set forth.
Their review of Bodies are Dust is symptomatic of the malaise.  It has been years since I read the book on the fervent recommendation of Al Guthrie both in this listserv's archives, on his 200 noirs list, and in interviews.  I ordered the book on eBay for somewhere around $15, which to me is a lot of money to spend on an old ratty reading-copy of a paperback that dissipates, all but turns to dust as you flip each page.  Especially since I could only afford the Hell Cop-retitled reprint.
In any case, the book has stuck with me.  One of the amazing things about early hardboiled/noir/ crime fiction books is their absolute uniqueness and unpredictability.  These protagonists of ambiguous morality were fairly unprecedented.  And the main character's pathological desire for everything within his orbit makes King David's seduction of Bathsheba look tame.  And the justice here is meted out by karma alone.  Not some avenging angel but by justice itself.  And it's heartbreaking.  The man is destroyed.  But not by his own actions.  He's destroyed because he deserves it.
http://www.paperbackwarrior.com/2021/06/bodies-are-dust-aka-hell-cop.html 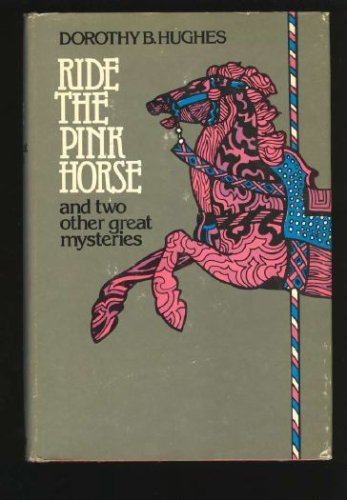 James Sandoe's The Hardboiled Dick, a Personal Checklist was first published as a pamphlet (iinm) in 1952 and has been variously reprinted since. You can pay a c-note for a first edition of sorts, but, well...

Wouldn't you think that the numerous books portraying soldiers with "shell shock", many written after WWI (A FAREWELL TO ARMS, perhaps?) would represent earlier examples of books portraying PTSD? Even perhaps THE RED BADGE OF COURAGE?

Have to Go Look, but wonder if Barry meant PTSD so labeled.