I rarely read random issues of old magazines (these days I have little time to read much of anything, sigh) but I did recently go through this one on a whim.  (This is one of their late all-reprint digest-size issues, and a beat-up copy was cheap at DreamHaven [a Minneapolis bookstore devoted mostly to fantastica-TM].  I'd read two or three of the digest issues as a kid in the later 1950s, so there was a bit of nostalgia operating.)

Publishers reprinting old pulp stories these days frequently have recourse to reminding us that "attitudes were of the time and are reproduced as such but of course we're all much wiser today."  Well, maybe so. Anyway I did find a number of slightly queasy racial glitches in some of these, though they seriously affected my enjoyment of only one of the stories.
http://www.philsp.com/homeville/fmi/k09/k09048.htm#A1 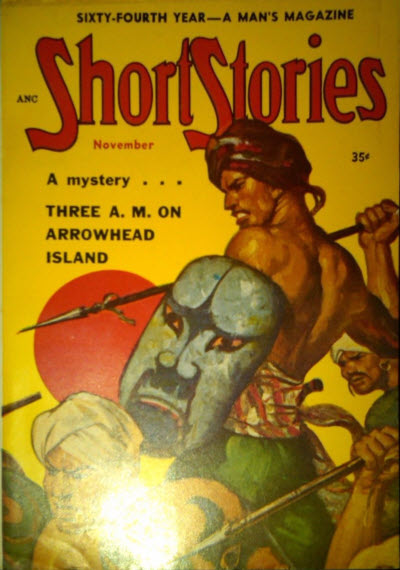 ifc. · The Story Tellers’ Circle · [uncredited] · cl    2 · Never a Law · Bertrand W. Sinclair · nv Short Stories March 10 1931    31 · A Sagebrush Samaritan · B. M. Bower & S. Boswell · ss Short Stories February 10 1925    51 · Three A.M. on Arrowhead Island · Karl W. Detzer · ss Short Stories December 10 1927    72 · Kinross the Killer · Dex Volney · ss Short Stories July 10 1928    85 · The Blunderin’ Fool · Wilbur Hall · ss Short Stories July 10 1928    104 · The Barque in the Bottle · Wm. Doerflinger · pm Short Stories May 25 1933    106 · Sing, You Sailors! · Bill Adams · ss Short Stories June 10 1936    113 · The Golden Gizzard · Clifford Knight · ss Short Stories July 10 1928    131 · Adventurers All · [uncredited] · ts    134 · Red Desert · Norrell Gregory · ss Short Stories June 10 1936    150 · The Judgement of Mystery Swamp · Lemuel L. de Bra · ss Short Stories December 10 1923The cover is presumably a reprint, though not cited as such in the FictionMags Index. South Asian (?) tribesmen brandish spears at something/someone unseen stage right."Never a Law" is a Northern-- when his partner cracks up and suicides on their ship in the far-north Bay of Seals, Christie is framed for murder by the three crewmen who plan to make off with ship and cargo.  He escapes and sets off on foot on a seemingly hopeless nine-hundred mile journey, followed by a Mountie who is fairly sure Christie is innocent, but must try to overtake and bring him in anyway. Well-done, but not a story one wants to read at the start of a Minnesota winter.Some natives (Eskimo, or more correctly Inuit) appear as minor characters; none get individual names, and they are described as drunks who will trade their wives for liquor."A Sagebrush Samaritan"--Pinto Jack has just stolen the monthly payroll from the Santa Fe railway, but it would only have gone to the "greasers" the company employed anyway, so he feels no guilt. On the run, he is befriended by a stranger and they bond over their shared hatred for Mexicans.  (A third allegedly sympathetic character introduced later also shares this trait.) When the stranger is injured, Pinto Jack risks his own capture to save his life and kidnaps a doctor to treat him, then escapes.Perfectly good "basic decency of rogue displayed when he repays a favor at risk of his life" plot, but spoiled for me by the strange unanimity of anti-Mexican attitudes, which seem dragged in to the story rather than having an organic reason to be there."Three A.M. on Arrowhead Island"--Rather dull murder mystery; the evocative title is the best thing about it. I had trouble keeping straight the dull, interchangeable characters, aside from the servant, Benediction, who stands out only because he speaks in a French-Canadian dialect. (And, spoiler alert, turns out to be the murderer, though he thought he was killing someone else, who had cheated him at cards--so a pretty boring motive as well.)"Kinross the Killer"--Seattle revenue officer Jim Kinross, his boat wrecked, struggles in stormy water for several pages before making it to shore, just where the entry point for the drug smugglers he's been seeking happens to be located. He's grudgingly rescued by an ancient thug, but soon the smugglers (all "Japs" except for one "half-breed") appear and he finds he has to kill his rescuer, then hide behind his body in the bunk bed until he has a chance to also kill the invaders and break up the "damnable" business."The Blunderin' Fool"--Western about mining disputes: cast including protagonist, his Negro blacksmith  sidekick "Skin-and-Bones" ("Ain't nobody out hya to botherate him"), a spunky young woman being cheated by her mine officials, and a few local lawmen. Routine."The Barque in the Bottle"--Rather good narrative poem in which sight of a ship in a bottle recalls past adventure to an old tar."Sing, You Sailors!"--Two mariners who keep failing their second-mate exams for steamers wind up in charge of a semi-derelict windjammer off South America, and manage to sail it back to England, even towing in a crippled steamer on the last leg. And next time around pass the exams."The Golden Gizzard"--Allegedly (and mildly) humorous western about "salted" gold mine claims. An escaped turkey, recaptured after roaming the area, is found by the cook to have gold nuggets in its craw. From whence, and (if not naturally gobbled in the wild) inserted by whom? All rather confusing, really. The "Adventurers All" article is a memoir of a reporter in China who is almost killed because of a hat he is given by an unpopular official which, in the dark, makes him mistaken for the official by his enemies. All a good joke, supposedly. The FMI lists this as "uncredited;" it's by Alfred Batson and is copyright 1938."Red Desert"--Another spunky young woman (with a weakling but honest brother) who owns a mine, but is being cheated by employees. Undercover agent solves things and romance blooms."The Judgement of Mystery Swamp"--One of the two rogues on the train actually killed Benet's brother; the other was only an associate. Benet will toss them both off in the middle of Mystery Swamp and the Swamp, as usual, will ensure that a murderer will not make it out alive."The Story-Teller's Circle" contains the only new material in the issue--a longish letter from SS author Caddo Cameron and a preview of the next issue, hyping a (new) serial by Frank Gruber. Cameron praises Short Stories for never printing anything unfit for a young "kid" to read.  (Well, that was *his* opinion.)All in all, no classics.  I'd rate "Never a Law," "The Judgment of Mystery Swamp," and "Sing, You Sailors!" as the best stories, probably in that order, and "A Sagebrush Samaritan" the clunker (and I wouldn't have encouraged a young "kid" to read it) for the strange "white guys on both sides of the law bond over shared contempt for Mexicans" subtext.Dennis Lien
Reprinted from the FictionMags discussion list with permission.
Copyright © 2022 by Dennis Lien
for more of today's Short Story Wednesday entries, please see
Patti Abbott's blog The irony "A Man's Magazine" was edited by Ms. McIlwraith was lost on no one, hence her tenure at SHORT STORIES was always bylined "D. McIlwraith", while it was given as Dorothy McIlwraith at its companion magazine WEIRD TALES, clearly not so hairy-chested. There was no such worry, of course, even as late as the '50s, though by then it was at least becoming uncommon, for "Women's Magazines" to be edited by men.

Also those noting that all the recent guest posts are of fiction magazines with initials SS might be disappointed that a guest post devoted to, say, SNAPPY STORIES is not forthcoming, but, then, perhaps we'll see...

I don't think I've ever noticed this magazine before!

It doesn't seem to be listed at the ISFDB, or am I just missing it due to confusion over the name?

Gary: SHORT STORIES is not in the ISFDB because it was a general short story magazine, not a sf/f magazine. My impression is that in its glory days in the 1920s and 1930s and 1940s that it rarely published sf or fantasy, at least nothing beyond the likes or Rohmer or Mundy.

When I discovered the shrunken, almost-all reprint version it had become in the 1950s it sometimes reprinted one or two fantastika stories in an issue, but most of the contents were still general adventure fiction of various sorts.

Let me wish you, Alice, and all who follow this blog a wonderful Thanksgiving.

Thanks, Denny. Good to know.

I'm living in Minneapolis nowadays, by the way, so who knows, we might run into each other somewhere, though my health sucks these days, with heart failure and bad legs, so my mobility is very limited and I go out only rarely.

Hope you're well, and best wishes.

Jerry-thanks, and to you and yours. Alice waves back virtually!

Gary and Denny-And Short Stories, Inc, which had published both SS and WEIRD TALES for some years, was sold to Leo Margulies at Renown in the latter '50s, so the last issues of SS were published as companions to MIKE SHAYNE MM and Renown's other magazines...I suspect these were the issues young Denny first picked up...it took Margulies till 1973 to actually publish a new issue of WT.