FFB: some Encyclopediae of Science Fiction: a quick survey 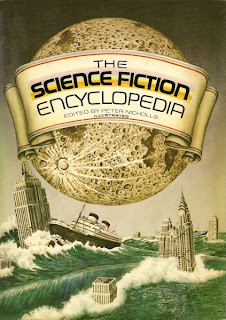 Science fiction, and the related literature, has had perhaps more than its share of attempts at comprehensive reference volumes, which (at least the ones I'll consider in this brief survey) focus primarily (and properly) on literary sf, but also attempt to include at least good and useful coverage of sf in related media, ranging from comics to films and/or television, radio to various sorts of games, and beyond.

Most of them, so far, have not been able to keep the promise that they initially offered, to do at least a reasonably thorough job in serving as a guide to the entirety of what's sfnal in the world, but some have come closer than others, and the 1979 Peter Nicholls-edited volume here is the direct ancestor of the best attempt so far, The Encyclopedia of Science Fiction (Third Edition) now edited by (among others) John Clute and David Langford, and being published online...finally, enough space for potential pages to cover everything anyone could want. 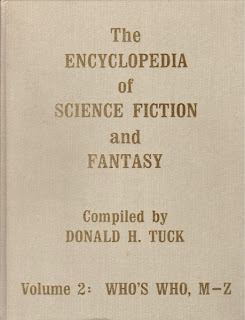 The Donald H. Tuck Encyclopedia was the first comprehensive attempt to guide the reader through the entirety of the field...an impressive and reasonably accurate production, whose major flaw (aside from Tuck's relative terseness with critical opinion in the book, for those who found it a bit dry as a result) is that for a three volume set first published in 1974, 1978, and 1983 (for the individual volumes), it basically covers the field only up to 1968. Tuck did a masterful job of representing the histories of the magazines he chose to cover, the form of which such resources as Phil Stephensen-Payne's Galactic Central have, at least somewhat, emulated in the years since.

The Tuck volumes were issued with no traditional dust jackets. 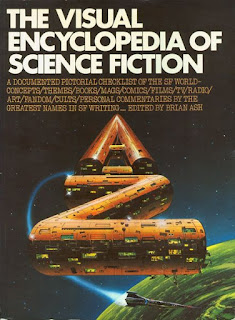 The Brian Ash volume from 1977 is a genuine curate's egg...the opening section, a timeline that covers several aspects of sf chronologically from the pre-Gernsback years up through much of 1976, is actually a good idea and reasonably well-executed. The rest of the book, while sometimes pretty (though the images accompanying the thematic essays that make up the bulk of the book are only occasionally the best illustrations for the points Ash, who appears to have written most of it himself, hopes to make), is at best a disappointing and not well-enough researched set of attempts to take the pulse of the field, as well as chart its history...moreso than those that follow. The page layout of the book, meant to emulate slick magazines with many sidebars, etc., is also excessively busy.  The short essay at the back of the book, meant to cover the many media sf can be found in, was hurriedly cobbled together by Ash, as I recall, when a supposed collaborator withdrew at the last minute. 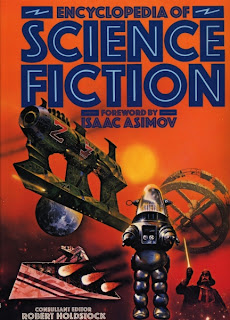 Robert Holdstock's coffee-table book, even more than the other volumes under discussion, is less an encyclopedia than a collection of essays about the sf field, one that tries to cover a good range of what the field is all about, but is not quite...encyclopedic. And publisher Octopus Books did us all, particularly the contributors, a real favor in packaging the book: thank goodness Robbie the Robot is on the cover along with Darth Vader, so you can understand that this a sky-fie book, if the sadly Third Reich-reminiscent thunderbolts don't tip you off. 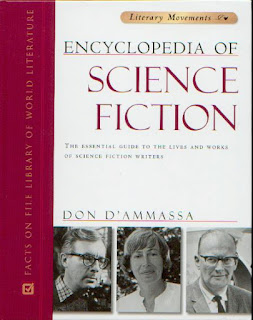 Don D'ammassa's 2005 volume for Facts on File, which he followed up with a 2006 companion on horror and fantasy fiction, and a 2009 entry on adventure fiction, is the only one of these I deal with here that I've not yet read at all. Facts on File books are not inexpensive, and are aimed at library and other institutional purchasers, and some are very much better than others...but I'll suspect that D'ammassa, who might be the most prolific reviewer in sf (if anything, he appears to read too quickly, but still manages to write intelligent and pithy reviews) has done at least an interesting and valuable job with these volumes. 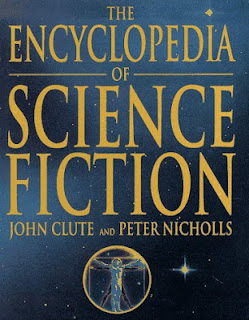 Meanwhile, the 1979 Nicholls encyclopedia (with John Clute as an assistant editor) was followed by this volume in 1993, and both have been monuments within the field...the most useful and apparently the most accurate and truly encyclopedic volumes since the Tuck, and rather closer to up to date by the time of their publication; also not inexpensive, particularly the 2003 edition, but this second edition is essentially twice as long as the later D'ammassa. Even with that, as with the first edition, certain editorial decisions had to be made, not all of which I agree with...most annoyingly to me, in this edition as well as the previous, a writer of short fiction who didn't publish a book, no matter how prolific and perhaps once important in the field or at least to the magazines where the work was offered, is likely to be ignored, while anyone who published a novel or collection, no matter how trivial, is much more likely to get a listing. As noted above, in the third/electronic edition, with less physical limitation, is much more likely to offer citations to those who didn't receive collection between boards or in paperback. In generally praising the first edition (if I recall correctly), Algis Budrys also noted a certain tendency, which he described as particularly common among British writers and critics, to treat the subject matter at hand (sf, of course) as if it wasn't entirely serious, which tend to encourage the question of why are the authors/editors of a volume such as this thus spending their time...but, nonetheless, the information gathered in the two volumes (and website) devoted to sf primarily is impressively wide-ranging, and led to similarly impressive subsequent and related projects as Science Fiction: The Illustrated Encyclopedia (briefly reviewed here) and the similarly sizable volume The Encyclopedia of Fantasy (which has seen only one 1997 edition, though there's a page of corrections and updates to which I have contributed in very small part.). 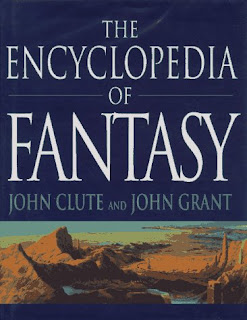 and the D'Ammassa volumes are almost certainly worth investigation and another good checking/alternate view source. None of these volumes is as useless as, say, Ed Naha's The Science Fictionary or Franz Rottensteiner's The Science Fiction Book, neither intended quite as seriously but both marketed as if they were, and certainly the strengths and weaknesses of, for example, the Ash volume (the first I read and owned) were a spur not only to me but those whose works above followed...

Despite its flaws, I find myself going back to Tuck more and more. Nichols/Clute (especially the online version) provides a lot more (and current) information, although I find it to be as idiosyncratic as Tuck. Between these and the irritatingly incomplete ISFDB, one can get a fairly good handle on the field.

I think that's fair...particularly when one considers how Tuck mostly (but not completely) avoids in-depth critique in favor of the facts as he could find them...and why I follow most others over the years in recommending it as still valuable for the years it does cover (some of the limited post-1968 material in Volume 3 is good, too).

Yes, ISFDB is basically a peer of the best, and is indeed at times frustratingly incomplete...but, then, unlike these others, it was never anyone's job...even as part-time as Tuck's was for him...

I used to have the Nicholls edition. What I remember most about it was the fetching photograph of Chelsa Quinn Yarbo. It also had a lot of information on British SF.

I'm not sure I remember the Yarbro photo (but you do make me want to go look it up) but that first Nicholls edition did indeed have rather a mixed bag of photo/illustration (Budrys was mildly annoyed that next to his entry was one for the decidedly minor film BUG, which he suspected was included mostly to allow for the still of a woman with a bug on her face). Both that SFE and all the subsequent ones have had a wealth of information on British sf...it is pretty interesting to reflect how many of these projects have come from British sources, even when (as with Australian Nicholls and Canadian Clute) the source was British by choice, or at least part-time thus...one rather important set I don't deal with is the three-volume set Gary Westfahl (a Yank) edited, rather prohibitively expensive...and, conversely, the MAMMOTH BOOK entry in this sweepstakes, rather the same size as most Robinson volumes (several hundred roughly digest-sized pages), and certainly the most economical of such volumes...I haven't ever really sat down with that one.