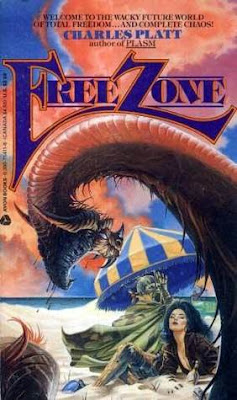 Charles Platt has been a mercurial and often challenging figure in sf, and on the fringes of it, for nearly half a century...in the last decade or so, he has been much more active writing nonfiction for Wired and Make: magazines, and for them and others about his passions, very much including cryogenics, than he has any kind of fiction, but he'd already contributed rather impressively to several fields, not least with Free Zone (1989), which he cites as his favorite of his own novels, and his reconstruction of at least part of the "lost" Alfred Bester suspense novel published as Tender Loving Rage (1991); I have to seek out Platt's collection of essays Loose Canon, or my copy of the novel itself, where Platt explains to what degree he had to replace from memory missing pages in the manuscript, which had originally been written, iirc, in the year or so after Who He?, Bester's similar contemporary suspense novel dealing with life in advertising and commercial writing. Bester's original title for the long-unsold novel was Tender Loving Rape, and the events of the novel were often as brutal as the title suggests, while also being Bester's only attempt at an odd sort of love story, at novel length. While Bester was exorcising some of his demons, including a rather jaundiced view of relations between the sexes (Bester was increasingly uncomfortable as a closeted, eventually mostly-gay man), this was already familiar territory for Platt, as well, albeit while Bester increasingly wallowed in misogyny by the end of his life, Platt in retrospect finds some of his unexamined youthful expressions of frustration, in such novels as The Gas and Sweet Evil, not altogether flattering nor comfortable. 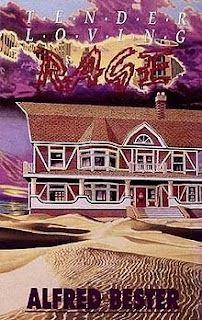 But it's easy to see why Free Zone might be Platt's pride and joy; he had the notion of attempting to incorporate, into one reasonably short novel, every major science fiction trope and cliche which came to mind; a chart at the back of the book cites 71 examples. Platt has always been most comfortable with at least a certain measure of humor to his writing, and Free Zone is breezy and deftly-written fun, as a libertarian socialist enclave, the FZ, in a future/alternate world Los Angeles is not only chivvied by the collapsing fascist state the US has become around it, but directly invaded and/or besieged by all sorts of fantasticated menaces, including aliens, and Nazis from an alternate Earth in which they were victorious in World War II. The heroine, Dusty McCullough, is the chiefest if relatively informal administrator of the nearly anarchist FZ, with a tech-genius/geek male life-partner, and friends and fellow free citizens (including gang bikers), pitted against the sentient dogs and troglodytes, among others, who attack them...also assisted by a hyper-sophisticated robot from the future, sent back and capable of seeing into multiple realities. Platt at his website reports that at least some readers would complain about the affectionately satirical nature of the work, whether because they felt Platt was showing disrespect to his predecessors, or because they wanted a more serious extrapolation along the same lines, or both. I'd suggest the novel moves at an excellent clip, a tribute to how well Platt studied his literary idol Bester, and makes seemingly every point it intends to make, even if he seems at times to think he's created the concept of libertarian socialism (which would've come as news to people ranging from the Anabaptists through the Communards to Noam Chomsky)...I've needed to seek out more of Platt's fiction for quite some time.
simultaneously.

I have FREE ZONE around here somewhere. Time to find it after your review. I read Alfred Bester's classic SF novels from the Fifties. The later books Bester wrote did not hold up (for me).

Well, RAGE is another Bester from the '50s, for the most part...though it has some of the jumbled effect of some of his later novels (though I know this directly only about GOLEM 100, as I've yet to read THE COMPUTER CONNECTION and the others, but one reads reviews). But I'd say it's worth reading, but not (any more than his other 1950s novels! Though I still need to read WHO HE? and the original GALAXY presentation of THE DEMOLISHED MAN, special typography and all) as impressive as his short fiction.

I've read WHO HE? which is also known as THE RAT RACE in paperback and I found it to be excellent. In fact I've reread it and I only do this with exceptional novels. It is definitely top flight Alfred Bester fiction.