Inasmuch as I (and several others) jumped the gun in suggesting a young reader's book (or several, as I did) a week ahead of time, I will leapfrog over the measly Magazine of Fantasy & Science Fiction/Tin House one-underappreciated-book at a time portions and go for the NPR 3 book handful...and to add to the questionability, I'll make it three books by friends I've essentially lost touch with, and with three books that demonstrate at least three kinds of stupid publisher trick. 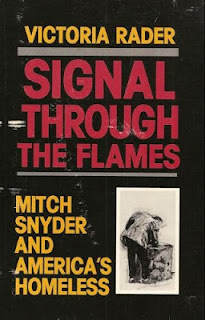 Victoria Rader's Signal Through the Flames: Mitch Snyder and America's Homeless (1986) got one of its too-few reviews in the journal Social Anarchism, by me. The really inept jub of publishing the book done by Sheed and Ward, the book arm of The National Catholic Reporter, didn't help...few POD publishers today could cough up a more typo-ridden or clumsy-looking package. But this was the first book-length study of the Community for Creative Non-Violence, pegged on Snyder but not to the exclusion of the rest of the CCNV, aince he had already had a tv movie based on him with Martin Sheen assaying the role, and not too long before Snyder's suicide...and as such, it remains at least a near-major book, and things haven't exactly changed so very much under the Reaganesquely hostile presidential administrations, very much including Clinton's, toward the problems of homelessness. 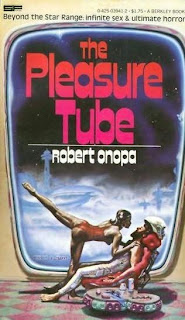 I actually haven't read Robert Onopa's The Pleasure Tube (1979) yet. I've lent out two different copies of this horribly packaged paperback, and haven't ever gotten either back; having bought a third copy just before one of my recenter relocations, it's in one of the boxes waiting for me to disinter it. Algis Budrys wrote one of his more interesting F&SF critical columns comparing it, and Onopa, to the Robinsons' Stardance, and how both books were among other things sf novels that were heavily informed by the practice of other sorts of literary and extra-literary art in such a way that we hadn't quite seen before. And, Budrys noted, Onopa had been forced from his editorial gig at TriQuarterly in the aftermath of tantrums on the part of someone, apparently including lodged-pole subscribers, who could handle the baroque adventure issue and the western fiction issue that preceded it, but couldn't tolerate Onopa's fine sf issue of TQ. Onopa was full of encouragement as a professor of creative writing at the University of Hawaii, and put me up for the campus writing award, the Myrle Clark, after I had a tough round of luck, including a stormy, brief tenure as the youngest editor of Hawaii Review, thus far and possibly since (I was foolishly proud that I'd managed to score such a gig when a whole year younger than Frederik Pohl had been when appointed editor of his two sf pulps in the latest '30s). For Onopa's part, fellow little magazine editor David Hartwell (in fact, Hartwell's little magazine of note had been the poetry-heavy The Little Magazine) was making his mark as an sf editor at Berkley/Putnam when he bought The Pleasure Tube ("organically a piece of experimental writing"--close paraphrase, Budrys again), then promptly took a job offer at Pocket Books and the successor at Berkley treated the novel as a very redheaded stepchild, slapping a remarkably ugly cover and insane slugline {"Beyond the star range, infinite sex and ultimate horror" or something vaguely Japanese shopping bag English like that--looking at the cover picture again, exactly that), killing it. Onopa has released at least two collections of short stories since, but, I believe, he hasn't published another novel. 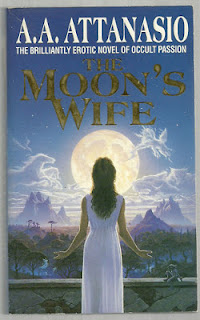 And Onopa was instrumental in hiring A. A. Attanasio as a graduate writing seminar instructor at U Hawaii in 1983, and in allowing me to take the 600-level class as a sophomore. Al was between the flush of great commercial success, even more in translation than in the original, of Radix, and his particularly British bestseller-chart riding with his Arthurian fantasy sequence, and was working particularly on a massive fantasy novel, working title Siggy Lindo (its protagonist's name). Having done several good-sellers with HarperCollins, Al's editor left (frequently bad, it seems) and the new editor had the kind of breadth of spirit and imagination as to apparently resent that Al, with that Y chromosone and all, might want to write a bugcrusher of a book about a woman, Siggy. The book had already been bought by HarperCollins, but that didn't mean she couldn't cut it to something like a quarter of its length, and retitle it The Moon's Wife (1993)...and otherwise made sure it sold so poorly that it was the first of Al's major-publisher books to never be issued in paperback, or get another US edition. It's still brilliant, even in its Reader's Digest form, but I still wonder what a full, finished Siggy Lindo might've been...or might yet be.
Posted by Todd Mason at 7/04/2008 03:01:00 AM

Todd. Remind me to include these on July 11th.

Actually, Patti, I'd think it'd work better for THE LONER post to be the 11 July entry.