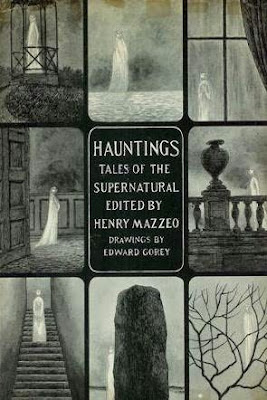 Contents, all illustrated by Edward Gorey:
Introduction: The Castle of Terror by Henry Mazzeo
The Lonesome Place by August Derleth
In the Vault by H. P. Lovecraft
The Man Who Collected Poe by Robert Bloch
Where Angels Fear by Manly Wade Wellman
Lot No. 249 by Sir Arthur Conan Doyle
The Haunted Dolls’ House by M. R. James
The Open Door by Mrs. Oliphant
Thus I Refute Beelzy by John Collier
Levitation by Joseph Payne Brennan
The Ghostly Rental by Henry James
The Face by E. F. Benson
The Whistling Room by William Hope Hodgson
The Grey Ones by J. B. Priestley
The Stolen Body by H. G. Wells
The Red Lodge by H. Russell Wakefield
The Visiting Star by Robert Aickman
Midnight Express by Alfred Noyes

This might be the most important book to me among all those I've read. It's certainly, among the four or five horror anthologies I read by the time I was eight, one of only two aimed at adults (the other was the Berkley paperback edited by Hal Cantor, Ghosts and Things), and the one which I remember best (odd how few women's stories were collected in either this or the Cantor, which featured only Shirley Jackson's "The Lovely House" in that wise, though Betty M. Owen's Scholastic Book Services anthologies and the Robert Arthur and Harold Q. Masur Hitchcock anthologies helped redress that balance). Happily for me, perhaps (foolishly) because of the Gorey illustrations, this one was classed in the children's section of the Enfield Central Public Library, where I found it easily enough (not that having to go over to the adult section to find, say, Joan Aiken's collection The Green Flash was any great trial).

This book introduced me to all these geniuses, though of course I'd heard of Sherlock Holmes before reading Doyle's detective-free mummy story here, and had probably seen adaptations of at least some of these folks' works on Night Gallery, or in Bloch's case, his Star Trek scripts, and the George Pal productions of adaptations from that other familiar name, H. G. Wells.

Despite the attempts by some reviewers to claim this book for the ghost story tradition, Mazzeo cast his net considerably wider than that, including revenants other than Doyle's mummy, devils (or at least one Assumes they're devils) in at least one of the wittiest stories here (John Collier lets you know, after all, with his title, and Manly Wade Wellman is only a bit more coy in labeling his tale of a place you don't want to be). M. R. James traps children with a toy, Alfred Noyes with a book; Joseph Payne Brennan, with his best story and one of his shortest, traps the childish, and even H. P. Lovecraft is represented by one of his least self-indulgent stories. Derleth shows what he could do, when not attempting to corrupt Lovecraft's legacy into a Christian metaphor, and Wells's stolen body story is an improvement over the "Elvesham" variation collected by Damon Knight in his The Dark Side. J. B. Priestly, a diverse man of letters, I would next encounter primarily as the author (and reader, for a Spoken Arts recording) of his essay collection DELIGHT, which was indeed delightful; Robert Aickman, while also expert on the waterways of Britain, remained for me and many others the greatest of ghost-story writers of the latter half of the 20th Century, even with Russell Kirk and Joanna Russ and Charles Grant and so many others providing excellent contributions to that literature. That obscure fellow James and E. F. Benson (not yet rediscovered for his comedies of manners, and only one of three prolific Benson brothers in the horror field) were the only writers shared by both this book and the Cantor; the Hodgson is a Carnacki story, a fine introduction to psychic investigators.

And the Gorey illustrations will stay with anyone. This book essentially introduced me to lifelong favorites Bloch, Collier, Benson and Wellman, and even the weakest stories here were rewarding; the Noyes, like the Brennan, is almost certainly the best thing he wrote (at least in prose or the uncanny) and a landmark in the field. I see where Gahan Wilson reviewed this for The Magazine of Fantasy and Science Fiction in 1969, Fritz Leiber somewhat belatedly for Fantastic in 1973...I shall have to seek out those reviews...for that matter, I will need to read this book again, eventually, and see how completely all of these have stuck with me. And, as far as I know, Mazzeo never published another book.

Any book with Gorey illos is choice. It does have a lot of the usual suspects, but I can imagine what an impact they had on a first reading -- especially accompanied by the Goreys.

Yes, about a third of the contents real chestnuts, but some of them less so 40 years ago, and certainly my doors were blown off, as were those of a number of other new readers in the area (one Amazon commenter who was of similar youth as I was upon first reading had to throw the book away, it unnerved him so much). Part of why I want to see (or reread, perhaps) what Wilson and Leiber had to say about the book, as folks who definitely were not introduced to the field with it.

Ever read Gorey's own anthology? Not as impressive a reading experience, but, oddly enough, similarly well illustrated. NEW YORK OBSERVER, iirc, rereleased it a few years back as part of their new line.

Which Gorey antho is that? I have lots of his little books -- they are so wonderful, especially the Gashlycrumb Tinies. I have the page for "K is for Kate who was struck with an axe" photocopied and on my office door.

I'll rescind my earlier comment...as an introduction to the field, the Gorey antho would blow doors off, as well.

For that matter, here's the contents of Hal Cantor's GHOSTS AND THINGS:

1st printing, 1962; Berkley #F666 (coincidence?). Includes:
"The Romance of Certain Old Clothes" by Henry James;
"Caterpillars" by E. F. Benson;
"Markheim" by R. L. Stevenson;
"The Ghost Ship" by Richard Middleton;
"The Novel of the White Powder" by Arthyr Machen;
"Night Doings at 'Deadman's: A Story That Is Untrue" by Ambrose Bierce;
"Running Wolf" by Algernon Blackwood;
"The Music on the Hill" by Saki;
"Phantas" by Oliver Onions;
"The House" by Andre Maurois;
"The Lovely House" by Shirley Jackson

And, hey, the Contento/Ashley SUPERNATURAL INDEX is Google-Booked, I hope with their approval, and through that I was able to find the first horror antholgoy (unless we count Grimm for children as an antho) I remember reading, The Ghostly Hand and Other Haunting Stories, which is actually not a terribly memorable selection, but does include Saki's "The Open Window" and T.V. Olsen's "The Strange Valley"...the Saki confused me, since I didn't understand the last line, "Romance at short nortice was her specialty" to mean lying creatively, as opposed to making out with someone, which she had clearly not done.

But I still am glad to know again of the contents of this 1972 antho, edited by Nora Kramer and published by Scholastic. Pity I didn't proof the last comment...

Proofing is over-rated entertainment on a Saturday. There's such amazing power in these childhood imprints. I've written elsewhere about my adoration for Shrieks at Midnight and it will never lose that power completely.

Yes, in your copious unoccupied time, I look forward to more Forgotten Book entries from you!

Gorey - illustrating Lovecraft? THIS I need to see.