Friday's "Forgotten" Short Fiction: Donald Westlake's "Call Me a Cab" and "Down Will Come Baby" by Jody Scott 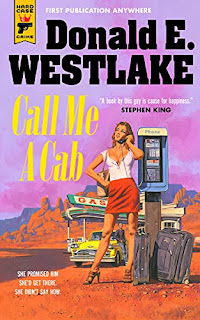 Ms. Jody Scott: "Down Will Come Baby" Escapade magazine, July 1968
Mr. Donald Westlake: "Call Me a Cab" Redbook magazine, June 1978
At left, the eventual (2022) release of the novel form of the Westlake.
We have here two unreprinted shorter works (essentially still true in 2022), as far as I can tell...and I have no good idea why they weren't ever given another shot at finding their audiences. The Scott is cut down from her first novel to about a 40K-word novella, edited into its current form by Escapade editor Barry Malzberg in a marathon session that, if I remember correctly, halved its length (and was so down to the wire that the paste-up manages to repeat a few paragraphs and puts a page or so slightly out of order). It's still a compelling, possibly somewhat autobiographical account of a young woman, unwilling to fit anyone else's expectations of what her behavior or aspirations should be, but not any less insecure for that, and with a keen sense for what sort of bullshitters of all stripes (student radicals, burnouts, artists, businesspeople, et al.) surround her on and around the Berkeley campus on the cusp of the repression of the Free Speech Movement and what followed. Having such a keen sense doesn't keep her from falling for a bullshitter or two, mind you. None of the adorableness of The Catcher in the Rye, much less The Strawberry Statement, here...a lot of the people around her are playing for high stakes, and usually not fairly...even when the stakes involve putting up with them till one's soul shrivels. And there's no stalking away in morally superior dudgeon, either, for her...there is realization of the kinds of compromises we all make with each other, institutions, life. 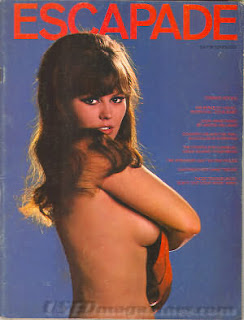 Jody Scott sporadically published further fiction, including two novels released in book form...Malzberg recommends them here, from a column of "forgotten" and curious items in The Magazine of Fantasy and Science Fiction.

As the respective covers suggest, a somewhat larger clothing allowance for cover models at '70s Redbook than at '60s Escapade, but similar budgets for eyeliner. 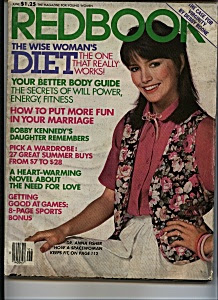 Donald Westlake was also an iconoclast, albeit one who played the game in the publishing world more sustainedly. Like Scott, not one to suffer fools gladly in his fiction, he offers here a charming if slightly improbable romantic road story, in which a a capable young woman can't quite figure out her ambivalence toward marrying her fiance, who awaits her arrival from NYC to LA with her yes or no. Being picked up by a gentle and Mostly pro-feminist cabbie, himself a youngish dropout (31 to her 29) from the fast lane who now pushes a hack for his father's small company, she has a brainstorm...rather than fly across country, and have to make up her mind and formulate her reasons in six or seven hours, she hires the cabbie to driver her across country, giving her a week to get her thoughts in order. Along the way, they run into a not too surprising but well-described set of circumstances, including a demonstration of how important her position is that gets them into a discussion of class and sex that unnerves them both, and a growing mutual attraction despite their best efforts otherwise. Her decision leaves her in a position not altogether unlike that of Scott's protagonist, but much more sure of herself and far happier, if not unalloyedly so...this notion of not conforming to other's expectations and desires has its cost, even if the fiancee and the cabbie, at story's end, will likely be at least friends going forward.

Westlake makes notably much of how similar to the point of identical Holiday Inns in the late '70s were to each other, so I have to wonder if this not altogether flattering product placement (it never occurs to them to stop at a Ramada nor a Quality Inn) wasn't a means of ensuring a roadtrip by Westlake might be written off taxwise as research. But, as I mentioned, it's a charming story, with only one brief bit of too-cute comedy that Westlake occasionally indulged in in his early work, the rest up to his usual standards of amused, sharp observation.

Perhaps Westlake thought his "novel" (as Redbook calls it) was too explicitly tailored to a romance-oriented audience, or perhaps he thought he might expand it further (though it's hard to see how it would profitably go beyond the 25K words or so of its current novelet state), or just wouldn't fit in among his more criminous short fiction in his relatively few collections. [Late bulletin (2012): Apparently, Westlake wrote this one up as a filmscript or at least as a treatment, and there might well be an actual novel-length manuscript version among his papers, as well.][Later bulletin (2022): And so there was.]

They are both awaiting rediscovery...the woman writer's sharply critical condemnation of human exploitation in a men's skin magazine (albeit a sophisticated one), and the man's slightly but not altogether more muted tribute to untraditional values and feminist and pro-feminist masculist aspiration in a fairly traditional women's domestic-life magazine (albeit one with a proud and, for at least some years further, sustained tradition of offering fiction, including ambitious fiction, long after most of the competition had dropped same. Albeit a "novel" as long as Westlake's, even when written by a writer of his stature, was presented in microprint in the back pages of the issue.)

You could do much worse.

See Patti Abbott's blog for links to other "forgotten stories" for this week. And thanks to Barry and Joe for letting me among others know of the existence of these stories, and providing copies of them.
Posted by Todd Mason at 4/09/2009 11:17:00 PM

I never heard of "Call Me a Cab" and I thought I was on top of Westlake's work... I'm sure this will make its way into an anthology at some point.

Can't believe a Westlake story lies unreprinted. But I guess the sheer number....

Howdy! I'm working with the estate of Jody Scott to reprint her stories and would LOVE to get ahold of this issue of Escapade. Please contact me if you have a copy - I could scan it and send it back to you: mchristianzobop@gmail.com