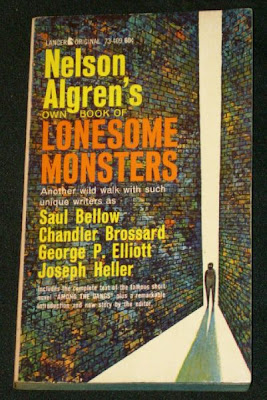 From the Contento Index:

So, you want to talk noir...if there's a concept in "darkness" that can be as argued about and misconstrued as noir, it's probably "black humor." Grotesquerie, biting satire, modest proposals. This book is a handsome sample of what was available in 1962, assembled by the writer best remembered for The Man with the Golden Arm, but who should be remembered for a much wider range of work, including the story that he immodestly caps this anthology with. As with Joe David Bellamy's SuperFiction from a decade later or Dwight Macdonald's fat Parodies from a couple of years before, this has been a widely-distributed anthology touching on the fantastic and the grimly realistic, surfiction and some stuff that at least verges on metafiction. Saul Bellow, not usually thought of as a comic writer (though his wit was just one of his many facets) delivers what might be the slightest and lightest piece here; Hughes Rudd, in the 1970s the acerbic anchor of the CBS Morning News (which was actually more or less a news program, imagine) gives him a run for that laurel (any joking aside, CBS News had several fictioneers on staff in those years, including Reid Collins on the radio side). George Elliott's "Among the Dangs" is straight-up science fiction enough to have been reprinted in The Magazine of Fantasy and Science Fiction before its appearance here, and Pynchon's "Entropy" might've been squeezed in without too much forcing the issue. The Heller is from a fine, pioneering Lion Books all-originals paperback anthology, and Joan Kerchoff probably shouldn't be the only woman to be represented in the book (how many Dororthy Parkers did he pass by? No Mary McCarthy?), but it's a solid, grimly funny read (and not only grimly funny) under either of the titles Lancer Books, that ultimately doomed publisher, chose to reissue it (Bernard Geis Associates did the hardcover, which I've never seen). Somebody else should; it's been gone too long.

As always, a pleasure reading your words.

Thanks, folks...it's a pleasure to mention such a book.

That looks like a book I have to have! Wow -- what a great selection of tales.

Ah, Todd, you probably know that the use of "noir" (as a positive statement) was first added into "humour". André Breton edited an anthology of "humour noir" (or some such; I'm not sure what it was in French) in 1940, and it was his Surrealist friends who edited Serié Noire and declared the American crime films were films noirs. The Wikipedia article says Breton's book was the first instance to mix "humour" and "black".

(Yes, there had been some usage of "film noir" already in the thirties, but I think it was a negative comment, and a politically biased, aimed at Leftist film-makers, to show their films were too bleak and too dark.)

Yes, it was more often referred to as "gallows humor" in the States, at least, before the adaptation of "black humor" as a label...and while I knew of the Surreealist connection to the SERIE NOIRE, I had either forgotten or not come across reference to Breton's anthology Anthologie de l’humour noir (1940)...thanks for that! I suspect that Algren's book was one of the popularlizing sources for the use of the term in the US.

I don't really know what Breton's anthology contains, but it would be really interesting to see.

Les auteurs de l'édition définitive de 1966 (of the Breton ANTHOLOGIE...), as per the French WIKIPEDIA article:

...while the Friedman anthology, which I had heard of but haven't read, was a 1965 Bantam offer, thus three years further along than Algren's...though perhaps better-distributed:

Macdonald's PARODIES doesn't seem to be detailed online, except perhaps in WorldCat.

Thanks, very interesting. Lots of familiar names to those who have read Breton's Surrealist manifestos.

SUPERFICTION seems to be mostly about postmodernism.

Well, the surfiction/metafiction/fantasticated edge of pomo, perhaps. Hence its appeal to William Contento, I suspect. Certainly the reason I first picked it up all those years ago (it certainly wasn't its reasonable price, but I first encountered it in a library).

I used to have this about 15 years ago and loved it.ooh, i've gone all nostalgic!

Thanks, Paul...at this point, though, which of the books under discussion did you have a decade and a half ago, the Algren?

Brimgs back many forn memories Todd - have a wonderfully beat-up copy of my folks' shelves back home in Italy. Cheers.

I wonder if the UK edition had a completely different cover, or did you have a copy of one of the Lancer editions in Italy?