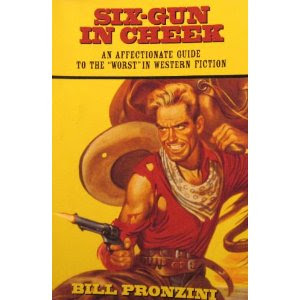 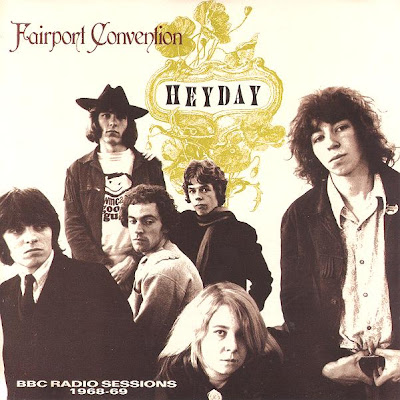 Bill Pronzini had assembled both Gun in Cheek (1982) and Son of Gun in Cheek (1987; perhaps sadly not Gun in the Other Cheek, which might be accused of echoing Ellison or the Secret Policemen) out of his fond memories of some of the worst in crime fiction, picking through his extraordinary personal library and beyond, and Mysterious Press published those, perhaps with not the greatest sales among his biliography but I doubt they actually lost money for anyone...but there wasn't as much publisher interest in a companion devoted to the similar worst of western fiction till Steve Stillwell and Bruce Taylor convinced him to do it for their Crossover Press in 1997, publishing a limited edition with minimal distribution...I have copies because Pronzini was willing to offer copies for sale from his own stash, and might still; interested parties should drop him an email at pronhack@comcast.net.

It's a pity that this book has been so obscure from jump, as it's more relaxed than its companions, and draws on at least as broad a swath of bad pulp, lending-library, paperback, and other sources over the last century...and so as with the other volumes, you get a good sense of a lot of the less ambitious, I think it's usually fair to say, realms of publishing (and perhaps a bit saddening where not fair, as older writers faded and newer ones took on more than they could handle, all put on public display when they really shouldn't've). Pronzini doesn't spare himself, either, in describing at reasonable length one of his least-proud moments, a collaboration with Jeffrey Wallmann on one of the lead novellas published in the revived late '60s/early '70s Zane Grey Western Magazine, under the byline of Grey's son, Romer Zane Grey, as they all were for no compelling reason (at least the ghosted Mike Shayne novelets in stablemate Mike Shayne Mystery Magazine were all attributed to the Davis Dresser pseudonym put to the original novels in the sequence, "Brett Halliday"). And Pronzini isn't the only good western writer tagged here for sins, or at least what Pronzini enjoys dubbing Alternative writing. Sadly, I can't find again, among the many examples of Overly Colorful abuse of antiquated and utterly fabricated language attributed to various stalwart and blackhearted characters, the most ridiculous villain's name...I'll add it to the post when I locate it again.

Pronzini notes, not incorrectly, that the western is an American artform, much as hardboiled crime-fiction was pretty much born in the US...but hardly the only art born here and not the only one to also find excellent practitioners abroad (Jorge Luis Borges alone, with his stories of Argentine ranchfolk and their colleagues, would be enough of an argument against US exceptionalism). Musically, jazz, blues, bluegrass and rock music took shape in the States, as well, among other forms, and when British bands could show, particularly in the 1960s, a facility for similar work, sometimes Well-Meaning folks such as record producer Joe Boyd tried to steer them away from exploring American music too thoroughly...so a lot of the songs, collected from late '60s recording sessions for BBC Radio shows for the various forms of Heyday over the last couple of decades, were never given full studio recording by Fairport Convention, the most important and longlived of the UK's folk-rock bands, in most ways the correspondent to the American Byrds. Boyd takes the blame for that in his liner notes, at least in part (and he calls such Canadian composer-performers as Joni Mitchell and Leonard Cohen American, but perhaps they had emigrated at the time). The grumpy young bandmembers (see photo above), already having faced tragedy (several members of the original lineup were killed or injured in a traffic accident before these recordings, after their eponymous first album) and weren't yet quit of it (their second female vocalist, Sandy Denny [above], would die in a fall down a stairwell shortly after leaving the band to form her own, Fotheringay), but they could (write and) record a jokey "If It Feels Good, You Know It Can't Be Wrong" as elegantly as they could a bitter "Reno, Nevada" (a composition by the doomed Yank Richard Fariña), an awestruck original "Shattering Live Experience" as deftly as the similarly besotted Cohen love song "Suzanne"...and such songs of uncertain and lost love as Mitchell's "I Don't Know Where I Stand" and ex-Byrd Gene Clark's "Tried So Hard." The latter-day expanded editions are simply an even better reason to seek this out.

From a few months earlier than the BBC recordings, a slightly rough but quite pleasantly improvisational performance of "Reno, Nevada" by the original Fairport lineup for French tv, featuring singer and multi-instrumentalist Judy Dyble and drummer Martin Lamble (one of the auto-accident fatalities):

Six-Gun in Cheek is hilarious. I need to pull out my copy for a refresher.

I like GUN IN CHEEK just a little better than SIX-GUN IN CHEEK. But both books are classics.

A nice overview, Todd. And I do remember that Fairport Convention.

Well, George, as I say, SIXGUN is more relaxed...there's a slightly rushed feel about GUN that I like less well. And I like them all.

Yes, Patti, Fairport never fully recovered from losing Richard Thompson after the album FULL HOUSE, even if the band that continued went on to make very pleasant music, and reunited with surviving ex-Conventioneers at various one-off occasions (as the online videos will demonstrate). The loose agglomeration album THE BUNCH, from about the time Denny was leaving FC, is also quite worthwhile, not least as the first time, iirc, Richard and the soon to be Linda Thompson recorded together. I don't agree with many who insist that the earlier Judy Dyble (and Martin Lamble) version of Fairport was simply a British clone of the Byrds and Bay Area bands, despite drawing on similar sources (and Thompson's love of jazz guitar licks)...not Too many autoharpists among Moby Grape and Spirit, at least that I recall.