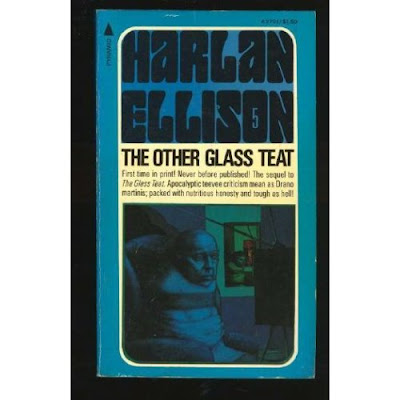 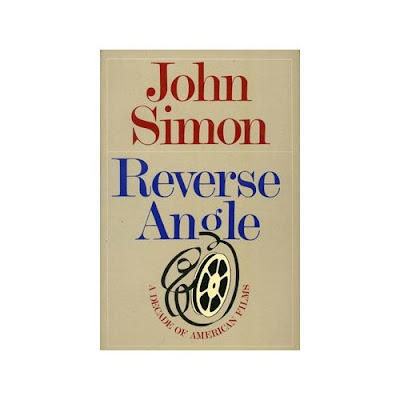 Two of the more influential critical volumes in my reading so far, from often maligned critics (I remember a typically inane parody of Simon by David Sedaris in The New Yorker, too representative of both writer and magazine), about which I will have more to write after doctor visits and other business this morning!

And now we dig in a little. Both of these books are out of print, which is ridiculous, but some of Ellison (notably a new edition of Harlan Ellison's Watching with a Leonard Maltin intro) and much of Simon (huge compilations of even longer stretches of his film crit) are still earning some royalties, one hopes. Both men are seen as cantankerous, but are both relatively free of overarching ideology so much as personal conviction in their reviews...which by some benighted folks is a debit. However, both bring a wide-ranging knowledge of the arts (and beyond) to their work, and an incisive writing style, and a love and knowledge of their chose areas of study...even if Ellison (probably in Watching) wonders if Simon isn't just too divorced from the art to be a fully-successful critic; Simon doesn't return that favor, but in Reverse Angle does assess, rather evenhandedly, such other film columnists as Pauline Kael, Andrew Sarris, and the fellow I take to be Simon's greatest model, James Agee (some of whose own critiques have been re-released in the last decade). Ellison's greatest model might be his predecessor not only as brilliant fiction-writer and (often embittered) a/v script-writer but as visual/dramatic media columnist for The Magazine of Fantasy and Science Fiction, Charles Beaumont (the editor of the subject of Jeff Segal's guest FFB from last week, below)...Beaumont, with supplement from William Morrison reviewing stage drama, was F&SF's columnist in the late '50s.

Ellison's "The Glass Teat" was his first regular tv column, for the Los Angeles Free Press around the turn of the 1970s, and The Other Glass Teat almost didn't get published, despite the The Glass Teat being a rather solid seller for Ace Books...Ellison notes that one of the columns collected in Other managed to reach Spiro Agnew, in which the Veep was accused jokingly of masturbating with copies of Reader's Digest, and Agnew let it be known through back channels that He Didn't Like This, and Ace put the first book out of print, and cancelled the contract on the second, allowing Pyramid to have it as one of the new books in their mid-1970s Ellison program (with Agnew by this time already facing his post-political career). This volume includes his reviews of some pretty impressive examples of the good and bad of television of that time, and a valuable example of a script he was commissioned to do for the Young, Hip, Relevant series The Storefront Lawyers...with co-lead Zalman King, of all people, in his pre-softcore (more or less) career (he did do some biker movies around then). And Ellison gets to note how the episode is messed with. The instructional aspect is comparable to his essay "With the Eyes of a Demon...".

Meanwhile, Simon keeps his wit and grace about him even when excoriating some of the worst excesses of the films of the '70s and '80s. His praise for the advances of the art, including the works of Ingmar Bergman and consistent Rara-Avis punching bag The Long Goodbye (as scripted by Leigh Brackett from the Chandler novel and directed by Robert Altman), are at least as searching and enthusiastic as his rending of the gauche and self-indulgent, including such monsters of self-indulgence as Jean-Luc Godard and Barbra Streisand, two of his targets which seem to get him in the worst trouble with the shallow of varying stripes. And, of course, he was in a short film for Saturday Night Live some years back.

Both men are feeling their years, these days, and neither is actively publishing film or television criticism (though Simon is still, I believe, writing about stage drama even after being clumsily fired by New York magazine a few years back. Neither has nothing left to prove, however, and digging into their work, and the work they admire, you will be rewarded if you explore.

Ellison's TV criticism is generally spot on and well worth the time to read. And, amazingly, TV is still as inane as ever!

Actually, Scott, I'll agree that the aggregate of television is as inane as ever, but since we have so much more of it, the small percentage of good material actually has swelled in absolute terms, as well. There was a bit of a remarkable time around 1998-2001 where even the bubblegum was starting to get remarkably good by the usual standard (a series like the Yancy Butler trifle WITCHBLADE would've been welcome relief in 1977 or 1981), but that was done in by political and economic events in part, I strongly suspect.

Witchblade! I loved that show. Pity about Butler's rehab redundancies. It had a lot of fun. And Keith Moon's drums (supposedly).

Hm. I don't remember the drums clearly, but remember her improbably large apartment was pretty cluttered. And one has to clarify between the Butler series and the currently freshly-imported anime from Japan.

When MAGNUM PI was one of the few decent entertainment hours on US television, it would've shone like a diamond...as it was, surrounded by the likes of THE HUNTRESS and 100 CENTRE STREET and THE SOPRANOS and ONCE AND AGAIN and BUFFY and such, it was, by me, pretty good.

I enjoyed reading Harlan Ellison's critiques of television in both THE GLASS TEAT and THE OTHER GLASS TEAT. No one was writing that kind of criticism back then. John Leonard (aka, DEEP EYES) was the only television critic to come close to Ellison's insights.

Yes, it was a sad loss, John Leonard's...he and Guy Davenport at about the same time, it seems to me. Michael Arlen and Pat Aufderheide and a few others have had their moments, but I'd have to agree about Ellison and Leonard as the most consistently interesting television critics I've read.