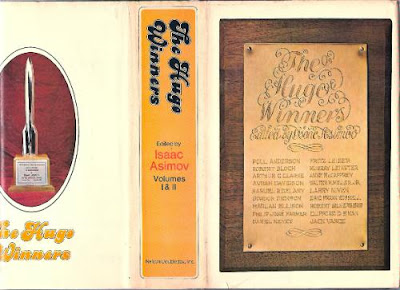 Somehow, to someone who started reading sf regularly in the 1970s, the notion of The Hugo Winners volumes being out of print is remarkable, to say the least...in fannish argot, croggling. Even the third Asimov volume, and the much more recent Connie Willis and Gregory Benford-edited volumes which followed Asimov's death, are all out of print...but the similarly astounding decade-long lack of in-print status for The Science Fiction Hall of Fame volumes was rectified by Tor a few years back, and they're still in print today. For now.

Collecting the short fiction which won the World SF Convention polls, with their writers given variations on the trophy pictured on the back cover of the SFBC edition, named in honor of the pioneering editor, publisher and writer Hugo Gernsback, seemed a pretty natural idea. Asimov brought a sense of fannish patter and his toastmaster's skill to the introductions to the three volumes he oversaw; he was originally chosen to edit (as much as editing was needed) as the biggest name in sf who had not ever won the award, which fate he inveighed against with mostly good humor in the individual story introductions as well as the general introductions to each volume, collected as jacketed above for the perennial Science Fiction Book Club omnibus. One clumsy oversight by Asimov, leaving out Fritz Leiber's "Ship of Shadows" from the second volume even when its award-winning status is noted in the appendix, is even worse than the clumsy mistitling of Robert Bloch's "That Hell-Bound Train" as "The Hell-Bound Train" in the first volume...and both are more than indicative of the lack of useful attention being paid to these products by Doubleday, in preparing the trade editions or revising them for the book club.

The stories that won the awards (and since Brian Aldiss's "Hothouse" series of stories won the short-fiction award in 1962, no individual story was selected as representative for inclusion in the book, rather another slight) are at this remove an impressive bunch, though not uniformly so...Bloch's story was also the first no-bones-about-it fantasy to win what began its run as the Science Fiction Achievement Award, though the "Hothouse" cycle, Avram Davidson's "Or All the Seas with Oysters" and the Jack Vance "The Dragon Masters" were almost textbook examples of what was meant by science fantasy, when that term was not being used to cover the whole range of fantastic fiction, as speculative fiction and "fantastika" are often used today. Harlan Ellison's "'Repent, Harlequin!'" can seem a bit precious, in a way that his "I Have No Mouth..." certainly still doesn't, even if the other work in the latter's vein since, from Ellison and others, has taken some of the edge off that story's blade. The Daniel Keyes has always trembled on the edge of excessive sentimentality without falling in; the Leiber which is present, another utter fantasy, is still as powerful a fable now as it was then. Clifford Simak, Arthur C. Clarke, Poul Anderson, Samuel Delany, Robert Silverberg and Gordon Dickson are well-represented by the stories offered...if Anne McCaffrey and Larry Niven are perhaps a bit less so, they also turned out to be perhaps more limited artists than the others, including the modestly-demeanored but diversely-talented Dickson (and it's rather sad McCaffrey is the only woman writer in the book, and Delany the only non-Caucasian, but that's how the field was rewarding folks at the time, and the writers were largely male and overwhelmingly pale)...the Nebula Award volumes had the space to feature all the stories on the shortlists from the final ballots, making for a better representation of the best work in the field, I would certainly argue...but this was and remains a vital book, as do its sequels, and that there's no ebook nor in-print edition for any of the five volumes I've seen really should be addressed.

I've read all these stories at one time or another. These are fine collections.

Their only flaws (publisher's nonchalance, essentially) indicative of why they're out of print...

I have that book and remember it fondly.

These books used to be staples of the SCIENCE FICTION BOOK CLUB. You could get these fat tomes for a buck!

Hard to believe something like that could be OOP. There's just too much stuff I think; we're glutted. No wonder it's so difficult to find the gold among the dreck.

I always did wonder, Evan, when I got it as part of my introductory 4 books for 10c offer for the SF Book Club, where "Ship of Shadows" had gotten to...

Kate, maybe so...and, of course, the hipster culture enjoys pretending to Dig the past more than actually dealing with the past, even its best work...and too many others are either uninterested or give up entirely on trying to explore the older work, either in favor of the newer or along with the newer. It doesn't help that the considerably less than most brilliant work of the past (hello, again, Mr. Lovecraft) is so often trotted out as the best of its era, as no doubt Stephen King will misrepresent ours for future generations.

And speaking of less than most brilliant, sorry for anyone who suffered through the typo-laden draft I accidentally had on autopost all day...

I'm pretty sure my four books were John Varley's THE PERSISTENCE OF VISION, THE HUGO WINNERS, and...possibly...Asimov's FOUNDATION TRILOGY and I can't for the life of me remember the fourth...perhaps looking at the 1978 ads will jog the memory...I"m pretty sure I picked up Alfred Bester's THE DEMOLISHED MAN later, with the hideous SFBC cover and listed at $1.98...my father had picked up an armload of SFBC editions of the HALL OF FAME, Sturgeon, Ballard, Ellison, Asimov, WORLD'S BEST SF annuals edited by Terry Carr and Donald Wollheim, and others at a tag sale some years before, and they were a core of my sf and fantasy reading in those years.

For more information on Hugo Gernsback check out a recent biography that is available on Amazon.

I found this document when we closed down Gernsback Publications in 2003. It was an old ms that I edited and produced as a book.

Follow the link and you can go to the book and thanks to Amazon’s “look inside” feature, you can even get an idea of what it covers.

Hope you find it interesting.

The book is also available as an E-book for the Kindle or your PC or Mac at Amazon. Here is the link:

Other Hugo Gernsback Titles available at Amazon as e-books for Kindle or your PC:

For more information feel free to contact me, Larry Steckler, at PoptronixInc@aol.com