The best television music program, at least on late-night television that I'm aware of, probably will remain the 1988-1990 Sunday Night, later known (to allow syndication customers more freedom of scheduling for this series, which was shown on NBC "owned and operated" stations and syndicated to individual stations in other cities/markets) as Night Music. The Wikipedia page for this series is pretty damned good, and cites the cast of the best episode of this often-brilliant series as including the Sun Ra Arkestra, Al Green, the Pixies, Arthur Baker, Sister Carol and Syd Straw, doing their things individually and then in various combinations. Sadly, the Arkestra, the Pixies, et al. backing up Al Green doing "Let's Stay Together" doesn't seem to be online, and no one has released a legit home video of the series, which was hosted in its first season by saxophonist David Sanborn and ex-Squeeze pianist Jools Holland, and in its second by Sanborn alone; Holland has since returned to the UK and conducts a similar, but not quite as engaging, series called Later , which currently can be seen in the States on the Ovation cable channel. However, from the same episode, here's some of the Sun Ra Arkestra's set, including Al Green on cowbell in the closing credits (and since this video has since been set to "private"/restricted access, here's another example from the episode below it):

From that episode, the Pixies' "Monkey Gone to Heaven" and "Tame":


Meanwhile, earlier in that season was the episode with Philip Glass, Loudon Wainwright III, Pere Ubu and Deborah Harry...Harry's "Calmarie":


...and Pere Ubu's closer, "Waiting for Mary," with Harry and Night Music Band members backing them: 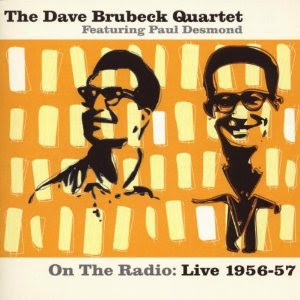 Meanwhile, the Acrobat Music Group collection of airchecks from CBS Radio concerts by the Dave Brubeck/Paul Desmond quartets of 1956 and 1957 demonstrate very well how Not to introduce a band, as the CBS staff announcer is a klutz, at best...the 1956 quartet featuring the fine Joe Dodge on drums performing in two sets from the Basin Street East in New York City (the latter's recording is notably crisper than the earlier's), and, from Chicago's Blue Note nightclub (and with a notable but not intolerable drop in audio quality), the 1957 version featuring the transcendant Joe Morello on percussion, with both groups rounded out by Norman Bates (possibly the inspiration for Robert Bloch to name his most famous character, perhaps even from hearing one of these airchecks...and, no doubt, the source of endless ribbing for Bates very shortly thereafter..."No cutting contests with you, Norman..."), as Gene Wright, the bassist for the quartet's most popular and innovative years, would join in 1958 (though, as the booklet for this disc notes, Morello and Wright were on hand for a 1956 radio broadcast with Leonard Bernstein, so clearly the most memorable quartet was foreshadowed). The big treat here is a fine improvisation, "A Minor Thing," which as far as the packagers know was never again recorded by any version of the quartet. But despite some noisy audience members on a couple of tracks around the edges, the playing is uniformly impressive here, and it's a very pleasant set of recordings to have, whether a confirmed fan such as myself, or someone wanting a sense of what this group was about, as it moved from success to (occasionally controversial) megastardom in jazz.
Track List:
Theme (The Duke) and Intro #1
Stardust
Gone With The Wind
Stompin’ for Mili
Out of Nowhere
A Minor Thing
In Your Own Sweet Way
The Trolley Song
Intro and Theme #2
Love Walked In
Here Lies Love
All the Things You Are
Theme and Intro #3
I’m in Dancing Mood
The Song is You

For more of this month's "Forgotten" music, please see Scott Parker's blog...only it seems Scott has taken a vacation from hosting the links, so here're the other FM links I'm aware of:

Bill Crider: recitation records (as one of the predecessors of rap?--perhaps, as with opera recitative, by example, but less directly so than talking blues and jazz and poetry recordings)
Jerry House: Cisco Houston and collaborators
Randy Johnson: Surfing with the Alien (and more), Joe Satriani
George Kelley: Come and Get It: The Best of Apple Records
Evan Lewis: "The Lone Teen Ranger" and other "Jerry Landis" (early Paul Simon) recordings (as Jerry House notes, Simon and Garfunkel first recorded as "Tom and Jerry")
Charlie Ricci: Festival of the Heart by John Boswell (well, close enough to a FM selection!)--likewise:
Patti Abbott: "Am I Blue?" by Hoagy Carmichael (and, slightly unfortunately musically, Lauren Bacall)
Posted by Todd Mason at 12/30/2010 10:00:00 AM

I have one up now, Scott, on folk singer Cisco Houston.

Now why the hell did I type Scott?

Anglo names with too many consonants. Also, some people seem to take my listing links when the roundelay-originators don't as unseemly poaching...your dybbuk wanted to suggest as much...

Wow, Pere Ubu and Debbie Harry! Cool stuff. My dad always listened to Brubeck when I was a kid, so it's ingrained in my skull.

These are some of my very favorites. I listen to Brubeck at least once a week to soothe my soul.

Yup. Every Sunday night for two seasons. And Debbie Harry's folkie roots and interest in Francophone culture is never unwelcome to me.

Of course, I missed most of the great jazz series of the late '50s/early '60s (JAZZ CASUAL, THE SUBJECT IS JAZZ), catching up when I can, or the eclectic shows such as the initial run of OMNIBUS and THE SEVEN LIVELY ARTS...though I did catch FROM JUMPSTREET and a number of the better episodes of the likes of AUSTIN CITY LIMITS, SESSIONS AT WEST 57TH, and SOUNDSTAGE, and such...by the time I could reasonably run a record player, my folks had two Brubeck Quartet records (among about forty or so jazz albums)...I now have about 50 or so Brubeck Quartet (and DBQ members') albums. Among my several hundred jazz recordings, probably at least five hundred or so. That's how that dynamic goes with me.

It's amusing how many would-be hipsters wanted to dismiss Brubeck, particularly, as a poppy sellout or what have you...only to find that he was pretty widely respected by even some of the nastier artists in the field, and that he made a point of celebrating and defending avant-garde folks such as Cecil Taylor (and deeply influencing such next gen avant-garde such as Anthony Braxton and Oregon) when some of those same "hipsters" (and some of the nasty pros) were doing what they could to stymie and ostracize them (likewise John Lewis of the MJQ and Ornette Coleman, among others).

Jazz Goes to Junior College is one of my favorite all-time albums, and I recently picked up a few others from this era. That radio stuff is mighty tempting.

It is, indeed. Aside from the unique composition, I like the recording quality of the best tracks better than the early concert albums...though I admit I've only heard those on my vinyl LP copies.

Brubeck: I'm considering buying Live at the Monterey Jazz Festival 1958-2007 that was released in '08. Dave B rules as the kiddies once said. It's nice to know he's still around at 90.

Indeed, David...though clearly not only did it appear in repeats on US VH1 but in Germany as well. That a show from that late in the day wouldn't've secured home video rights to the performances seems a bit staggering, but such production dinosaurs as Lorne Michaels and NBC perhaps could be counted on for letting such things get by them.

I've picked up via mail order some items to fill in some of my holes in the '50s Brubeck Quartet discography, including a compilation CD with includes JUNIOR COLLEGE, and will certainly consider the NEWPORT album shortly.

Do you remember The International Rock Awards that was broadcast around the same time? It lasted two years and thankfully disappeared. The performers couldn't even take the lame show serious and made fun of it while presenting the forgettable honors. (Or that's my memory.)

No, I suspect that if it was playing where I might've seen it, the ads suggested the guest list wouldn't've interested me. (Much as I find the attempts by GLEE to make the Journey songbook "standards" about as useless as everything else about that series.)

that's a Brubeck set I've not heard, and am sorely tempted. I saw no mention in your review - perhaps I scanned it too quickly? - of Desmond, whose playing I always find to be understated but compelling.

I mention Desmond (and Brubeck) themselves only in the first sentence...the quartet began life as the Paul Desmond Quartet...but Desmond's failed attempt to grab a brass ring on his own shortly thereafter led to him returning to a Brubeck Quartet, and Trio (with Cal Tjader), and Octet, and so on till 1968 and the formal dissolution of the Desmond/Brubeck/Morello/Wright quartet that had been the commercially most successful and simultaneously one of the most adventurous bands in jazz for nearly a decade...Brubeck formed a new quartet with Gerry Mulligan (and Jack Six and Allan Dawes)almost immediately thereafter, and Desmond joined that group for a tour and an album in '71, and the Morello/Wright Quartet reformed for a 25th anniversary of the PD/DBQ album in 1974. So...give in to temptation, Rick...it calls...

Speaking of Desmond, I have The Complete RCA Recordings of, a 5 CD set: Desmond Blue, Take Ten, Glad to Be Unhappy, Bossa Antigua, Easy Living. It's a cardboard boxed set with integrated booklet and CD sleeves. I usually put it on, sometimes on random on the tray player, when I want something pretty mellow and relaxing.

I like those better than the CTI album or two Desmond did, certainly...though his TWO OF A MIND albums with Gerry Mulligan I like even better.