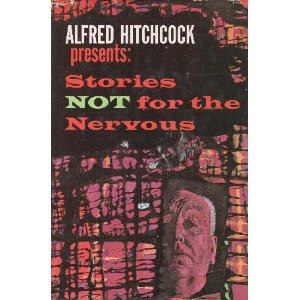 So, I indulged in a bit of nostalgia, and picked up a used copy of this in a Doubleday Book Club edition (whether from the DBC, the Literary Guild, the Mystery Guild, or even the SF Book Club, I know not). And, as the table of contents above might suggest to you, this book is about as rewarding a read now as it was as part of my continuing discovery of the "Hitchcock" books as a child in the 1970s, when the hardcovers were widely available in libraries and the Dell paperbacks, usually halving the contents into two volumes, were often put back into print if they slipped out of availability. Though my previous edition, deep in storage, was a used copy of the Dell paperbacks.

Robert Arthur was a deft and ingenious writer in nearly every medium available to him...screenwriting and radio drama as well as prose...one of his most prominent editorial gigs before taking on the AHP project in 1955 was the magazine The Mysterious Traveller, named for his radio drama anthology series. Hence, quite likely, the presence of a Mike Marmer story here, as Marmer was a very busy television writer into the 1980s, albeit one whose work on the Smothers Bros. series and Get Smart! probably was more rewarding than his late work on Punky Brewster. But, more importantly, memorable fiction ranging over the fields of suspense, mystery, horror, fantasy and sf were taken from classic and relatively contemporary sources. The sheer number of important writers these anthologies introduced me to, with eminently entertaining stories, was simply joyous...even when I'd come across a few of the stories before, such as Brennan's "Levitation," which remains perhaps his best story I've read. Arthur, as would his successor Harold Q. Masur though perhaps not quite to the same extent, loved particularly to tap the work of writers nearly as diverse in their output as he; Margaret St. Clair is represented by two stories, one for each of her common bylines; Fredric Brown, Miriam Allen deFord, Henry Slesar, Richard Matheson, Ray Bradbury, Gerald Kersh, and the relatively slick William Sambrot were all protean talents, as well. Lucille Fletcher's novella famously began life as a radio play. And Arthur's eye was sharp...Julian May is represented by her most famous story, even after some well-received novels later on, and the Jack Ritchie is one of his, if not the, best-renenbered. Arthur was particualrly keen on placing a Kersh story in his volumes, so I was aware of this superior talent, even as he was already fading from public consciousness in the '60s...Harlan Ellison's slightly later collection of his work was an attempt to bring Kersh greater attention. And Sayers, Peters and John Dickson Carr (as Carter Dickson) should dissuade no one from looking up this book...any more than Fischer, Gilbert or Benett should...

Little engaged me more than a new (to me) AHP volume in my youth...and they hold up well. 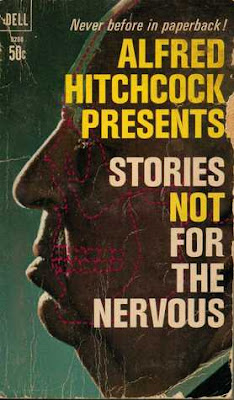 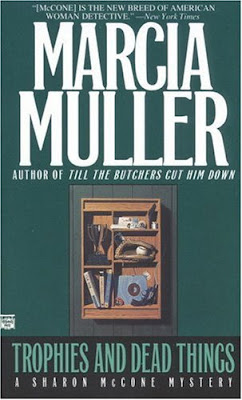 Also bright in my memory, but not yet dug out for review, is the first McCone novel by Marcia Muller I read, Trophies and Dead Things, which I had reason to mention on Patti Abbott's blog yesterday and which is getting to be twenty years old...and sadly, like too many Mysterious Press items, out of print. It was triggered, as a novel and as a rumination about life and society, by the near-simultaneous deaths of Huey Newton and Abbie Hoffman, and the signficace of both their lives and deaths. It was, and I suspect is, a superb read, and I hope to rediscover that and perhaps report back here sooner rather than later.

You can't go wrong with these old Hitch collections of which I have several. Look at that list of contributors! Incredible.

I read all the Hitchcock collections as a teenager.Great collections.Someone needs to do a collection of Slesar stories.

Or, at least, another collection of Slesar's work, or bring his older ones back into print (one of his was devoted to the stories adapted for ALFRED HITCHCOCK PRESENTS: the televisions series). I wouldn't mind seeing his Ruby Martinson stories all together, which I don't think they have been.

Hard to dispute, David. These anthologies helped shape my own eclectic tastes, as did Judith Merril's similar approach, as I've mentioned here (and elsewhere) before, and I'm sure I'm not alone in this.

George, I must admit the Dell practice of braking the hardcover anthos into two paperback volumes was a bit tiresome, even when, as in this case, the paperback cover was superior. And their confusion of the AHP: volumes with the ALFRED HITCHCOCK'S MYSTERY MAGAZINE best-ofs hasn't helped matters one bit, but both sets of books were highly entertaining (though I prefer the Arthur and Masur volumes, for their eclectiism as well as simply being somewhat better, story for story)...a confusion the latter-day "Dell" magazine group anthologies have done nothing to disperse. (Dell owned AHMM and several other fiction magazines for the better part of a decade, then sold them along with their word-puzzle and astrology magazines to crossword magazine specialist Penny Press, which kept the Dell Magazine group name alive.)

Or, even, breaking. The eyes, the fingers...

Never saw either so I'll have to take your word for it. Though I'm sure there's plenty of soul-sucking competition: that Jim Belushi show has been on the one channel I never watch for years and even the seconds of it I've seen while clicking past it assure me that it is utterly horrifying.

Yup. Utterly mediocre, or slightly worse, product. THREE'S COMPANY was insultingly dismal, and yet remembered with fondness by people with taste. It boggles. ARE YOU BEING SERVED?'s closest US equivalent (I hope the UK series it ripped off wasn't as dire.) PUNKY BREWSTER was dismal, too, if not quite sinking to the LAND OF THE LOST or SMALL WONDER (or THREE'S A CROWD or THE ROPERS) depths.

"Don't Look Behind You" is one of my favorite Fredric Brown stories. That looks like a solid Hitchcock collection. I have several but not this one.

Worth the buy, Cullen, if it isn't a camel's back buy on top of your other "forgotten"-book scouring...Arthur was also prone to reprinting short novels in his volumes of the adult series of AHP (as opposed to Arhtur's YA anthologies, such as ALFRED HITCHCOCK'S GHOSTLY GALLERY...).

I haven't read this Muller, I started with Edmund of the Iron Shoes, and read the next couple and then got distracted in other directions. Last year I took one of her books out of the library on impulse, much further along in the series, and enjoyed it, and vowed to one day go back and pick up where I initially left off and get caught up. Sadly, I have not yet done so, but it's a task to which I look forward.

Having read a few of the earlier ones, this is a series which for the most part gets richer as it goes along.