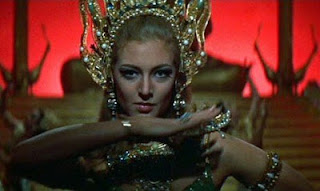 With Thanksgiving two days away in the U.S., as opposed to Canadian T-day, the temptation to baste some turkeys was resisted by most of the contributors (not all!) in today's roundup of insufficiently attended-to items (and in Jerry's case, one Entirely too attended). Thanks as always to our contributors and to you readers, and if I've missed your or someone else's review or citation, please let me know in comments. And may your holiday be festive...

Brian Busby: The Kidnapping of the President

George Kelley: Do The Movies Have a Future? by David Denby; Emily Owens, MD

Iba Dawson: I Love You Again

Juri Nummelin: KISS Meets the Phantom of the Park

Laura: The Falcon and the Co-Eds

Patti Abbott: A Day of Thanks on Walton's Mountain

Peter Rozovsky: Since Enter the Dragon...

Randy Johnson: Eyes in the Night

Scott Cupp: The Devil’s Bride (aka The Devil Rides Out)

Todd Mason: "You're No Good" (please see below)

A 1965 Canadian short film, both like and unlike Nobody Waved Good-Bye in some of its earnest awkwardness, yet much more indulgent in the emerging "mainstreaming" of surrealist technique in film, particularly angry young person film, of the mid 1960s. An early role for Michael Sarrazin, not looking 18 (he was in his mid-twenties) at a time when (I guess) Canada, like the States, still had legal majority beginning at age 21. Interesting, and actually almost good, and worth seeing once...particularly for students of this kind of film-making. It would make a good double-feature with The White Bus as well as with the other NFB production.
You're No Good by George Kaczender, National Film Board of Canada

Always liked Michael S. I wonder what happened to him. Will look him up.

Odd to think that he died at the not Too surprising age of 70 (for passing, that is) not too long ago. Just in case we needed another reminder that it ain't 1975 any longer.

Todd, thanks very much for the inclusion of my previous reviews. That's really nice of you. I'm giving finish touches to a short piece ON FARGO. Should have it ready inside of an hour.

Todd, if you're in the mood, here's a Canadian turkey, with American stuffing: The Kidnapping of the President.

The film post for today is up and running now, Todd. It's SEVEN DAYS IN MAY. Don't know where you got THE GHOSTBREAKERS from...that's an old post. But thanks.

I go looking, Yvette. Thanks, to all three of you.

Used to enjoy NFB films back in the day. They were so proudly noncommercial. This one also shows the influence of the New Wave from France.

Exactly, though so does NOBODY WAVED GOOD-BYE...albeit the latter in being the grandchild of Italian neo-realism, much as was the likes of THE 400 BLOWS or FORBIDDEN GAMES, while this one is almost as much the sibling of Richard Lester movies...though not trying to be too funny...

You didn't notice my entry on the Kiss film, Todd!

Sorry, Juri! An aversion to KISS might've contributed...will include it next week, as well.