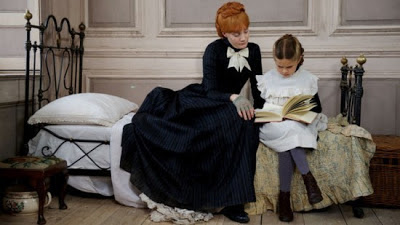 The Crimson Petal and the White makes for a fine, if grim, three and a half hour BBC television adaptation of  the novel by Michel Faber, with screenplay by Lucinda Coxon. Broadcast in the UK in 2011, it was imported by the cable channel group Encore for US audiences shortly thereafter (I saw it on Thanksgiving weekend on on-demand), and has a similar feel to the other recent import, Call the Midwife (visible in the US on PBS); instead of midwives and nuns coping with life in the post-WW2 slums of London, Crimson deals mostly with the experiences of late Victorian-era prostitutes and madams in and around those same slums, and particularly one bright and literate prostitute named Sugar, and their johns, notably a youngish (but no longer young), reluctant heir-apparent to ownership of his aging father's soap-perfuming and toiletries company, one William Rackham (played by Chris O'Dowd). 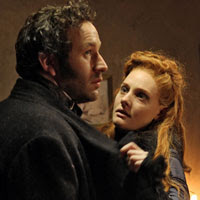 Rackham having hired Sugar for a night, becomes enamored of her and buys her way out of her mother's brothel, setting her up as his kept mistress. She, in turn, not only couples with him but starts to hesitantly fall for him, and helps him in taking on the responsibilities for the business, with the accounting as well as innovating the advertising and marketing of the products. Rackham seems a pampered but lost soul at first, a frustrated writer; Sugar is also a writer facing a different sort of frustration, taking out her anger at her clients and her lot in life by writing a long narrative of revenge, in which her analog-protagonist is an inversion of Jack the Ripper, serially murdering johns. As she grows fonder of Rachham, and the vast improvement of her own living conditions, she sets the narrative aside; but Rackham proves to be a weaker character even than he appeared at their first encounter, with a family he, childishly self-absorbed, ignores when he doesn't inadvertently torment. His wife, Agnes, is mentally ill (agoraphobic and acting out whenever forced into social circumstances), a circumstance which is not improved by her doctor's "care" (part of his "treatment" for her hysteria is to clinically, ritually rape her on a regular basis, to which she tearfully acquiesces without further protest); eventually, Sugar is installed in the main house as the new governess of the Rackhams' much-neglected daughter, and Sugar is able to improve the daughter's life considerably, while feeling ever more her "place" as both quasi-maternal and sexual servant...while also feeling increasingly alienated from her old friends back in the ghetto. 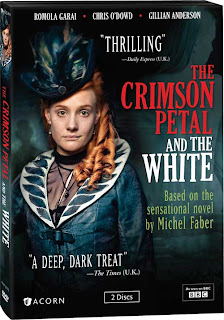 It's a bit of a post-Shaw Pygmalion story, with Sugar doing most of her own "self-improvement" in terms of emotional rather than intellectual growth--she was already a literary intellectual by the time she met Rackham, who was almost as enchanted by her artistic acumen as her sexual skills--and while this main plot and the several interactive subplots, usually about the romanticism, snobbery and self-delusion of the characters causing themselves and each other needless and usually unintentional  suffering, and the upper-class characters arrogantly sure of their assertions of what is right and proper, the lower-class characters too often assuming only what's basest in humanity is what's true.  Thus, the greatest problem with the series is that it doesn't present us with anything particularly new; you'll feel the resonances of the likes of Tipping the Velvet or Educating Rita, and every expose of the horrible conditions of Whitechapel before the turn of the century you've come across, even though their recapitulation is well-mounted here. Romola Garai, pushing thirty when the series was shot, is not convincingly nineteen, even given the aging effects her character's circumstances might take out of her; otherwise, she is as impressive as the rest of the cast, not least Richard E. Grant as the doctor, all well-meaning pompous grimness, manfully taking just enough sadistic pleasure in "helping" the ailing, tensely beautiful Mrs. Rackham (Amanda Hale), and impatiently concerned about his sister (Shirley Henderson), who contracts consumption (as tuberculosis was known then) through reformist outreach to the city's prostitutes...and who has her suspicions about the previous occupation of the Rackhams' new governess. An almost gaunt Gillian Anderson commits to her portrait of hard-hearted bitterness as Sugar's mother and pimp  (parents don't, on balance, come off well in this teleplay). Worth seeing, but not what you'd call cheerful, even given the slightly improbable and perhaps too vague ending.

The late-night programming block on the Cartoon Network cable channel, Adult Swim, has decided that Funny or Die (and such lower-profile players as Chill.com) shouldn't have all the shortform comedy video attention on the web, so has expanded their efforts, with the help of some of the staff of  The Onion, with the site pages Thing X...or perhaps that's all in the past tense, as the ads that brought Thing X to my attention during Adult Swim programming show the staff in various ugly degrees of having been murdered, and the site, which debuted in October, has a December 3rd farewell message on it. I suspect we are being put on, but we'll see how long you can see this embed, with Paul F. Tompkins answering some odd questions with reasonable wit and charm:


Speaking of ugly murder, Oliver Stone has been allowed to attempt historical documentary by Showtime cable, with Oliver Stone's Secret History of America, a ten-episode series that is about as useless, irresponsible and a waste of opportunity to do something good with an important subject as his dramatic films are. Relentless apologizing for Stalin's simultaneous brutality and ineptitude in conducting the business of his government, not least the Soviet theater of World War 2, is only the start of what's wrong with the bootless attempt at muckraking and re-evaluation on display here, with readings of documents and (often very questionable) hearsay "quotations" faked up by actors, but also subjected to sound effects to make them sound as if they are radio transcriptions or newsreel soundtracks, manage thus to go Ken Burns one farther in intellectual dishonesty...even when Stone is right, he manages to be wrong. However, if he can get over his Christopher Walken-esque cadences, he might, like Rod Serling, find a side career as a narrator, as his hammy affectation here doesn't completely obscure the quality of his speaking voice.

Brian Arnold: The Gift of Winter

Elizabeth Foxwell: "You'll Be the Death of Me" (The Alfred Hitchcock Hour) based on a story by Anthony Gilbert

Juri Nummelin: The Way of the Gun

Rick: The ABC Movie of the Week: Tribes; Duel; The Cat Creature

Stacia Jones: movies to watch for on cable in December; 3:10 to Yuma (both films); Who Bombed Judi Bari?

As frequently through the course of the day, there might well be additions to this list of links; if I've missed yours or someone else's please feel free to let me know in comments. And thanks to all the contributors and to you readers...
Posted by Todd Mason at 12/04/2012 02:15:00 PM

"The Crimson Petal and the White" sounds rather like a sordid tale though the perceived intensity of the characters should lift this television film sufficiently enough to merit a look, assuming it's in parts. I wonder if it aided Gillian Anderson's career. Thanks for the many links, Todd.

It would never have occurred to me to compare CRIMSON with CALL THE MIDWIFE - hat really got my synapses going, thanks Todd.

Both are about triumphing, however incompletely, over abject misery, Sergio...and essentially the same sort of misery, for the most part. How high-profile has each been over there?

You're welcome, Prashant, and thanks for your entry as well. Inasmuch as the miniseries, shown in two parts in the UK and four here (though by watching it on demand I could've watched it all in once sitting, and did watch the last 3/4 thus), was only released last year, I think any impact on Anderson's career would be limited, albeit she definitely pulls off the nearly-complete villain as well as anyone here, including Price's doctor. Sordid tale, indeed, but it's dealing with a lot of sordid realities of the time, alas. And not just that time.

And, tardily, thank your for your entry, too, Sergio! As I mentioned on your blog, the Criterion box of Dearden's films cries out to me.

I'm working on mine, now Todd. I will definitely have an entry later. Thanks for your patience.

Not at all. My CRIMSON review is a week late. Thanks, Yvette.

My review at MysteryFile on COOL MILLION got posted too late to make last weeks list. Could you add it to todays?

Actually, it was added to last week's but late, indeed. The more the merrier, as usual!

Okay, I'm up and running, Todd.