FFB: THE HARPER'S FORUM BOOK: WHAT ARE WE TALKING ABOUT? edited by Jack Hitt (Citadel 1991); THE PARIS REVIEW INTERVIEWS, Vol II, edited by Philip Gourevitch (Picador 2007)

Transcripts of a Bunch of Writers Talking. 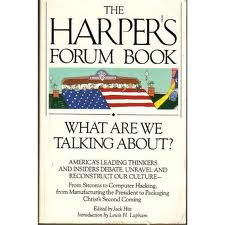 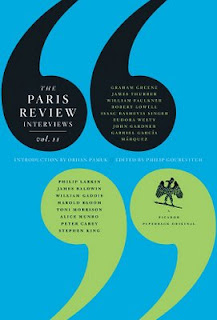 In 1984, Harper's, which had been fading as a magazine (into the shadows of its traditional rival The Atlantic Monthly and the comparative upstart The New Yorker, neither at their own height at that point), finally broke out of the cocoon that had formed around it. It retained its one most notable flavor from previous years--Lewis Lapham was back as editor, after Michael Kinsley had been installed for a long (dull) lunch, and again was a more felt presence than the other two magazines could boast (I read the Atlantic in those years and can't for the life of me remember the name of the editor; the precious William Shawn of TNY was entirely too obvious in hiding). The "new" Harper's was proud of its new regular features, including the Harper's Index (which was even syndicated to newspapers for a number of years), the excerpts and reprints in the front of the "book," umbrella-titled "Readings"...and a new feature, usually spearheaded by staffer Jack Hitt, in which a panel of (it was hoped) relevant and engaging folks were asked to chew over (at least) a reasonably interesting proposition...so, Robert Bloch, Suzy McKee Charnas, Gahan Wilson and Harlan Ellison were asked to collectively develop a sequel to Poe's "The Tell-Tale Heart"; Donald Westlake, Nancy Pickard, Peter Lovesey, Tony Hillerman and Sarah Caudwell were called upon to devise A Perfect Murder; advertising agencies and publicity teams were asked to devise campaigns for the Seven Deadly Sins, the return of Jesus of Nazareth, and the next US President; W. H. Auden's brief rhapsody about what his concept of heaven might be was offered as a model to representatives of various magazines (Readers' Digest's editor managed in one windy,self-congratulatory sentence to nominate his wife, unsurprisingly like RD itself far more smarmy than charming). Gregory Benford, Carl Sagan, William Burroughs, John Simon and a similarly amusing mix of others were asked to supplement the audio recording representing humanity and the Earth on the Voyager spacecraft...and thus a flaw in the strength of this project...while Hitt and his colleagues actually would seek out people who knew what they were talking about for these encounters--whether face to face in a restaurant or office, or virtual (via, in the '80s, a bulletin board system) or in typical magazine fashion, as with the Auden in heaven piece, gathering discrete mss. on a theme--sometimes the diversity was a bit lacking, unless forced to be otherwise...no women on the supplement to Voyager panel, for example, and the discussion titled "Only Mankind's Presence Can Save Nature" was rather too correctly notated by the exclusion of women from the discussion as well as the proposition. (No lack of ethnic diversity, if again no women, in the LA gang life discussion, not so surprisingly.) But that Hitt and company did reach out beyond Usual Suspects to bring in people who might have something intelligent and unpackaged to say about the topics at hand helped make this feature of the remade magazine's first decade a pretty continuous highlight.

The Paris Review, of course, was among the models for the Harper's redesign, visually as well as in content and approach...TPR had irregular but recurring features such as the "Como Conversazione"s and "The Man in the Back Has a Question" which were also fora for panel discussion (a form, I hasten to admit, not exactly invented by either magazine, but also one given more regular prominence by these two than most theoretically "intellectual" magazines)...unfortunately, the Review hasn't seen fit to collect or systematically offer those features on the web or in anthology form, so we settle for their most prominent nonfiction feature, appearing in every issue since the first, the long one-on-one interview, usually with a writer and a part of the series "The Art of Fiction" (though there are also corresponding series about poetry, nonfiction, visual art, etc.). I suspect there is essentially no one reading this for whom this is news, particularly since the Review is probably the only (essentially) US magazine over the last half-century to be so well-known for its interviews as to rival Playboy thus; even Interview or Rolling Stone aren't quite in the running. And while the interviews are now posted on the web, one can always wonder about the continued availability of them electronically (if both the magazine and the Internet Archive are persuaded to take them down eventually)...in any case, the volume cited here today begins with Graham Greene and ends with Stephen King, including James Thurber, Eudora Welty, William Faulkner, Gabriel Garcia Marquez, and Alice Munro between, and while these interviews sometimes fail to plumb the depths of their subjects, it's not for lack of trying. I simply wish that the Review would make more of their plural-participant transcripts available again one way or another...the crime-fiction-issue discussion of a decade back was particularly good.

And while on the topic of magazines: Doug Ellis's list of all the US pulp magazines and their publishers...not absolutely complete (almost an impossibility) but far more than a Good Start. This also useful for those hipsters who love to call paperbacks, men's sweat magazines and other non-pulps "pulp"...