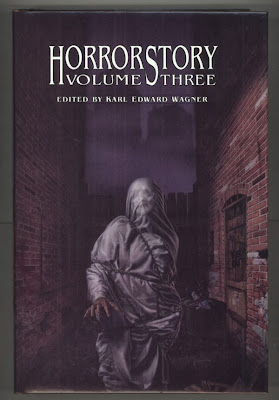 It would be difficult for me not to be at least slightly nostalgic about the contents of this volume, or of the three volumes of the paperback annual it collects in small-press hardcover format (big, galumphing small-press hardcover, with large pages and plenty of them).

Here's the contents swipe from the Locus online indices:

Gerald W. Page has edited a handful of anthologies, most in the 1970s, all impressive; one could've hoped he'd been able to do more. He was the first US-based editor for DAW Books's The Year's Best Horror Stories, after three volumes taken haphazardly from two distinct projects edited by Richard Davis for English publishers; Page assembled the fourth through the seventh volumes, and Wagner began with the 8th and continued till the 22nd, and the series ended with Wagner's death (the hole thus created in the market soon not so much filled as meliorated by the fine new annuals from Ellen Datlow and Terri Windling, and from Stephen Jones and Ramsey Campbell, with Campbell dropping out after the early volumes, and Datlow, much later, going solo with her annual collection...with Datlow and Jones eventually joined by Datlow's former assistant editor Paula Guran, first with a paranormal romance annual and then with one mixing a wider range of "dark" fantasy and horror).

Look at the contents of these three volumes, above, and imagine the collective effect on the young horror-fiction reader and aspiring writer/editor I then was...even when I didn't much like a story, as I didn't much like Stephen King's "The Night of the Tiger," the setting of this weak story between the brilliant "The Pitch" by Dennis Etchison and the solid "Amma" by Charles Saunders helps to give context, as well as an excuse to have King's name on the cover...at least this story was better than the Terry Carr and Arthur Saha fantasy annuals' snatching up such even worse stories as "The Cat from Hell" and "The Gunslinger" at about the same time (Page had a sharper eye, for the rather decent likes of "Children of the Corn" in the previous volume).  Meanwhile, one notes that Page, even more than Wagner, seems to be genuinely digging deep into the periodicals to find his contents, still a necessary thing as the small press in horror and related material was just beginning to burgeon, an efflorescence that Page (previously also the editor of the small newsstand magazine Witchcraft and Sorcery) and Wagner (as one of the most popular of writers for small-press magazines as well as an editor) did much to encourage. Page "cheats" thrice in his volume, in including first-publication stories by Manly Wade Wellman and  Darrell Schweitzer, something not too uncommon particularly in DAW "best of the year"s, and in snatching up the rather older than the previous year's fine "The Secret" by Jack Vance.  For his part, Wagner's first two volumes are similarly impressive, if all "stag" among the contributors...something that Wagner would address, though perhaps not quite sufficiently, as his annual went forward (KEW was intentionally more scrupulous about not publishing original fiction in his BOTY reprint annual). A few surprising contributors (if not That surprising...I just hadn't recalled where I first read Richard Moore's fiction) are added to the panoply of young and old masters in both editors' volumes...and both had the slightest sort of connection outside of my appreciation for their work here...Wagner was kind enough to praise my first short story (sadly, not long before his death), and Page (like myself only some years earlier) working at TV Guide (where, oddly enough, even if only in the Atlanta and neighboring regional editions, Page's writing was probably read by more people than all the YBHS contributors to his volumes could muster together in those years.

The Page book is also special to me in that it draws on 1978 magazine and anthology publications, the first year I was seriously collecting fiction magazines and all the related material they turned me onto, and I was thrilled to see fiction from issues I had read, and from those I'd missed so far...odd, to me, that Underwood and Miller should take, for their omnibus's cover, the weakest of the three DAW covers...this, btw, was Volume Three apparently because U/M hoped to produce hardcover reprints of the entire YBHS sequence, and the Davis and Page volumes would've populated Volumes 1 and 2, Later On...even as this "third" volume was produced after V. 4 and 5... 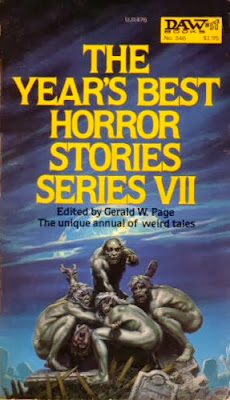 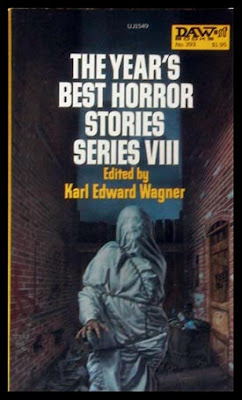 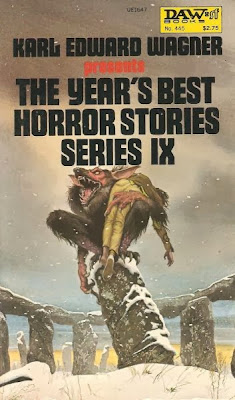 My ex was one of KEW's drinking buddies. I have a few anecdotes tucked away, but I can't vouch for their accuracy, as they're secondhand.

My reading in modern horror is actually very limited once you get beyond King as I seem to have stopped pretty much with the likes of Bloch - I love the sound of this omnibus volume Todd as a primer. Thanks for the detailed guided tour, much appreciated.

Kelly--Alas, Wagner was rather too ready to take in the recreational/pain-killing chemicals in his adult life...one of the few psychiatrist/horror and fantasy fiction writers who knew enough bikers to make an inclusion from EASYRIDERS magazine not so surprising in his first volume of the annual...and it cost him, and those of us who admired his work (much less those closer to him). I wouldn't be surprised that any details that were incorrect in the "telephone" version of what you remember might not be replaced with correct variants.

Sergio, gathering up the likes of the original DAW paperbacks (not too well distributed in the UK, but many US sources will ship reasonably) would make more sense at least financially than trying to get the HORRORSTORY volumes...and its the content you want, along with so many of the other volumes I've enjoyed touting, too often rather than seriously reviewing (where's the damned time going? Oh, that's right, Away)...certainly, you can do worse than looking to the current Jones, Datlow and Guran annuals and any anthology put together by the likes of Ramsey Campbell, Dennis Etchison, Stuart David Schiff, and a number of others...and, frankly, if you've read Robert Bloch and then Richard Matheson, you already have most of what's good about King under your belt. Ann van der Meer and her husband and some guy named Straub have been turning out some interesting bug-crushers of late, and the folks who publish CRIMEWAVE (new issue just out) over there in the UK are also responsible for the more frequent BLACK STATIC...it's a pity that Barbara Roden's ALL HALLOWS seems to have given up its last ghost, among the remaining little magazines of horror...and Kate Laity, among some others, is continuing to do some interesting-looking ebook anthologizing...