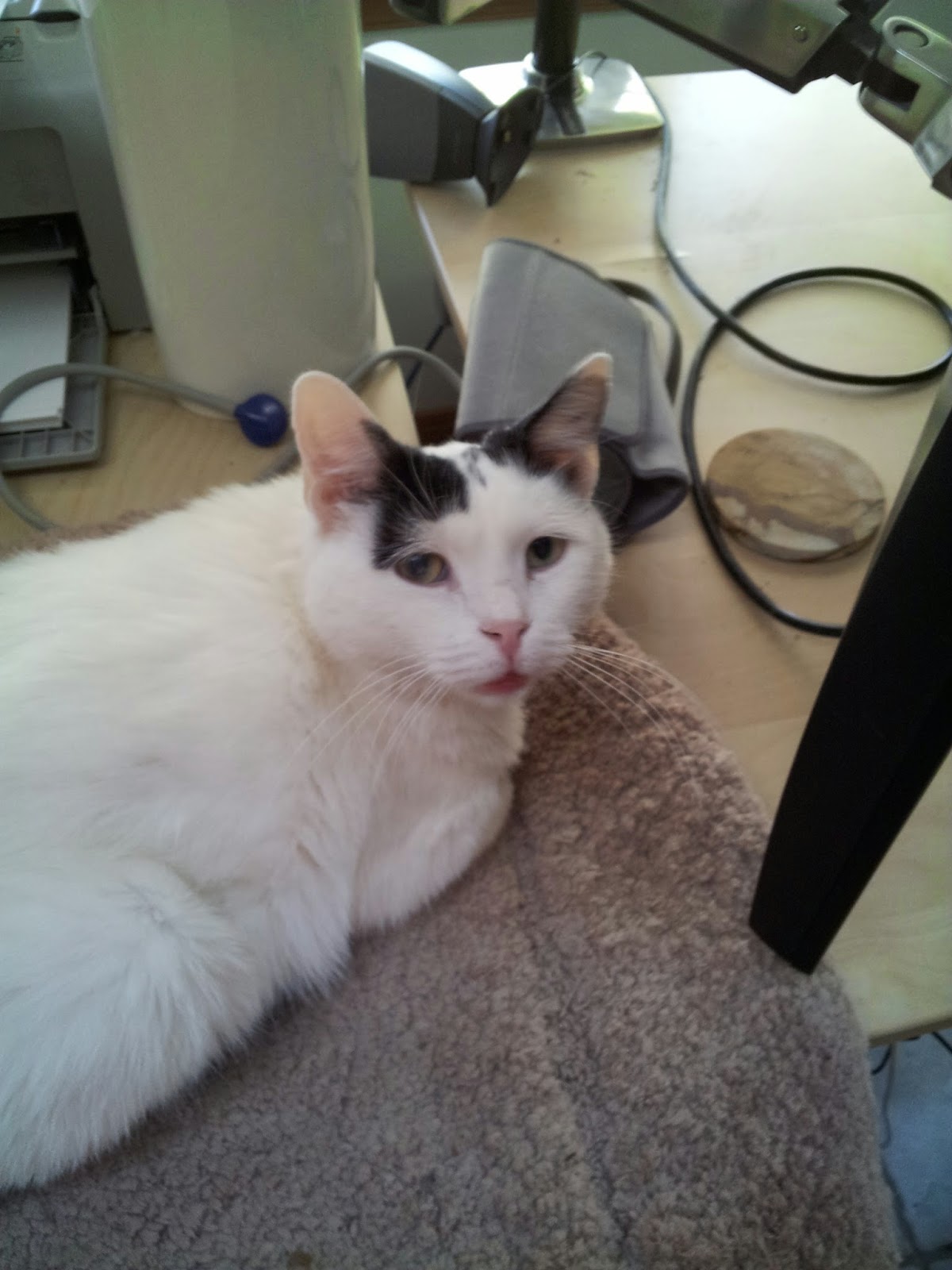 Reply to conversation [A]

Adopted in 2009 from the streets around the community health clinic where Alice, my best friend and housemate, worked, Emmy/Emma (depending on whether we speak of Emmy Noether or Emma Goldman as her namesake) had a wealth of health problems, though unlike her pair-bonded tomcat friend Otis, she didn't have feline AIDS, so they were separated (Otis, as Alice reminds me in comments, is still with his FIV+ household)...we already had Domino and Niki (aka Anna Nicole) and didn't want to risk their picking up the incurable disease...but as Emma got healthier, we discovered she had one lingering problem, with bad gums (which some cats suffer from congenitally)...but not until I found her hyperventilating under the backdoor deck stairs on Monday morning, and she eventually found herself in veterinary hospital, did we learn that she apparently had a congenitally enlarged heart, and was now losing a battle with the onset of congestive heart failure. Lasix and other drugs couldn't help enough before she threw a clot this morning. Alice already misses her computer buddy and videogaming companion terribly. We still have Domino, Niki and Ninja (formerly living with my parents--all four rescues in one way or another)...but I miss our ex-street cat, too.
Posted by Todd Mason at 6/26/2014 05:01:00 PM

My condolences. Some people would say, "It's only a cat," but I know better. We loved all of ours, and losing them was tougher every time it happened.

Thanks, Bill. Only the second one so far for whom I've had to handle the arrangements (I buried Naomi after she was hit by a car 25 years ago), mostly just backing up what Alice likes...my family did lose some cats by their wandering away in the days we kept free-range cats, and my parents eventually had to euthanize their previous duo, one of whom (Nemesis) lived to be 15, the other (Dakota) to 18. (Nemesis, named in part for a computer image of a neutron star that was her shade of gray,liked to pick fights with Naomi--the other reason she was Nemesis.)(Dakota was all-white, and originally was Dakota Snowball.)

I've lost a cat from leukemia and a dog from poisoning. I know what it's like. they're members of the family and the losing is hard.

So sad for you!

So sorry to hear this. It's a tough, tough thing, for sure.

Thanks Todd for the loving memories of Emmy. Her friend is Otis and I'm glad he's doing well despite being FIV+

Todd, I'm very sorry about your cat. My first pet was a cat when I was eight. He died of injuries after a vicious tom cat attacked him. I put the little fellow in a basket and buried him in the sea behind our home. Today, we have adopted a stray dog, a half Doberman, one of seven born near our home. We managed to find good homes for the other six.

It's strange how an animal can weave its way into your life and into your heart. That they are able to speaks volumes about the animals and about us. I am very sorry for your loss, Todd.

Thanks, folks (and so sorry for your first cat's experience, Prashant). Niki, the cat who seemed to like Emma the least is also the cat among the three who seems most aware of her absence...

I'm sorry to hear this Todd. My best to you and Alice.

Sorry to hear about Emma, Todd. I still think about my last dog that died decades ago.

So sorry, Todd. I know what it's like, believe me. So many dogs and cats have broken my heart over the years I hardly have any heart left. But that's the contract we make with them when we allow an animal into our lives. I'll take care of you and you'll eventually break my heart. That's the way of it.

Unless it's a tortoise or a parrot, of course.

Thanks, Yvette--of course, too often we break their hearts, too...we had four abandoned cats, after all...one from someone who didn't want a cat since she was having a baby, one from a pet supply store kennel, one from the streets and one from a pound by my parents and then from my parents' house when they hit their great troubles...meanwhile, they bring us a great amount of companionship and can be fascinating in so many ways (not least in proving how wrong those people are who think non-humans are interchangeable...I suspect such people make the same mistake with other people, too...).

So sorry for your loss, Todd. Losing a cat is really heartbreaking for me, I know when I get one that I'm entering into a relationship that will hurt at the end, but I do it anyway, and smother them with love and give them the best life I can and then, when the time comes, honor them in memory.

It hurts, I feel for you. I have tears in my eyes. Most sincere condolences.

Thanks, Rick...it's parenting-lite (as I've been given to understand by various parents), only with the vastly greater certainty that you will outlive your charges. Unless you go in for tortoises and the longest-lived birds, as Yvette notes.

Very sorry to hear about your cat's passing, Todd. :(

Thanks, Jeff. Hope things are going much better for you and yours now...