The Parts Left Out: THE REALIST and the Larger Culture 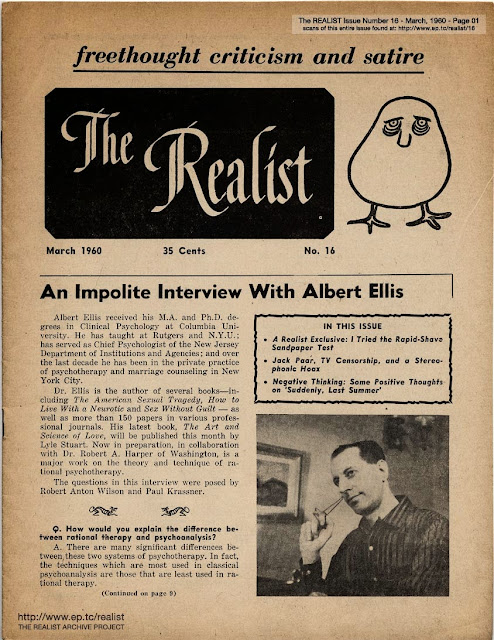 The beginnings of an entry in Earl Kemp and Luis Ortiz's Cult Magazines that I didn't have the wherewithal to put in the form I'd be comfortable with.
Of course, The Realist Archive, which would've helped enormously, really filled out several months after my deadline...

The Parts Left Out: The Realist and the Larger Culture
By Todd Mason
It seems strange in retrospect. The Realist, the magazine which is often cited as having sparked the Counterculture of the 1960s, founded in 1958 and folding in its first inpulpation in 1974, is now often best remembered as the magazine that published the Disney Orgy. Not even “The Parts Left Out of the Kennedy Book,” which suggests that LBJ had his way with the recently dead JFK’s corpse, seems to loom quite as large in the collective memory…maybe because of the famous litigiousness of the Disney empire, maybe because so many youngsters saw the various iconic characters engaging in fairly public intercourse at an impressionable age…maybe because Paul Krassner, the founder, editor and publisher of The Realist, will still sell you a poster of the Wally Wood cartoon.
But what was genuinely impressive about The Realist was less about one or another example of the fun that could be had putting an absurd spin on the larger horrors of the day, so much as the audacity of the whole, the willingness to once more throw itself into the breach, to use irony, with absurdity and genuine anger, to do what journalism so often credits itself with doing, to comfort the afflicted, and afflict the comfortable.
Krassner, by the accounts you can find in his autobiographical writings collected variously and in interviews all over the web, was a bright kid ready for attention; famously the youngest violin prodigy to perform at Carnegie Hall by 1939, he has never lost his taste for public performance. Inspired by the (in 2006, recently late) publisher Lyle Stuart, whose “alternative” newspaper The Independent was an early and formative gig for young man, already working as a comedian (as with Jack Benny, Victor Borge or the Smothers Brothers, using his musical abilities to augment his comedy act), as was a brief tenure on Mad magazine, just after [must doublecheck] its transition to a full-sized magazine from the more distributor-controlled standard comic-book format. Not completely satisfied with the limits of Stuart’s paper’s muckraking nor the not-completely juvenile (but always juvenile-accessible) lampooning of Mad, he reports that he thought he’d best combine the strengths of both, and produce a topical satire magazine for adults. Thus, The Realist.

1958…it’d been years since the mimeographed near-samisdat of the likes of G. Legman’s Neurotica had reached its few subscribers, Harvey Kurtzman’s Trump and Humbug had already slipped away from the scene (and his Help! wouldn’t arrive, with its own kid-friendly limits, for another couple of years, nor the national version of Monocle--not the current magazine of that name), and the closest thing to a truly engaged adult humor magazine widely available in the US was the gray, genteel New Yorker (and in Britain, Punch was not much edgier). Meanwhile, the much-vaunted (and –damned) “Beats” and the “Sick” Comedians, and a few others clustered around the likes of the tabloid The Village Voice or the increasingly surefooted attempts to achieve a kind of wry sophistication on the part of magazines ranging from Esquire through Playboy to the upstart Evergreen Review, seemed to suggest that the Cold War terror of appearing non-comformist was either slackening or at least had bred a reaction, or a counter-reaction, to the notion that Fulton J. Sheen and the Reader’s Digest had all the answers you couldn’t find in an approved civics textbook. A newsletter-format magazine that corralled and expanded upon the absurdity and willingness to address taboo subjects that was characterizing the best college humor magazines, and was more willing to focus on the absurdities of public discourse and official doubletalk, and would take a semi-serious, at least, look at “fringe” culture and ideas…this is what The Realist provided from the beginning. And would continue to provide throughout its run, inspiring offshoots and partial descendents ranging from the National Lampoon through the initially hippy-oriented underground newspapers to such deadpan hoaxes (with their parody grounded by the reality they mirrored) as the Report from Iron Mountain, like the typical Realist hoax article too believable an insanity, for its times, to be dismissed as merely a joke…when the hoax was apparent at all.

[This would be where the bulk of fleshing out with specific examples from Realist articles and interviews would appear, highlighting the diversity of the fringe, countercultural, and early-warning journalism and satire offered by the magazine.]

By the time Krassner wrapped up The Realist for the second time, seeing that there were (with the internet, the web, and other emerging decentralizing technologies) other means to spread the good word and carry on the good fight, he was particularly happy about such developments as The Onion, a paper devoted entirely to pointed hoaxes, and such projects as Harry Shearer’s weekly radio satire review Le Show. He began blogging, an utterly natural outgrowth of his previous journalism. And he maintains. The job is never done, but The Realist, perhaps more than any other single magazine, helped define how it could be done.

Thanks for this Todd - needless to say I now have all kinds of terrible Disney images in my head, but I forgive you (and let's hope the Mouse House thought police is napping)

Thanks, Sergio...though as frequently I should've looked more closely at this old draft...typo city...soon remedied.

Great stuff. Reading the Realist in the early 60s was a staggering experience for many high schoolers (me) and their friends. At the time, it was merely outrageous; now I look back and see it as heralding a decade that transformed America in so many ways, most of them positive. I was glad to be there and go along for part of the ride.

NatLamp tried to be the same sort of thing for our generation, as did SPY, later...i'd say THE ONION has come closer, and even SCTV in its compass. But I certainly was happy to read and subsribe to the second series of THE REALIST in the '80s...