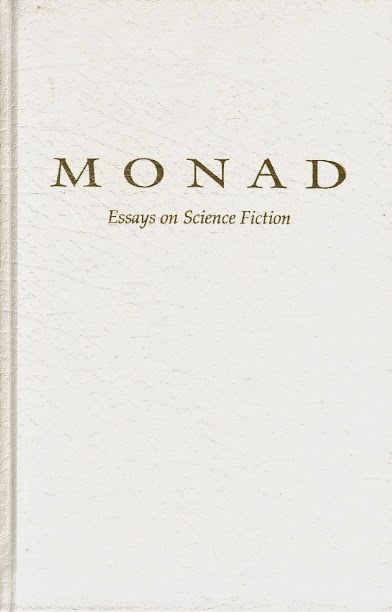 As noted here previously,  Damon Knight's Monad, as a periodical book (subscriptions available) was sadly short-lived, producing only three issues/volumes before the overextended publisher gave up the ghost (unlike Algis Budrys, who bought his magazine Tomorrow Speculative Fiction and published it himself after the first and only Pulphouse issue, Knight perhaps decided he didn't need to gamble his own cash). Knight's editorial here notes that the first two issues break nearly every rule he set out for himself in the first editorial, and indeed the subtitle is no more true for this issue than for the previous, as the essays collected here are nearly as much about fantasy fiction and literary criticism as about sf per se.

The quality of the essays is about as good as in the first issue, as well, with William Wu's account of being perceived as not writing Sufficiently Orientally about East Asian and particularly East Asian-American matters a wry tale, Wu trying his damnedest to be both fair and kind but his head clearly still shaking No as he types, with utmost justification.

Brian Aldiss, in a piece first delivered at an IAFA convention, makes some interesting observations about how home-bound, and comfortable in being so, the majority of British fantasy before the latter 1970s had been (British characters even often living rather cheerfully with their household haunts), vs. the quest tendency prevalent in US fantasy...even Arthur eventually settled, though Aldiss takes more interest in another poem usually attributed to the anonymous composer of "Sir Gawain and the Green Knight."

Gary Westfahl's first essay is the weakest in the volume, making valid points about various sorts of and reasons for sequelization, but tying that to a rather tiresomely distended running joke of creating or repurposing terms for these various methods and devices; the butterfly is definitely broken by time the wheel stops turning.

John Barnes replies to Bruce Sterling's essay in the first volume, taking Sterling to task for his rather facile dismissal of modern critical theory, without ignoring the flaws and limits of the array of critical approaches he cites.

Thomas Perry looks closely at Robert Heinlein's first published sf story, "Lifeline," and among other things cites Alexei Panshin for his misconstruction of the story in the latter's critical writing on Heinlein (Perry is too kind, however, to Cory and Alexei Panshin's The World Beyond the Hill, their attempt at a critical history of sf that won an extremely undeserved Hugo not long before this issue was published). Perry's joke about the death of a journalist character in the story is particularly fine. (Perry apparently didn't know, or perhaps didn't remember, that the Thrilling Wonder Stories story contest Heinlein didn't choose to send his story to was subsequently won by first sf-story author Alfred Bester.)

John Sladek briefly and wittily (of course) limns some of the inspiration for and subtext of his novels Roderick and Tik-Tok, and robot narratives generally.  BBC Radio 4 and possibly NPR and Pacifica Radio listeners' loss is our gain here.

Westfahl is in much better form with his second essay, which is a good brief survey, by an academic critic of sf, of how and why much of the academic criticism of sf goes awry, or misses its own point (sometimes by intent and out of practical necessity), and how some for which this is true is still better work than The World Beyond the Hill, which he deftly outlines as pitiful with plenty of supporting evidence, despite, as he notes, having within it at least an interesting and useful consideration of the influence and underappreciated qualities of A. E. van Vogt's early sf...and this in a critical magazine edited by Knight, who first gained widespread attention in the speculative-fiction community, in the late 1940s, for his critiques of van Vogt's widely-hailed early work not long after the latter was first published. Westfahl is also judicious about the strengths and weaknesses of critical works of peers ranging from Darko Suvin through Paul A. Carter (one of the first I read, when his The Creation of Tomorrow, and I, were new) to Norman Spinrad (whose critical work in the last decade or so has been underappreciated and usually rather better than his more recent, and sparse, fiction).

J.R. Dunn's letter rather forcefully, if at excessive length, takes issue with an assertion of Ursula K. Le Guin's in her essay in the first issue, and there's some justice and some useful reference in the churn of his argument.

One could wish for more Knight in this issue beyond the editorial, but one could certainly wish the magabook had had a longer run.  I still need to pick up the third and final issue.

For more of today's books, please see Evan Lewis's blog (and his Hammett-tribute story in the current Alfred Hitchcock's Mystery Magazine), as he fills in for Patti Abbott (with her own new story in the new magazine Betty Fedora) this week.
Posted by Todd Mason at 3/27/2015 12:53:00 AM

That sounds so refreshingly wider-anging - probably why it failed in the marketplace, so but completely my cup of java - thanks Todd, never even knew this (briefly) existed

Sounds intriguing! Damon Knight was a brilliant guy. I wish he wrote more. But his work as an editor is legendary.

Sergio--it didn't quite get the push that some of Pulphouse's projects did...but it's difficult for any small magazine to thrive if it isn't as much a matter of love as commerce. Certainly, those cited in the review of MONAD #1 didn't make their editor/publishers rich.

Fiction-writer, critic, writing teacher and editor (and SFWA organizer and first President), and even a decent illustrator, heavily influenced by Hannes Bok...George, most of the short fiction he wrote, and the last novels, are a legacy anyone would be proud of...we could use more, but he gave us a Lot.

You know, it took until the other day for me to note (or rediscover) that not only is MONAD a pretty interesting name for such a magazine, but also it's "Damon" reversed...