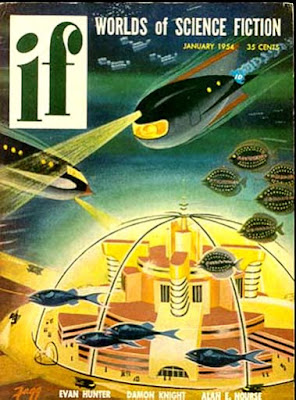 The January 1954 issue of If (on newsstands in early December '53) features an impressive lineup of writers...each, save one, would go on to or had already established a sustained career in sf and fantasy; the one was Evan Hunter, who hadn't yet legally changed his name, and had in fact published a number of sf stories under a version of his birth name, S. A. Lombino, which he'd shed over resentment of anti-Italian sentiment in the US (one each in the sf magazines had gone out as by Hunt Collins, Ted Taine and D. A. Addams, according to ISFDB). This story was the seventh in the sf magazines to use his preferred pseudonym/identity for his best work. It's still his most famous sf story, albeit kept out of print for long stretches by the existence of the novel expansion Tomorrow and Tomorrow (first published in 1956 under that title in a Pyramid paperback, and also as Tomorrow's World in a typically cheap Avalon hardcover, both as by Hunt Collins; Sphere did a UK paperback under the T&T title, as by Ed McBain, 1969).

Below, the contents of that issue of If; the best and most important story in the issue is the Damon Knight story, "Anachron." Larry Shaw, like Knight a former Futurian, was the editor of the magazine, but could be overruled by the publisher James Quinn, who retained the editorial title for himself (with Shaw officially as associate ed.).

The Internet Archive posting of the January 1954 issue of If is here.

I am happy to be able to report that, unlike every other Hunter/McBain/Curt Cannon/etc. story I can recall reading, there is no fatal stupidity or overstated striving for effect (the major flaw I recall in Last Summer the novel) that tosses verisimilitude out the window in "Malice," so much as a playful and slightly half-assed application of the slang/argot and the effects of their narcotized lives on the wealthy bohemians of the story's future. In a sense, Hunter's disdain for working out the details in his fiction is reflected in the attitudes of the Vikes, who go in for vicarious thrills in extremely lurid novels, videos and 3D presentations, as well as keeping themselves hopped up on (usually) mixtures of cocaine and heroin, and some newer synthetic drugs of unspecified effects. The opponents of the Vikes are the Rather Square "Rees," whose lives are less virtual and less recreationally medicated, and who often prefer at least somewhat realistic middlebrow fiction and the like. It's a bit of a culture war, of a kind all too familiar in the early 1950s in the US even as it is today, with Hunter enjoying, in a manner rather derivative of Alfred Bester particularly and the Galaxy sort of "comic inferno" satirical writing generally, playing off the various fresh and recently-enough historical dichotomies...entertainment Industry staffers (including those in publishing) vs. the sensation-seeking public, whether Vike or Ree and the would-be watchdogs of public morality (analogous to Wertham through McCarthy) among the Rees; bohemians (including the emerging Beats) vs. the boojies; perhaps even a hint of Weimar Republic tension.  Vike characters particularly will drop in and out of standard 1953 American English, occasionally larding their sentences with such words as  "illidge" rather than "bastard", "grooved" for "understood"; a tendency to refer to each other as "mother" and "father" the way the more avant garde in the African American community then might call each other Brother and Sister. (Hunter might also be engaging in the slightest bit of self-parody, as the protagonist long ago traded his original Slavic name for a relatively Aryan one, and is sensitive about it.) Vikes are also notable for wearing as little above the waist as possible, aside from various means of casting different colors and micro decorations on women's breasts and men's (sometimes artificially) hairy chests and everyone's bellies. As with heroin junkies Hunter was aware of in his time, the Vikes have lost interest in sex per se, often have gone as far as finding it revolting, but appreciation of nudity, and even a certain level of bluenose reaction to complete nudity in formal settings, remains with them. 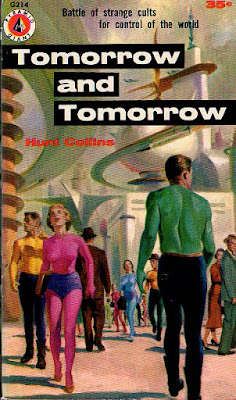 This story, when come upon by readers unfamiliar with the context in which it was published, might dazzle them with the somewhat lazy if smooth way Hunter drops in his Vike argot and descriptions of new technology, already common coin in sf of the time that will go unread by those who will instead decide Hunter or, say, Vonnegut made all this stuff up by themselves, in the manner of those not terribly well-versed fans who are certain that Miles Davis was a unique genius who singlehandedly remade jazz in various ways throughout his career, as opposed to a collaborator with a wide variety of other serious artists and often more of a popularizer than innovator. The subcultures have their own languages and developments that are traded off and built upon, no matter what school or schools of art we speak of; and there will be those ready to lead with their chins, like a young (mid-20s) film-review blogger who noted recently that, for a Remade Films blogathon she's setting up, she doesn't want any comparison of films based on Famous Books such as Little Women or The Maltese Falcon, but those based on obscure books and stories such as The Big Sleep, Double Indemnity, "The Most Dangerous Game." "The Secret Life of Walter Mitty" and the like are just fine for her purposes. As I noted that the films of The Fly are based on a hugely famous short story, she rather sniffily hoped to shut me down with the assertion that only true fans of that kind of story would ever have heard of George Langelaan's unknown prose; she certainly had never heard of any such story. Or, apparently, of Chandler's The Big Sleep. I have refrained until now from suggesting that her ignorance isn't my responsibility (nor, certainly, her arrogance about her ignorance), and I'm quite sure that she'll never read this (or those source stories)  unless it and they are thrust upon her, though whoever does so might be doing her at least some small favor. As mentioned above, Hunter is mostly having fun here, and perhaps tweaking particularly the culture around the Scott Meredith Literary Agency and Hollywood sorts he was beginning his career with at about this time...there are entirely too many worse Hunter stories one can turn to instead, and I wonder if the novel is nearly as pleasant as the short form. 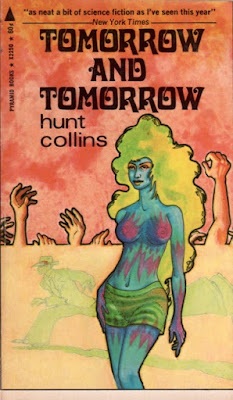 The 1970 Pyramid cover at left is probably the least misleading representation in illustration of the tenor of the story, aside from Kelly Freas's original magazine illustration (where Freas himself is the model for the protagonist). The notion that the Vikes and Rees are "strange cults" might be introduced in the novel, but are hardly the case in the short form.

For a lot more praise for Hunter than I'll ever put forth, I suspect, please see the other reviews at Patti Abbott's blog. (Well, I do agree with Hunter's preference for Hammett over Chandler, that obscurity, though perhaps not  to the degree to which Chandler drove Hunter up a wall; the editorial project, an original novellas bugcrusher, that Hunter at least put his name to and probably did some work on, was pretty decent even if it did have a Jeffery Deaver story.)
Posted by Todd Mason at 10/02/2015 08:35:00 AM

I read of lot of Evan Hunter when I was a kid. In the Seventies, I was a huge Ed McBain fan. Later, I found it Evan Hunter and Ed McBain were the same guy.

As a kid, I wondered if anti-Italian prejudice was really still so strong in the 1950s...but it was only a decade after the Axis powers, and unlike Salvatore Lombino or even my mother, my Italian heritage was hidden behind an utterly WASP name...early hostility my mother faced in the '40s might've had something to do with the naming choices my parents made.

An impressive line up of writers indeed. IF was a favorite of mine and it was one of the best looking SF digests before becoming the companion to GALAXY. I still remember sitting at my desk at work in 1974 and being shocked at the announcement that IF was going to cease publication.

Great post Todd - never read any of the SF he published. I may just stick with the 87th in fact ...

I'm with Sergio here on that. SF never has caught on with me despite being almost overexcited by Fred Hoyle's The Black Cloud. I could name (without running out of fingers) the SF books I've read after that, but now that I've rediscovered Hunter/McBain, thanks to Patti, I'm inclined to try a little of his if only for early examples of his craft.

Well, as I note above, for me, at least it's a step above the McBains and Hunters I otherwise recall reading, and way the hell above Curt Cannon...so the short form, at least, is not the worst place to start.

Matthew, it's funny you should mention Hoyle...I've been startled how many people have been reading Andy Weir's THE MARTIAN and giving me the equivalent of a confused stare when I point out what a straightforward science fiction "problem story" it is...certainly that's what Weir intended to write. "Why is this sf?" I hear...I tend to reply, what the hell do you think sf is that you want to extract a story of a stranded astronaut and his future-technological survival story from science fiction? It's the locked-room mystery equivalent in sf...one of the bedrock forms of the literature.

Well, Walker, at least GALAXY absorbed IF, and James Baen was the last editor at either magazine to be able to assemble a pro-level magazine, as the publishers kept robbing GALAXY, to pay...someone

I am not a lover of sicience fiction but when a good one comes along the genre can not be beat. I was drawn to this post today shortly after seeing the Ridley Scott/Matt Damon film The Martian (Yes, I know this is not a movie website but it was adapted from a book) and you need to see it. The combination of science, rea l humanity, and humor make for a great film. Go sse it now! I know I'm off topic here, sorry!

Not terribly off-topic, Charlie. The most remarkable thing to me about Andy Weir's novel, which the film is based on, is the degree to which the publishers were trying to distance the book from science fiction, when it's an almost simon-pure example of sf...and how many often-sensible readers have bought into that, as if there was a lack of fiction in sf dealing with technology, real humanity and, frequently, humor...I'll grant you, such work is still harder to find in sf film.