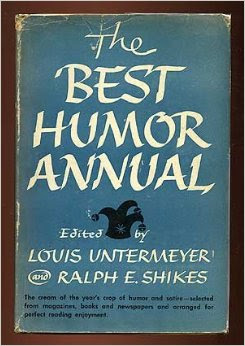 Louis Untermeyer and Ralph Shikes were among the more public intellectuals in the U.S. at the turn of the 1950s, particularly the former, who was a founding panelist on the television series What's My Line? (starting in 1950). They shared a love of humorous writing and art generally, and published in 1950 the first of what would eventually be a three-volume series of Best Humor annuals, the first Best Humor 1949/50 and the next two The Best Humor Annual (without years tagged on the cover, they were published, unsurprisingly, in 1951 and '52). By 1952, Untermeyer's life was beginning to unravel in a big way, as a victim of Red-baiting of the era...he had apparently written too much for The New Masses in the 1930s  (as he had for the more broadly socialist/radical The Masses earlier), before moving on to found his own magazine The Seven Lively Arts, and later signed a few too many petitions circulated by Leninist fronts and/or Leninist-supported groups for the liking of J. Edgar Hoover's FBI and 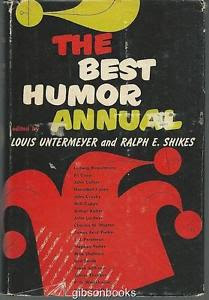 the House Un-American Activities Committee and similar agencies. He was hounded off the series and tv generally by March, 1951...leading to depression and agoraphobia, but the editors still managed to get the third volume of the annual out; probably as a consequence of the "scandal" of his sympathies, the 1952 volume was the last to be published. In 1953, both men went onto new, similar projects, Untermeyer editing a single issue of The Book of Wit and Humor for Mercury Press, which had recently sold The American Mercury to another publisher (where it, as edited by William Bradford Huie, became even more the post-war voice of the Conservative Movement in the US), but continued to publish Ellery Queen's Mystery Magazine, The Magazine of Fantasy and Science Fiction, and a few other titles, including the Mercury Mystery line of novels in digest-sized format...that periodical series, and the similar Bestseller Mystery, would become full-fledged magazines after the sale of EQMM in the late 1950s.  Shikes kept his hand in with the first volume of Cartoon Annual, for Ace Books; subsequent second and third volumes were eventually published as edited by "Brant House" (a hardy Ace house pseudonym, even house brand, possibly employed in this case by Donald A. Wollheim). While both men would go on to notable further publication, and Untermeyer at least one more humor anthology, these were a little burst of industry in this field that apparently was both pioneering and cut short by blacklisting as much as anything else.

From the first volume, the Holt annual was meant to be a big-tent affair, featuring a wide range of approaches from satire to mildly amusing upbeat stories that were a bit more elaborate than the collections of anecdotes and jokes Bennett Cerf, Untermeyer's essential successor on What's My Line?, was prone to assemble (often without crediting his sources). Most of the most famous humorists of the period were represented in the three volumes, even if the number of cartoons in those volumes was rather restricted; Kirkus Reviews noted about the 1950 entry, "In full and in part, here are poetry, articles, fiction, cartoons, whose authorship ranges from Cleveland Amory, Robert Benchley, Bob Considine, Wolcott Gibbs, the Gilbreths, Langston Hughes, John Lardner, David McCord, Ruth McKenney, Ogden Nash, [S. J.] Perelman, [Robert] Ruark, on to Louis Zara and Maurics Zolotow. " Only the editors didn't slight women contributors quite as much as Virginia Kirkus or her staff did here, and such up and comers as Ray Bradbury are also included.  The conceit of arranging the contributions alphabetically by author was abandoned after the first book. With the discontinuation of the Holt annual, and Untermeyer's passage through his period of (understandably mildly paranoid) depression, Lawrence Spivak at Mercury Press, already the moderator of  NBC-TV's Meet the Press at this point, presumably felt safe enough to release the one issue of the prospective magazine The Book of Wit and Humor, which while less time-bound than the previous annual was similar in content and diversity, featuring many short bits and unlike the other Mercury Press magazines essentially no original material in the issue aside from editorial introductions and the weak exception of a joke column or two. Meanwhile, perhaps sundered in the face of anti-Untermeyer Activities (and his houseboundedness), Shikes moved onto the first annual multi-source collection of cartoons I'm aware of, drawn from the same sort of magazine and newspaper sources (Saturday Evening Post to The New Yorker to the New York Herald-Tribune) they had tapped for the Holt annual; perhaps the notoriously low royalty rates at Ace dissuaded Shikes from continuing, even though Ace did...one doubts that Ace was his first choice of publisher. 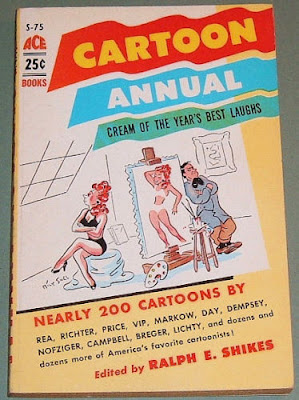 Indices for these titles to come...the 1949/50 volume just arrived yesterday, and I haven't had the opportunity to get to a scanner for a cover image; the blue volume is the 1951 volume, the red and black the 1952.

For more of today's books, please see Patti Abbott's blog. I believe I'll be collecting the links next week, as Patti takes the family holidays seriously. 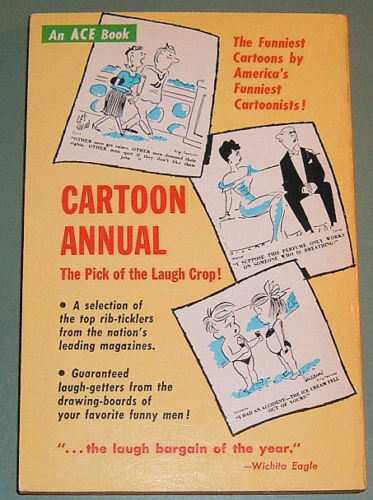 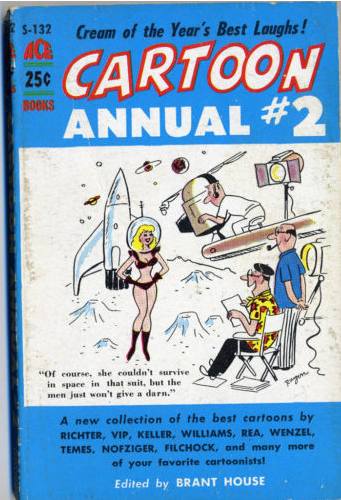 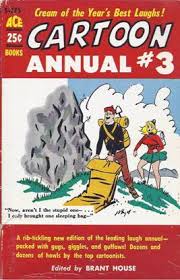 Bhob Stewart put me onto the magazine issue, and in picking that up I became aware of the other publications. Galactic Central already had the Mercury item cited, but I think it will be up to me to provide the contents for the FMI and the Miscellaneous Anthologies index.

Thanks, Richard...I mean to pick up your magazine soon.

Didn't know about Untermyer's troubles with the McCarthyites. His name brings back pangs of academic angst, as he edited or co-edited several textbooks I had in college and maybe even high school classes. Didn't know of his TV contributions, either. For some reason the staid, even stodgy, impression his name left (sorry) with me--until now is hard to reconcile with humor. Thanks for the education.

Well, he isn't as adept with a quip on the series as Fred Allen would be, oddly enough (as one can see on YouTube), but he has his points. Shikes was a more confirmed Henry Wallace Progressive sort of fellow at the time, but as a less visible target didn't face the pressure from sponsors and street protestors...

"By 1952, Untermeyer's life was beginning to unravel in a big way, as a victim of Red-baiting of the era"

In terms of pop culture, there's so much to like about the 1950s, that it makes me wish I could live back then...until I'm reminded of the extent that period of time was permeated by one form of repression or another. Racism, sexism, homophobia, and , of course, Red baiting. Looked up Untermeyer's name online and see he died in 1977, by which time the McCarthy era had been thoroughly discredited. Hope he got some satisfaction out of that in his final years.

Well, 1951-52 was probably the worst of it for him...his poetry anthologies and the like were, as Matt notes, being used in classrooms in the '60s and '70s...the fruits of the 1950s prosperity being so unequally enjoyed did allow for some impressive liberation movements to gain momentum again...and the forces of reaction to re-gther as well. We certainly can see the results of both now, for good and ill.

I remember my grad school American lit professor back in the mid-80s somewhat disparagingly referring to Untermyer as "the great anthologizer of everything."

I would say that the humor anthologies, including the magazine issue, are solid rather than superb. But others have done worse.

Todd, I have seen the Cartoon Annuals too, though I can't say where. My dad had some humour books and I developed my love for this genre from him and his own wit. I have not come across the Humour Annuals.

Off to visit with family for Christmas and New Years, Todd. Will be gone for a few weeks. So in the meantime, I hope you and your family will have a very Happy Holiday!

Well, Prashant, I think it would be very unlikely you'd see the HUMOR volumes, given how obscure they've become in the US, and how few were probably exported...I'm surprised if you've seen even the Ace CARTOON ANNUALs, given their age, aside from seeing them online, but so many copies of 1950s US paperbacks were printed of nearly every title that casual encounters even Over There are rather more likely than with a Henry Holt hardcover volume. .and certainly there are other cartoon anthologies that look similar.

Thanks, Yvette, and I hope the same for you! My minor troubles keep piling up...a molar broke last night, and so my morning was largely spent in a dentist's chair...yet another delay, along with the cats asking for attention, in getting to Overlooked AV...

I'll probly miss this Friday, too, Todd. Didn't realize Christmas was looming so near, and I've some crap yet to do. Sorry about the tooth.

Thanks...the reverberations of that and the hard-to-shake cold continue to sap my energies, as well as the thin wallet. And it's time to feed the cats!

Hope you have a great Christmas and new year chum.

I had no idea about any of this. What a fascinating chapter of U.S. publishing history...although very sad to read about Untermeyer vs. McCarthyism. Incredible to think that his career (along with many others) would be ruined despite the profession of free speech. It's a sobering thought.

Yup. There are never any settled questions, or at least not any completely settled. As the Spanish-language folks note, La lucha continua. But at least Untermeyer wasn't permanently derailed...though I suspect he would've preferred not to be knocked off track at all.

Belated Buon Natale and HNY to you, too, Sergio!