FFB: COLLECTED FANTASIES by Avram Davidson (edited and with an introduction by John Silbersack) Berkley Books 1982 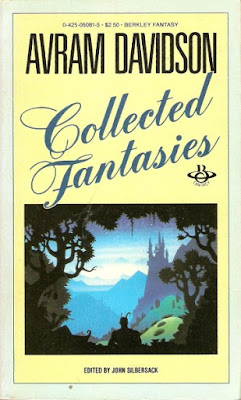 This is a funny book, in at least two senses. Following as it did a small spate of Davidson collections and reprints of collections in the late '70s and early '80s, including the improbably brief The Best of Avram Davidson (as selected by Michael Kurland, foreworded by Peter Beagle), this Silbersack collection seeks to gather what the editor refers to as some of Davidson's trickiest stories, rather than a selection of what we usually mean by "fantasies"...and even as such, it's not a complete success, but as an introduction to Davidson's work, or supplement to the casual reader of Davidson, it's clever and eccentric enough to be both a good start and a useful survey of some of his range. Nowadays, the only reason one might hand this book to the new or casual reader rather than The Avram Davidson Treasury, or the more specialized collections Grania Davis and company have released since, is the utter compactness of this eclectic display of the (typical for Davidson) intelligence and wit applied in all the stories within, some of which mark high points for his work in various modes.

It's not a (titling) success in that not all these stories are fantasies, though all are arguably fantasia; perhaps the book is an example of early deceptive marketing in this wise, in hoping to rope in post-Tolkien boom fantasy readers into a wide-ranging selection of Davidson's work (after a number of years where publishers would willfully misidentify some fantasy as science fiction). Also, as a selection in a commercial sense for the confirmed Davidson reader, it offered a slightly odd duplication of three stories from the 1981 collection Strange Seas and Shores, released less than a year beforehand (including the major story "The Sources of the Nile"). Nonetheless, "The Lord of Central Park" (from Ellery Queen's Mystery Magazine) is almost absurdist enough to qualify for the book's stated remit, but still remains brilliantly within the boundaries of something which might've happened, could have been happening at the time of composition; "Dragon Skin Drum" (first in The Kenyon Review) is a means to allow for a late 1940s discussion of the state of China between two Chinese men, one a eunuch retainer of the last Imperial Court and the other an enthusiastic if somewhat bet-hedging supporter of the essentially fascist Kuomintang, at the time of the story losing ground to the Communist revolutionaries, and two US Marines, one a Christian fundamentalist and earnest seeker of the soul of China, the other a rather more pragmatic, if also rude and bibulous, slightly dissipated not quite old  China hand, more interested in how the end of his tour will result.

The book's also not a success as a representative sample of Davidson's work in that some of the most rococo fantasies are left out (no Dr. Eszterhazy story, for example, nor "Hark! Was That the Squeal of an Angry Thoat?"), as are most of the other more realistic while baroque examples of his fiction, though "Dragon Skin Drum" has much of the density of his best work in this mode, and the more distantly historical non-fantasy "The Man Who Saw the Elephant" (from Yankee magazine), an example of the graceful, lighter touch he could employ (and also indicative of his interest in accurately representing life in various subcultures, in this case the "Quaker" Friends of New England in the mid 1800s). The grim, straightforward science fiction of "The Certificate" (while at least as much Kafkaesque as Orwellian) is in the mode of "Now Let Us Sleep" but far less well-remembered. While such all but inarguable classics of science fantasy as "The Golem" and "Or All the Seas with Oysters" are definitely among his most antic stories, the first a very high grade of sitcom dealing in part with a variety of homunculus creation stories, the latter a brilliant extrapolation as to how aliens might be disguising themselves as living versions of quotidian, easily-lost tools such as coat-hangers; "Help! I am Dr. Morris Goldpepper!" is another of his best and most straightforward farcical sf stories, one which tends to stick with readers, even those who find Davidson's more complex work less to their taste.

There isn't a story here that doesn't reward reading or rereading, from the leisurely build of "Manatee Gal...", the second-published Jack Limekiller story, set in the British Hidalgo that stands in for the actual Belize, formerly British Honduras (as Denny Lien notes in comments with perhaps excessive asperity), where Davidson, Davis and their son Ethan once lived, to the brief and deftly frantic "Sacheverell" with its poignant last line. One could pick up an inexpensive copy of this for the feel of these stories so grouped, and Silbersack's introduction, and use it as a loaner or a gift for those who still need to know Davidson's work; or simply as a means to dip back in at odd moments. And "The Certificate" hasn't been recollected in a Davidson volume since, though it's alone in this.


from the Homeville Index:

I'll take the AD Treasury instead, thanks.

No need to deprive one's self! That "The Lord of Central Park" is absent from that collection is a major deficit...in an otherwise splendid selection.

Well, I've got the treasury so I think I'll have to get this one now - great article, thanks Todd.

Go ahead and pick up all the Grania Davis-edited posthumous collections (usually in collaboration), and this one as well...even if only for the reasons I suggest in the last paragraph for having this one, too...

I have a couple Grania Davis collections on my shelves. I always liked Avram Davidson's work but he was an acquired taste.

I'll disagree with that last, George, only to the extent that I loved his work as soon as I was aware of it. But allusive wit and the intoxication with both the language and with employing/juxtaposing as much erudition as one finds useful to do is my meat...I like, say, Thomas Pynchon and Saul Bellow best frequently when they are, in their way, rather like Davidson at his best.

I'll be reviewing some Davis soonish, I hope.

You figure out more concretely what's been knocking over your blog yet?

Never heard of Avram Davidson until now. Todd, your analysis of his fantasy collection and his other works give me a good idea what to expect were I to read any of his fantasy and sf stories. He seems to have been a prolific writer.

Prolific, but not to the extent that some of his peers have been...and he wrote nearly as much crime fiction as fantastic, and a fair if lesser amount of historical and contemporary mimetic fiction, as well as metafictional essays (not restricted to his ADVENTURES IN UNHISTORY, though they are the most famous).

My default choice for my favorite writer. You'll see him widely cited on my blog here, as I gather you might've already discovered.

Surely "British Hidalgo" was a stand-in for British Hondorus (now Belize, since 1973), which is where the Davidsons lived for a time -- and not for Guyana (different history, different language, different country, different continent)?

I think you're correct about Belize...but not about the language difference between Guyana and Belize, both old Brit colonies in what's otherwise mostly Latin America. So, thanks, Denny.

As a quibble, Guyana has three official languages (English being one of them), while English is the only official language of Belize. But that is indeed a quibble, and I'll admit that in fact I was confusing Guyana with French Guiana, so points to you on that one, leaving us in a dead heat. Best two out of three? (Swords, pistols, or footnotes?) / Denny Lien

No, no, it's been a bad day for me, and remembering which nation the Davidsons decamped to after Mexico was a bit muzzy in my memory, though the one Pretty Nearby Mexico should've been my first suspicion even if I didn't Go Look It Up. Odd, also, that the Dutch tradition in Guyana was officially extirpated...though it Has been a couple centuries since...the Indian subcontinent diaspora has placed notable numbers of Hindi and Urdu speakers in the Commonwealth nation, it seems

Since your taking on the links for the week, here's mine.