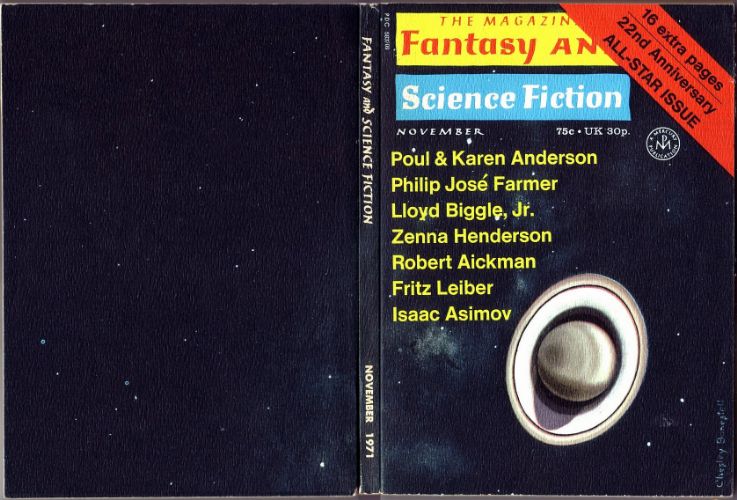 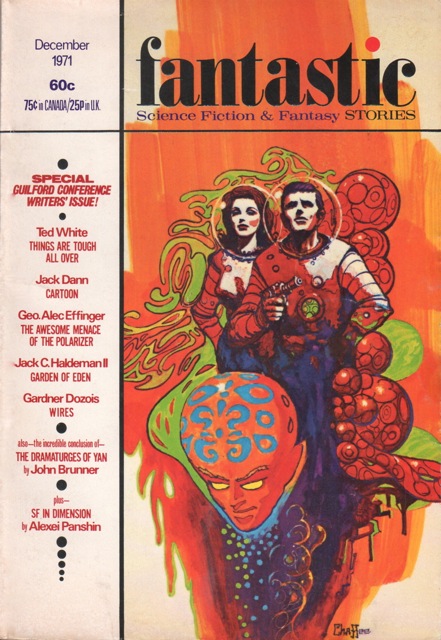 The Magazines:
The first issue of F&SF I read, five years and some months after it was published (in latest 1977 or earliest 1978), and the Fantastic that came out at the same time (a bimonthly v. monthly for the slightly older magazine), which I've never gotten around to reading till now. Let's see if nostalgia has much of an effect, or the lack of same leads to less sentimental grade inflation...

And two special issues...the anniversary issue for F&SF, which has usually been careful to note its anniversaries (and often offer All-Star specials to soften the blow of price rises--this the first 75c issue), and the first issue from a (happily short-term) new printer, apparently the same one printing the similarly ugly and gray-ink issues of former stablemate Ellery Queen's Mystery Magazine of this period. Their previous printer suddenly inflated prices by some Large chunk at the last minute, and apparently Joseph and Edward Ferman, father and son and publisher and editor, expected a less distressing product with the new discount printers; presumably the EQMM folks at Davis Publications recommended their contractors as capable of doing the job in a pinch. As it happens, F&SF dumped the printers of this and the next several issues in favor of the printers used by Fantastic and Amazing, after Ted White put them in touch with each other.  Hence, both magazines in the early '70s and throughout the decade, like many paperbacks from the same era, had stiff/heavy stock, full-color cigaret ads bound into the middle of the issues...presumably, this bit of business helped defray printing costs. The Fantastic is also a special issue, albeit apparently one of lowest-selling of the magazine in that period, featuring as it did several up and coming writers who were participants in the DC-area "Guilford Writers Workshop"...which took its name in honor of, and jest regarding, the well-established Milford Writers retreat Damon Knight and Kate Wilhelm would host annually in those years. Despite all of them going on to have at least sustained careers, none of the Guilford writers were names to conjure with in 1971, except among those Deeply into fantastic fiction. White himself was the first and most widely-published among the group including George Alec Effinger, Gardner Dozois, Jack Dann and Jack Haldeman (elder brother of Joe Haldeman).

The Contents: the stories, visual art and nonfiction features:
I find it interesting that despite both contributing a fair amount of covers to various fantastic-fiction publications, both magazine issues and books, both Chesley Bonestell and Douglas Chaffee would gain their greatest renown and daily bread in related fields...Bonestell in astronomical art for nonfictional publication, Chaffee in game-related art (though early in his career, Chaffee worked for IBM, and US government agencies; both artists were engaged by NASA). Not that there were enough fiction magazines in this era to support any artist by themselves, even if Stephen Fabian and Vincent Di Fate were coming closest to doing so in the 1970s. Good, even if not the best, examples of both men's work.

Not to be too superficial about it, but LOVE that cover from Fantastic!

I was somewhat underwhelmed when I read that issue of FANTASTIC, although the Brunner serial made up for much of the other issue. Ted White's FANTASTIC was my favorite magazine at the time and, while I appreciated what he was trying to with that issue, it just didn't work well with me.

The F&SF was one of my first encounters with Aickman, who was one of the truly great horror writers of his time. Combined with the Leiber, this made for a strong issue. Farmer, Biggle, and Henderson all had typically good stories. I have to admit I don't remember the Jennings story at all.

I really look forward to your FFB magazine hook-ups, Todd.

Thanks, Jerry! Now to actually get the story reviews in phosphor. The Jennings stuck with me about as powerfully as the Leiber, maybe a bit more than than the Aickman...it might be the best story I've read from him, nightmarish. Yeah, the workshop stories aren't really the best early work by the writers in question, I'd say as well.

Sergio, excellent color and detail, but not my favorite FANTASTIC cover by Chaffee, much less among all his work. But his more "realistic" work for other magazines does seem less inspired. I like his cover for the 1972 December issue better, with a similar approach and motifs...

See a gallery of his covers at http://www.isfdb.org/cgi-bin/ea.cgi?26145 though you have to click through to each for a large image...

I actually read those two issues back in 1971. SUNY at Buffalo has the FANTASTIC but I think I lost the F&SF in one of my many moves back in the Seventies. Great memories of that time!

It is remarkable how nearly illegible the printing (and binding) job on the F&SF issue is. The copy I'm reading now has even worse trimming and binding than the one I first read, which is in storage....and has been missing its back cover since I first saw it.

That issue of Fantastic used some darn good interior artists, particularly Jones and Kaluta. Not bad in the fiction selections either.

Nope, the writers have certainly established themselves, as I note, even if Dozois has become, like White or Terry Carr or Judith Merril, that much more famous as an editor. White's lifelong interest in comics brought "over" even more illustratiors than were already working for the likes of GALAXY.

And I look forward to reading the Long (31 pages) reprint from Don Wilcox, whom we were discussing on George Kelley's post today.

It boggles me thinking how long it must take you to put all those links in your post. (I, too, like the Fantastic cover)

The FFB and Overlooked A/V (and Monthly Music) index posts do take a chunk of time, but the links in this post are lifted en masse from ISFDB...since they are links to ISFDB itself, I've not been redundifying that, but probably should.

I wonder how much Mike Hinge influenced him, if at all.

I also have both issues in my collection. You've provided me with a lot of information. Think I'll dig them out and take another look. THANKS.