Underappreciated Music: July 2016; the links to the reviews, samples and more (new material)

Sergio Angelini: The Count Basie Orchestra with Jackie Wilson: "Even When You Cry"
Love this protest song by Quincy Jones and Alan & Marilyn Bergman written I think for the tv series Ironside. It was used twice, including a very moving rendition by James Farentino in the episode "Something for Nothing" Can't find that, so here is Count Basie and Jackie Wilson instead (not a bad trade): 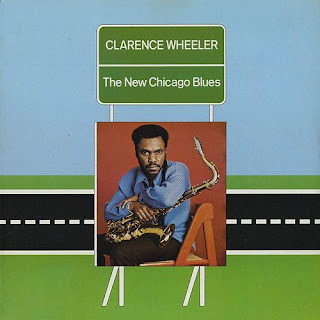 Jerry House: Connie Francis; Hymn Time; Music from the Past

Kate Laity: Songs for a Saturday 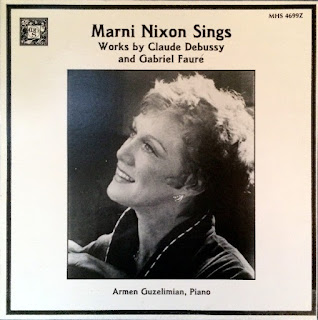 Early memories:
I posed the question on FaceBook: What was the first song you remember engaging with...the one you found yourself singing as a child? (Or later, if your interest in music came later in life?) I suspect mine might've been "Happy Together" by the Turtles, though as an infant I was apparently a Monkees fan, as I would watch the series with my sitter. (I was born in 1964, and the Pre-Fab Four appeared on the scene in 1966.)

Geoffrey Hughes My guess would be something by the Beatles. I can't recall but it seems like a safe guess.  I remember really liking Rock 'n' Roll by John Lennon as a young kid. Though these 2 Christmas Albums: A Chipmunk Christmas  and John Denver and the Muppets: A Christmas Together, are still at my Mom's in the record collection.  I'll take 'em out on Christmas Day if I can.

Kate Laity Probably a tv theme song...Quite possibly 'Branded'; I remember singing that while we played at my grandparents' house. Most of my early songs were my folks' 45s so the Jimmie Rodgers double side 'Honeycomb'/'Kisses Sweeter than Wine' is likely. I have no sense of timing for my childhood (very Zen for much of it) but we always had music on, all day. It was weird to go to other people's houses and wonder why they didn't have music on. We had [a] college FM station which was pretty good.


David Pringle "How Much is That Doggie in the Window?" [Along with Patti Page's international hit record,] There was also a British cover version by Lita Roza (a Liverpudlian-Spanish singer now pretty much forgotten) which reached number one in the UK charts. I probably heard both.

Sergio Angelini Probably the theme from The Banana Splits (sigh).  (Kate Laity responds: The Dickies' version is one of my favourite all time songs.)

David Pringle I was blessedly free of TV theme songs, because we didn't have a TV set in our house until I was seven-and-a-half. However, I first saw some TV at my grandmother's house in the preceding year, 1956. This, then, was the theme song of the day [for the 1950s The Adventures of Robin Hood series] which went through one's little head constantly (it was sung by Dick James).

Natalie Pesin My uncle and aunt made me a tree swing in the front lawn of their house and I would scream [the Beach Boys'] "Help Me Rhonda" at the top of my lungs while I was swinging. It was in the downtown portion of a real small town in Upstate NY and the neighbors would sometimes sing along when they passed by.

Stephen Maurer My sister tells me I sang a mean rendition of [Guns 'n' Roses's] "Paradise City" when I was very small, but the first song I remember loving is [The Who's] "Baba O'Riley."

Reed Andrus I go a long way back, remember my mother singing Nat King Cole's "Nature Boy" to me. Also Patti Page, "The Tennessee Waltz" (I think). [I noted my parents had apparently sung the Gershwins' "Summertime" to me as a lullaby when I was an infant, and I'd always liked the song; Reed stated he did, as well.]  Without checking, I think Bill Haley's "Rock Around the Clock" came out with The Blackboard Jungle. That might have been my first pop music memory. [Assured that it was on the soundtrack, and that the film was released a year later than he recalled, in 1955:] Okay. Means my life started turning to the Dark Side at age 9. I thought it was earlier, but oh, well...

Keiko Hassler notes via email that for her, it was Neil Diamond's "Sweet Caroline"...

Patti Nase Abbott "The Night They Invented Champagne": It's from the soundtrack of Gigi, which was the first album I played on my new record player when I was nine or ten.

...and if you have any suggestions for good music for the under-5yo set, Natalie and her infant son might well enjoy hearing of them...


Meanwhile, here's something else from me, from FB:

Brian Arnold shares the news of BandCamp now selling downloads of the Dischord Records back catalog...a friend of his had posted a link to Emily Manning's i-D bulletin, more than a little breathless: "Back in 2013, Washington, D.C.'s Corcoran Gallery of Art opened an exhibition titled 'Pump Me Up: D.C. Subculture of the 1980s' — an archeological goldmine of relics from the capital city's long-lost outlaw days. The show's most unbelievable treasures were unearthed from what's perhaps D.C.'s most important subculture ever: its vibrant hardcore punk scene, championed by seminal label Dischord Records (founded by Minor Threat members Jeff Nelson and Ian MacKaye)." 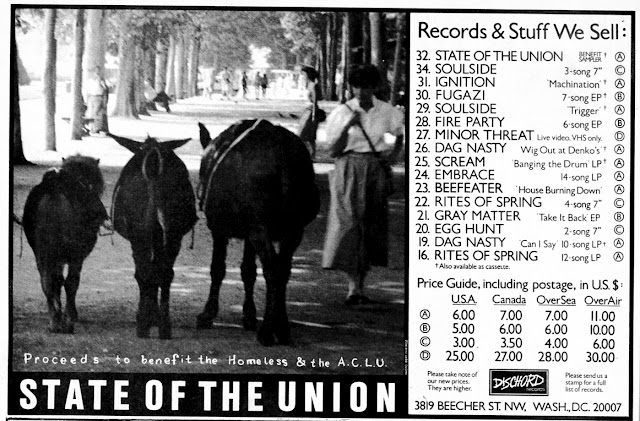 But this is a very good way, aside from buying physical copies of the recordings from Dischord itself, still very much an option, to throw a few more richly deserved bucks at the ex-members of such bands as Trusty and Smart Went Crazy. Then there are those folks who were acquaintances and even very close acquaintances of mine...I'd been a prot0-punk fan in the early '70s, and had been exposed to a lot of turn of the '80s punk by my friend  Keiko; my ex Donna Wilson reinforced my casual love of the music by, with me in tow, becoming as much as possible a harDCore supporter and eventually a bit of a mover and shaker in that scene...and, if anything, I might've been even more in tune, so to speak, with what the Dischord bands
were striving for than she was (the tendency to try to make very melodic if still visceral punk, or to interact with such other DC musical expressions as go-go--which has as much if not a little more claim to Most Important Local Musical Subculture, as might bluegrass--was more than cool but she liked straightforward energetic hardcore punk even more). Donna and I first met Dave Allen of Branch Manager when he was something like assistant manager of the Cineplex Odeon theater where we tried to catch the first film version of Isaac Asimov's "Nightfall," until the film, which looks like it was filmed on the last standing sets of The Last Temptation of Christ before they were struck and can boast of a cast uniformly coated in oil, made Donna physically ill, and I could sympathize, though my reaction was more in anger than of nausea; we took passes rather than demanding a refund. Dave and I would later work together for a couple of years; I ended up taking his (managerial/light accounting) job after he moved on to a promotion at another Borders. Cynthia Connolly and I practiced our email Japanese on each other. I became one of the loudest and most consistent fans of Jawbox in the local "alternate" press; they were kind enough to have Donna and me over to their house for an interview for the radio show (pre-blog) Sweet Freedom (I also went to Pam Bricker and Gareth Branwyn's house to record an interview, as this was one of Branwyn's less physically robust periods; Douglas Winter and Ted White were better able to come to the radio studio, and Len Bracken brought the visiting Bob Black along). Donna got deeply involved with Positive Force DC; I helped out with a few of their projects, so was adjacent while Riot Grrl DC was flourishing...while Mark Hand, Eric Mason, Nancz Ryan and we put out a zine, or several, but one in collaboration, and Donna, for much of the early years, cohosted radio "Sweet Freedom"...Donna's hardcore (and other punk rock) segments of the show often got the most vociferous fan response. In true Creem magazine fashion (in the Dave Marsh years), I always felt punk had a kinship with free jazz, and twelve-tone and later classical music...and, of course, by extension, my greatest musical love, third stream music. And I'd run many spoken word recordings, including eventually being the local presenter of The Progressive magazine's Second Opinion and RadioNation (from The Nation magazine) in the shifts at Fairfax, VA and Philadelphia stations. I also wrote up Positive Force DC for The Progressive, which apparently inspired a rather longer article from a member of Girls vs. Boys in The Nation.


I didn't have the wit, the one time I was around Kenny Inouye, to ask if he knew/ remembered my old friend Laura Nakatsuka from the days when her father had been press secretary to the Other Hawaiian US Senator till 1977 (and only Republican Senator so far), Hiram Fong. (Kenny is the late Sen. Daniel's son.)(His band Marginal Man was breaking up about the time I was being seriously introduced to the DC punk scene...though my first attendance at the old 9:30 Club had been in 1984, to see the Bangles, and the Intentions opened for them.)


Though both Bob and Ted were among the in-studio interviewees on the show, things were rarely so Black and White...secure in the knowledge, and with no dread, also that Winter was coming...

Thanks for the inclusion matey! Amazing crop - it goes on for ever and ever (but in a good way) :)

Thanks for the dual contribution! This a bit more autobiographical than most posts here...while affording opportunity for snapshots of others' autobiographies.