I'm unboxing my books from storage, in a haphazard way, which is already inspiring further queries from Alice as to why we need all these books. My query in riposte, as to why we need all the gaming consoles we have, admittedly a smaller but still importunate and wire-tailed clutter, is not appreciated. I haven't begun to populate all the shelves we have (some of Alice's books that were doused slightly by the tomcat before his Prozac prescription--the gift that keeps on giving when new boxed pockets are discovered, some total losses since discarded--still need some cleaning before they can be shelved), so some of the old friends I have seen in decades are coming back to light, such as my old John D. MacDonald paperbacks, or Marvin Kaye anthologies, early (in their careers) paperbacks by Neal Barrett, Jr. and Kathe Koja and Mark S. Geston, Muriel Spark novels and Ron Goulart pop-culture histories, the Lancer/Magnum and Signet Classic editions I read in the summer of 1976 of the Tom/Huck/Jim stories by Twain, and Trollope novels and Adrienne Rich and volumes of The Year's Best Horror Stories and philosophical and historical studies and The Jack Stories, which come from the same well Manly Wade Wellman drew from. Why do I need all these, anyway? The Lansdale novels and comics and Twisted Sisters (not the band with the singular version of that name, but the feminist comics anthology magazine) and the oversized 1970s DC reprints of 1940s comics...among my treasured, not actually barnacles. All of these out of the last box I opened last night. (A while back, one of the first I opened had my copy of Westeryear, an Ed Gorman anthology I'm reading for FFB, having discussed it with James Reasoner briefly not long ago.) 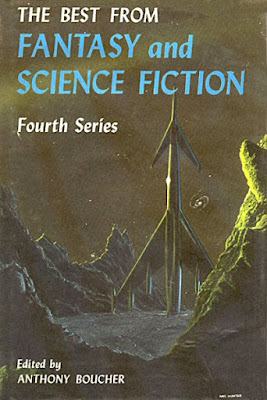 Two more of those recent rediscoveries are this week's items. The anthology was the first best-of their magazine that Anthony Boucher edited on his own, his co-founder at The Magazine of Fantasy and Science Fiction, J. Francis "Mick" McComas, having stepped down in 1954 after five years of co-editing the magazines as it was published, and as conspirator for several years of its birthing process at Mercury Press (and as Boucher's co-editor of the short-lived true-crime magazine Mercury also published). Stories from the last issues, published in 1953 and '54, they worked together, and a mix of items which have lived on notably and some which have become obscure in the interim (or are simply thought of as minor work by major writers in a few cases): 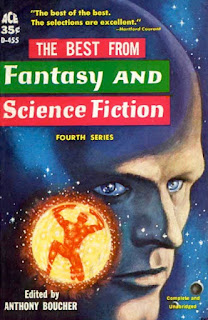 What we have here: perhaps the single most famous short fiction by Alfred Bester, a technical tour-de-force, leads off, and Avram Davidson's brilliant, offhandedly fantastical debut in the secular press (all his previous stories y had appeared in [at least culturally] Jewish magazines), certainly one of the more recognizable Bradburys (it's the one that was reprinted as the first story in my 7th grade Scott, Foresman reading textbook), the first of only two stories that McComas would place originally with his former magazine. And stories from Shirley Jackson (her first for the magazine), Lord Dunsany (a reprint from the British magazine Lilliput), and one of Manly Wade Wellman's stories about John, the Balladeer, one of the if not the best of the story-series begun in the magazine. And stories by Kornbluth, Anderson, Sheckley, Arthur Porges (one of his more clever and widely-reprinted vignettes), Daniel Galouye, and F&SF discovery Richard Matheson. More poetry than usual in these volumes, as well, even given it's all light verse, including by Boucher himself under his third pseudonym, like his second, H. H. Holmes, lifted from the Devil in the White City himself, the man who probably wasn't born Herman W. Mudgett.  Two academics with relatively sparse but not inconsequential careers in speculative fiction, Irving "Bud" Foote (his only published short story in SF, though he would contribute nonfictionally) and Robert Abernathy, whose career as a fiction writer was mostly confined to his relative youth, and who was one of several notable contributors to both Planet Stories and Astounding Science Fiction (often cited as the two extremes in sf field at the time) in his first decade, in the 1940s; F&SF published most of his later, 1950s stories. The Anderson is bent a little too far out of shape in attempting to be a story that accounts for all the aspects of the chess match it's based on;  Matheson's might be the closest to a tired story among these, and it's readable enough. 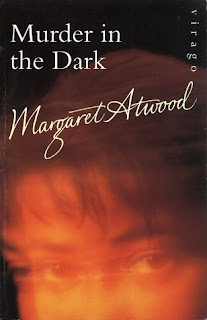 Murder in the Dark begins, rather as does Stuart Dybek's Brass Knuckles, as a set of reminiscences of youth, in Margaret Atwood's case of reading an uncle's old Boy's Own Annuals (and speculating on a missing volume's installment of a  serialized story) or reading horror comics and chatting with a school friend on the way home each afternoon, and how a too-accurate snowball to the back of a random adult brought home the realization that horror really isn't simply the Vault of Horror one tucks or gives away after reading. Other vignettes in the slim volume are short stories, others yet musings on various subjects, not least men in both literature or other art (and how they compare with women thus, and how both are dealt with) and in life (and thus there, too). Some amount to musings with are also stories, sometimes in the second person...Dybek never gets to be quite as metafictional as Atwood often is, though Atwood is about as funny, and reaches not unsuccessfully in the Borges direction in most of these short works. As such, it's a pretty good introduction to her writing, for those who might find her long novels a bit intimidating (though more people seem to prefer longer novels these years); her excursions into pulpy adventure-flavored  meta-narratives is also revealed to have roots in her young reading...which also prepared her for the science fiction and related work she has frequently published throughout her career, while also having some mixed emotions about that field and her relation to it...alternately celebrating and dismissing it, perhaps too sweepingly in both modes, and for reasons that can no longer be considered sensible seemingly still reflexively afraid of losing some of her audience, much as Kurt Vonnegut used to be...while perhaps also annoyed by her encounters with sf people en masse, as opposed to various individuals.  So, as we've been told, it goes. This is, again, mostly a charming book, not too slight, if not exactly Lady Oracle. The game Murder in the Dark is something I'd not encountered before this book...a relatively low-effort detection party game...but avoid, as she notes indirectly, playing it with mad poets. 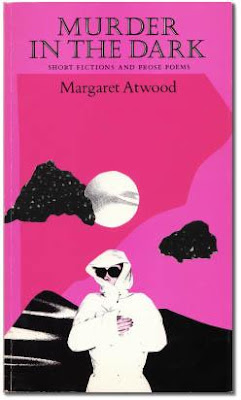 If you decide to throw out those "oversized DC reprints from the 1970s" please let me know!!

Todd, I'd love to see the covers of your "oversized 1970s DC reprints of 1940s comics". I can't imagine what they look like. I haven't read a Vonnegut in years though, over the past few years, I have been reading his foremost student John Irving's stereotypically entertaining novels. And I'd certainly like to read at least one or two books by Atwood, to start with.

There's nothing quite like unearthing and opening a box of books. It's like finding a treasure chest. Depending on how organized you were when you packed, how you might have labeled the boxes, how much of a hurry you were in, anything could be in there!

We had a problem with cat spray on books, mostly graphic novels, many of which had to be destroyed. So later, did the cat.

Happily, so far, Rick, dosing our dim-bulb tomcat with Prozac has kept him from further spraying activity, as far as we have discovered. But he has also gotten fatter...the boxes were unlabeled, simply packed right off the shelves, so usually little knots of authors together...a bunch of Bill Pronzini books in the last box I opened.

Alas, Jack, I'll probably have to sell anything I can that I choose to rid myself of, among the things that have any market value...but I do have some reading-copy war comics from somewhere (I think a colleague wanted to be rid of them and I took them to pass along someday...)

I foolishly passed on buying those BEST FROM FANTASY AND SCIENCE FICTION anthologies when they were available everywhere. Now I buy them whenever I run across them. Great stories!