FFB: THE DEVIL HIS DUE edited by Douglas Hill (Hart-Davis 1967; Avon 1969); UNTHREATENED BY THE MORNING LIGHT by Karl Edward Wagner (Pulphouse 1989) 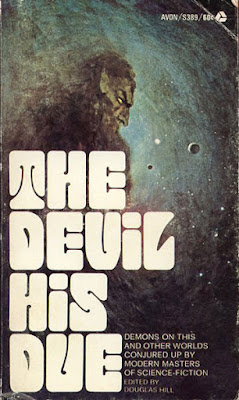 Two sort of hybridized compilations this week, sparked in part by my continuing to unbox my collection of magazines, books, correspondence and other items from storage, and also by the heavy toll this past week has taken on at least the writerly social circles in the UK, with the deaths of writers Hilary Bailey, also an editor of several volumes of the periodical book version of New Worlds, and Emma Tennant, the latter not infrequently a collaborator with Bailey and also the founding editor of the impressive and innovative (and, as the title suggests, hardly stuffy) litmag Bananas. The Karl Edward Wagner is both a magazine issue and a periodical book, which foremost depends on how one chooses to see it (publisher Pulphouse loved to blur those lines with many of its projects), while the older Douglas Hill anthology is one of those which mixes reprinted fiction with new, including first-publication stories by Bailey and some other writers who were, as was Wagner, taken from us prematurely.

The Wagner collection/issue gathers three dream stories by the often brilliant writer, editor and publisher; the first feels almost like a direct transcription of a dream and as such, a bit slight, if evocative; the second, also a near roman a clef involving correspondents to a writer friend or two of Wagner's and Wagner himself, is a bit meatier and more engaging, as well as giving us a bit of insight on the relation of fantasy writers to organized fandom and reader interaction as well as to the professional grind of publishing and agenting the written work.  Sadly, as Wagner reports in his introduction that his regular habits had him sleeping little more than an hour at a time, and that his death was in part a result of his candle-burning at all points lifestyle, which is reflected in "Neither Brute nor Human" (a Poe reference, as Wagner reminds us in the intro).

While "The River of Night's Dreaming" is a bit richer yet, building out from a dream of escape via swimming against currents to encompass an extended tribute to Robert Chambers's The King in Yellow...and to rather anticipate some of the nature of the film Sucker Punch...though Wagner's story is far more deft than that clumsy film (one could see Carla Gugino in the cast of a dramatization of this story, however). Wagner's studies as an MD in psychiatry and neurology are not lost in the story as it's told, either...nor is, as Wagner notes (again in his introduction), the "barrier to final comprehension" that Chambers imbued his work with, "the stuff of nightmares"...an influence that extends to much of Wagner's most memorable horror fiction, such as his early award-winner "Sticks"; likewise, the decadence that Chambers enjoyed exploring is replicated here, to such an extent that Charles Grant rejected the story for his Shadows series of anthologies on the grounds it was too sexually explicit. Stuart David Schiff and Whispers were more open to this sort of thing, which is hardly extreme in the context of Chambers pastiche.  (I've yet to read the Chambers, so was mildly amused to learn that one of the key characters in both the novel and the novella is named Camilla, and in the Wagner is described in such a way as to resemble my mother, who shared that name but was a redhead rather than a blonde, however...at first, I suspected a harkening to Le Fanu's lesbian vampire novella "Carmilla" was desired, and perhaps it was, on Chambers's part.) In his last published work, Wagner would increasingly explore "fringe" sexuality in his horror work...and this volume, though not the story in question, was published five years before his death.

I've usually preferred Wagner's sword & sorcery fantasy, dark as it was, to his contemporary horror fiction, but really should read further in his work in this mode, as well (he was one of the most brilliant of s&s writers, certainly of his generation, along with Janet Fox and a few others--I still need to read my copy of his Conan novel, though I suspect it won't be quite up to his Kane stories); he was, of course, also the longest-serving and almost certainly the most influential editor (even given the excellence of his predecessors Richard and Gerald W. Page) of the DAW Books annual The Year's Best Horror Stories, which series died with him. 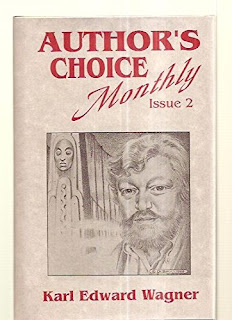 Author’s Choice Monthly Issue 2: Unthreatened by the Morning Light Karl Edward Wagner (Pulphouse, Oct ’89, $4.95, 101pp, tp) Collection of three stories, with an introduction by the author. Also available in a signed hardcover edition ($25.00). A Signed deluxe leatherbound edition ($50.00) was announced but not seen.

Douglas Hill apparently began the 1960s writing nonfiction, including about the history and practice of magic, and by the mid 1960s had begun editing anthologies of fantasy and science fiction, arguing, as he does perhaps most opportunistically in the introduction to this anthology, that SF should stand for "science fantasy" and not be worried about again (a slightly more pat version of how Judith Merril had approached the nomenclature until she decided she preferred her refinement of Robert Heinlein's suggestion of "speculative fiction" to cover all sorts of fantastic fiction)...opportunistically because the conceit of the anthology is supposed to be these are stories about dealing with devils/The Devil in various scientific or at least science-fictional contexts...not really quite true, though, even if the protagonist of Hilary Bailey's fine story is a medical doctor, who finds himself effectively cursed by a local bully with some connection to Satan...and helped by a registered nurse (or the UK equivalent) who has some magical abilities of her own, along with the goodwill of the emigrant community, not at all fond of the bully. The Bailey story might be only the third or fourth I've read by her...she apparently published no collection, and several of her stories, like this one, have only appeared in the site of their original publication...which is a shame, as this is a deft, dryly witty and altogether enjoyable story that might remind you of what Shirley Jackson or Kit Reed (or Avram Davidson, in a restrained mood) might do with a similar notion, had it occurred to them. Hill's choices seem to be rather unsurprising as when he was putting this book together, he was about to become the Assistant Editor of New Worlds, hence was working directly with contributor (and NW editor) Michael Moorcock (at the time, also married to Bailey) and SF Impulse staffer Keith Roberts, contributors to the magazines Thomas Disch and John Sladek, Judith Merril (her story had been reprinted in SF Impulse after appearing in Fantastic), E. C. Tubb (even if he was more likely to have contributed to the pre-Moorcock NW, and had even been the editor of the competing UK magazine Authentic Science Fiction) and John Wyndham; young  American Ramsey Wood had his one fantasy publication here (also never reprinted, as the Disch and Sladek only recently has been); and while Moorcock's Elric story had appeared first in one of  L. Sprague de Camp's genre-shaping sword & sorcery anthologies, there's a good chance it was sold simultaneously to de Camp and Hill for their opposite sides of the Atlantic publications, as Pyramid paperbacks weren't too common in the UK, nor Hart-Davis hardcovers in the New World, I suspect.

The Disch and Sladek is also wryly witty, and has even less claim to being a Devil in Scientific Context story than the Bailey, even if the protagonist is a grieving atheist (who gets shown what for in a way he hardly suspects, and which former Minnesotans Disch and Sladek almost certainly devised with wide grins and not at all nostalgic shudders).  I'm going through the rest of the stories now, re-reading the Merril after some thirty years. I'll definitely need to read some more Bailey, as well, when I've enjoyed, at least, everything I've seen from her. (Disch and Sladek have been...frequently, at least...more easy to find in bulk, even with their work in shorter lengths.) And the kind of bad luck that has recently caught up with Bailey, or for that matter dogged Disch and Sladek at the ends of their lives, also caught up with Hill...he was hit by a bus at age 72, in 2007. Bolts from the blue can get you just as easily as anything else. (And, for goodness's sakes, Hearsts, you could've sprung for some heavier application of ink in this 1969 Avon paperback...the post-cataract eyes aren't so crazy about gray letters on even reasonably undarkened paper...) 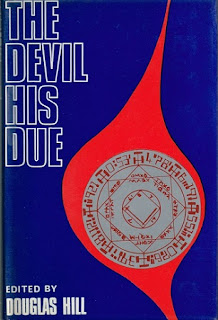 I definitely remember Author's Choice Monthly Todd - OK, that does take me back!

I'll have to track down a copy of THE DEVIL HIS DUE. I have a copy of UNTHREATENED BY THE MORNING LIGHT around here somewhere.