There are all sorts of delightful stories about evil children, as well as merely mischievous children (standard and psychopathic and supernatural); FFB organizer Patti Abbott, mother of a prosecuting attorney and a crime-fiction specialist, perhaps knows something we don't, and called this week for a special attention on the perhaps overlooked examples of this particular genre of novels and, in my case at least, short fiction instead.

So, before turning to the anthologies of Roger Elwood and Vic Ghidalia, perhaps the most prolific miners of this vein, separately and together, in fantastic fiction, some examples that come to mind that aren't included in any of their books cited here... 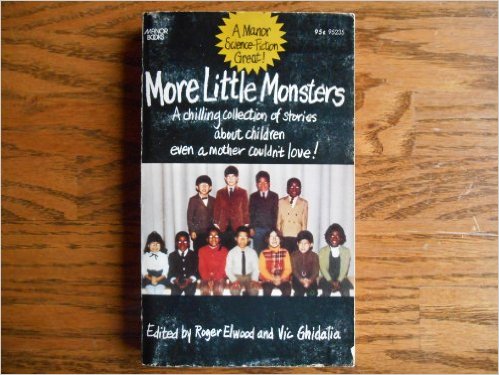 Jerome Bixby's "It's a Good Life" is perhaps the least obscure bad child story, beyond "The Boy Who Cried Wolf" and few others, vying with The Bad Seed and Peck's Bad Boy and probably ahead of Conradin in Saki's "Sredni Vashtar" or "Gabriel-Ernest" or Small Simon in John Collier's "Thus I Refute Beelzy", and on par with the protagonists of The Adventures of Tom Sawyer and the increasingly obscure Penrod and their sequels. Adapted several times for versions of The Twilight Zone and mocked as a result by The Simpsons, it's the most famous of Bixby's works by some distance, and a fine evocation of why, perhaps, children shouldn't be omnipotent. Similarly, Joe Hensley's "Lord Randy, My Son."

Damon Knight's brilliant "Special Delivery" involves another rather more insidious sort of bully, a (to understate) precocious and telepathic fetus who chooses to dictate (rather more explicitly than a fetus might anyway) how its parents get to behave as it develops. A great resolution and last line, which, Knight notes, his first wife actually said upon parturition of their first.

"Matthew Gant" (Arnold Hano)'s "The Uses of Intelligence" involves two smug, and also precocious, early-adolescent miscreants who don't quite discover in time that they are not the most intelligent people in their environment. As a bright young thing when first reading this one, as reprinted from the MWA's own short-lived magazine Sleuth in one of Robert Arthur's Alfred Hitchcock Presents: anthologies (A Month of Mystery, as paperbacked in part as Dates with Death), the dopiness of the young crooks rather offended me at least as much as their viciousness. And I'm reminded of Hensley again; Joe Hensley and Harlan Ellison's "Rodney Parish for Hire" rings a similar change on this basic story, perhaps a bit more convincingly.

Two stories that aren't quite about evil children, so much as nearly so: "The Education of Tigress McArdle" by C. M. Kornbluth and "The Attack of the Giant Baby" by Kit Reed; the first about a robot baby simulator that prospective parents are required to survive before being allowed to procreate; the other about an infant accidentally Made Large (the filmmakers of Honey, I Blew Up the Kids didn't quite come close enough to be actionable), both accumulations of charming and off-putting detail. Half-masticated Mallomars alone. (Kornbluth and his wife had extra struggle in treating with their special needs child, which also led to his writing the unfinished fragment that Frederik Pohl, who had some similar experience, completed and published as "The Meeting".)

And there are many other stories about not so much evil as self-preserving children driven to extremes, such as Graham Greene's "The End of the Party"...and the exploitation of children, such as "The Ones Who Walk Away from Omelas" by Ursula K. Le Guin...or something too much akin, as with the eerie "At the Bottom of the Garden" by David Campton or Joyce Carol Oates's slightly older protagonist dealing with an impossible situation in "Where Are You Going, Where Have You Been?" 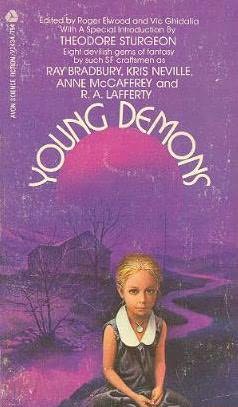 Meanwhile, over the course of five anthologies, the busy and controversial anthologist Roger Elwood (very prolific and responsible for a number of good and indifferent anthologies in the latter 1960s into the late 1970s, among other editorial work and eventually some novels of his own) and part-time anthologist and early collaborator Vic Ghidalia (his day job apparently was as a publicist at ABC television in Los Angeles) managed to gather other stories instead, between them in four predominantly reprint volumes and one all-original anthology. I have yet to see that last, but have enjoyed most of the stories in the other books over the years, and picked up their first joint effort, The Little Monsters, when I was about twelve or thirteen  from some secondhand book source.

But beforehand, another joint anthology, for a somewhat more solvent publisher:

And Elwood exploring, with an anthology of all new stories, rather than one or two, the subject matter on his own as editor: 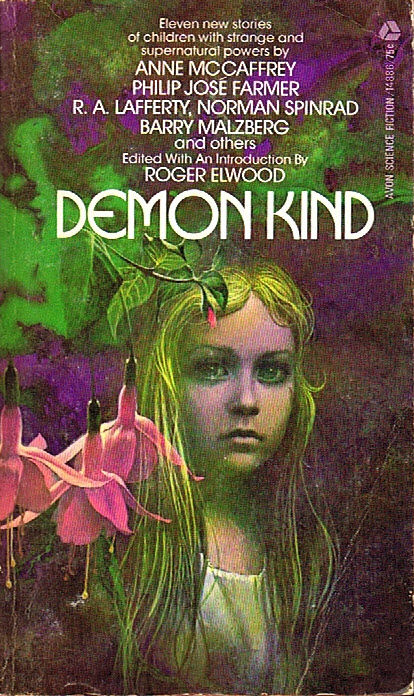 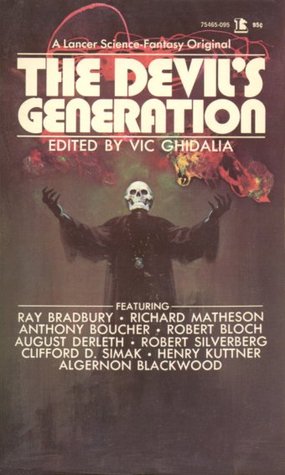 And Ghidalia taking up his own exploration:

One can see that the two editors' tastes were rather similar, and all five anthologies at least look solid. I need to pick up Demon Kind even if the stories gathered there might be minor in each case...the sequel to Kris Neville's most famous story, "Bettyann", makes that story of some special interest even without the potential of the others, including an early story by eventual YA specialist Laurence Yep, along with several old favorite writers of mine. The mostly/entirely reprint anthologies are an interesting mix of chestnuts and more unlikely choices; The Little Monsters is a rare, if not the only, selection not taken explicitly from Weird Tales to include a La Spina story, I believe, that I own. And, certainly, some of these stories vary a bit from the theme of genuinely evil children, even if the malefactors, as in "The Black Ferris", appear to be children at first. Elwood and Ghidalia perhaps do not need to be crusaded for, but in their ways, they did some good work they could be proud of...even if one chooses never to forgive Elwood for most of the Laser Books line.  Certainly, anyone who hadn't previously come across Robert Bloch's "Sweets to the Sweet" or the Bradbury stories, or the far less commonly reprinted Derleths, was likely to feel like they had made a wise investment.

I remember Bradbury's THE VELDT blowing my mind a bit as a teen when I read it first time out. My sympathies may now rest elsewhere frankly ...

Yes, I had no great love for the kids in "The Veldt" when I read it as a child, as well! Likewise, I wasn't too sympathetic to Conradin in "Sredni Vashtar" when I first read it, but it wasn't hard to see where he was coming from (I did wonder what was likely to happen to him after the story was over).

Great choices! Love the covers! They sure bring back memories.

Thanks! Certainly packages on a budget, in most of those cases...but some decent imagery.

Conradin and Small Simon aren't bad children though. They're the victims of bad grown-ups, rescued by powerful and unusual allies.

I'll suggest they're half-bad, knowing what they're setting their annoying guardians up for...

As a father whose three kids turned out not to be monsters, this topic nonetheless still gives me chills along with a wary relief.

You clearly did something right, Matt...we remember, each of us, the monsters in our midst when young...and can see them still among us, not always the same people, as we age...