Well, this week was going to be devoted to the last long fictions published by Joanna Russ and Michael Shaara, but reading about the frustrations of their later careers ended up squeezing out the rereading of the novellas in question...next week, perhaps, while I host FFB while the Abbott family gets ready for the run up, we can hope, to picking up a few Anthony Awards at Bouchercon in Toronto.

I first encountered Mark Twain in very adulterated form, I think...Sid and Marty Krofft offered a typically surreal serialized sequel to Twain's four notable Sawyer/Finn stories as a part of The Banana Splits tv series...and perhaps one or another of the televised film or tv adaptations of the actual Twain stories. But not long after I started reading anthologies, I started reading Twain, and one of the first big fat adult books I tackled was Charles Neider's remarkably foolishly titled Complete Humorous Sketches and Tales (R. Kent Rasmussen notes in his review of the Library of America volumes of Twain's short work, and their predecessors such as Neider's volumes including the sketch and story collection Mark Twain: Life as I Find It, also published in 1961: 'One wonders, incidentally, if Neider recognized the strangeness of calling his Humorous Sketches anthology "complete" while simultaneously issuing another volume [Life as I Find It] which contained sketches that the "Complete Sketches" lacked.'). Nonetheless, even given a similarly ponderous introduction, it was quite the Book of Gold: 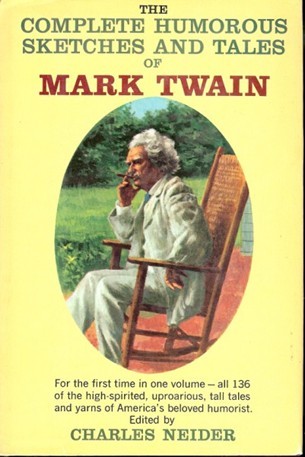 Some of the most famous items before this book was assembled were unsurprisingly among those which have stuck with me the longest, such as "Punch, Brothers, Punch" (my introduction to the notion of "buff" as a color), "Fenimore Cooper's Literary Offenses", "Carnival of Crime in Connecticut" (where my family and I lived at the time) and of course the Jumping Frog, but no few others were more than fitfully amusing, even when they more thoroughly sent me scrambling to fill in data points (aside from what aide Neider provided in his notes). This one I borrowed (several times to get through it) from the Enfield library and not long after, at a yard sale, I picked up a battered copy of Neider's earlier The Complete Stories of Mark Twain (similarly misleading a title) and made my more leisurely way through that volume, as a fine complement to my reading the Sawyer/Finn/Jim stories and the single novels in the Signet Classic editions I gathered while still in elementary school...finishing most of his work in the summer before my 7th Grade matriculation into a new school in Londonderry, NH. The Enfield Central Library also had no few spoken word LPs for members to dig into, and one Caedmon item featured Brandon de Wilde narrating a couple/few chapters of The Adventures of Huckleberry Finn on the flipside of Walter Brennan reading "Jumping Frog" and "Jim Baker's Bluejay Yarn"--this was one of the many I dubbed on cassette or open-reel tape and listened to repeatedly over the years...


Here's Brennan reading "The Celebrated Jumping Frog"...which was released, despite the assertion of the WFMU blogger who posts the audio file, by Caedmon Records in 1956, the year before Brennan began his run with The Real McCoys television series.

And here's Brennan reading "Jim Baker's Bluejay Yarn" (from A Tramp Abroad, not "Tramps Abroad") and there's a weird little second-long glitch in this YT post recording that isn't present in this slightly scratchy WFMU post taken from a copy of the lp. 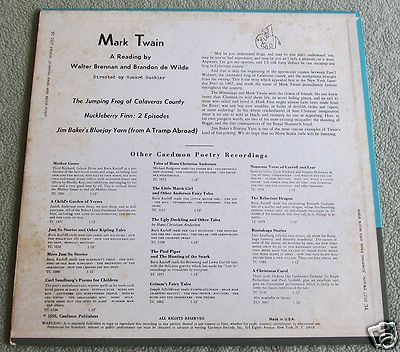 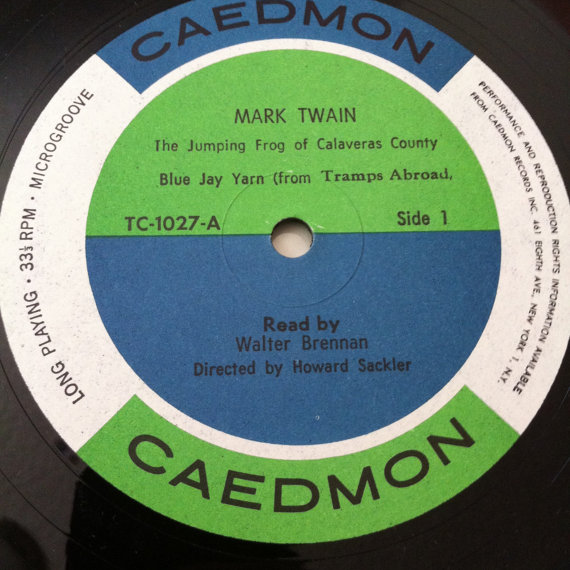 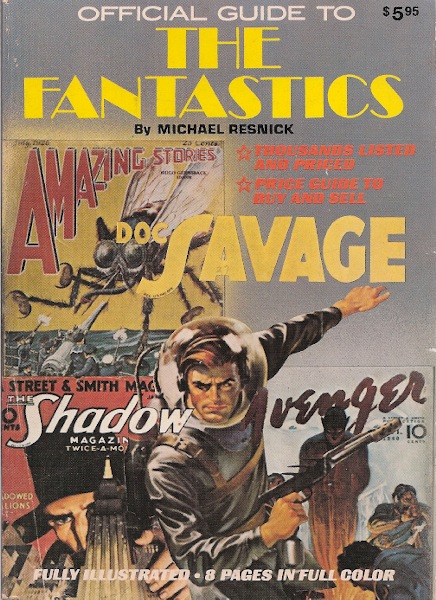 One development that came along with the relocation to New Hampshire was the discovery of how many interesting fiction magazines were still being published in 1978, and I gathered most of those I could find at a store in Derry called Book Corner, which also had a small alcove of remainders in the back, one of which was stray copy or so of this item (with one title on the cover and another on the title page), by a writer I hadn't previously encountered, before he was most likely to sign himself Mike Resnick, providing us with a price guide full of warnings that prices in this field were widely variable and extremely dependent on condition...but which, along with such other purchases as Brian Ash's The Visual Encyclopedia of Science Fiction, gave a vivid sense of the history of these fascinating magazines and their stablemates and fallen fellow-travelers over the years. Resnick also missed a trick or two, noting without explication that the great expense of the citation for The Ship That Sailed to Mars by William Timlin was no typo...no mention of the gorgeous artwork in the one published edition then extant being part of the allure. But it was useful and fun for a catalog,,,and I, not long after picking this book up for 50c, started collecting older back issues with a grab-bag from dealer and small-press publisher Gerry de la Ree at not Too much more per good-to-reading-copy items.

Some illustration from The Ship That Sailed to Mars: 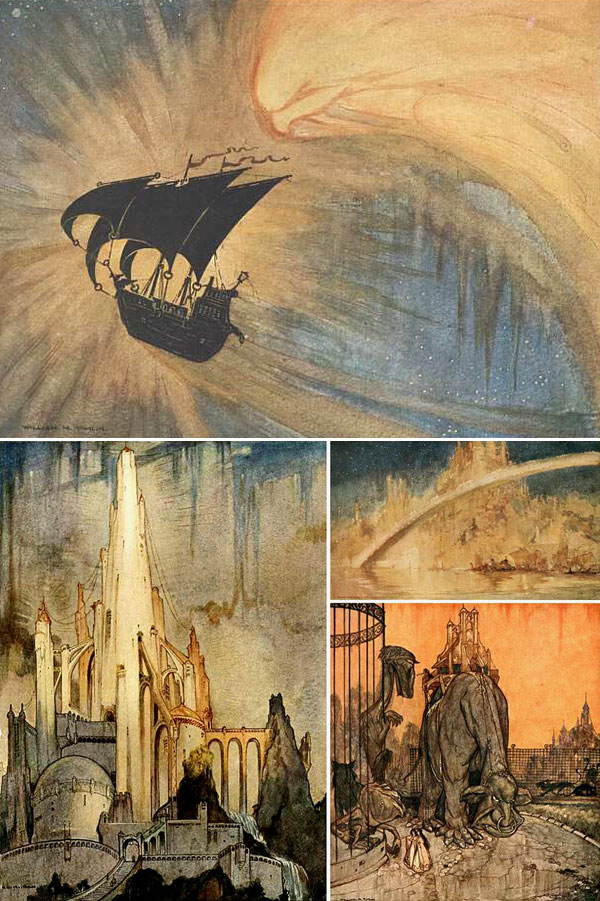 Have not read enuf Twain. Simple as that, and it shames me!

There is plenty to dig into! Rasmussen's case that his earlier blithely overlooking the Library of America collections was dead wrong is fairly persuasive (for similar reasons, I'd never looked too closely at them), so those, at very least, await you with the various novels and travelogs.It is remarkable how much ground he chose to cover, even when he occasionally nods.

In 1985, Charles Neider came out with a revised edition of "The Adventures of Huckleberry Finn". He included a chapter with Huck and Jim that originally appeared in "Life on the Mississippi". Somewhat more controversially--at least, in my opinion, it SHOULD have been controversial--Neider removed 8,300 words from the last third of the book, when Tom Sawyer reappears and the novel takes on a more farcical turn. Doubleday promoted the book as being "truer" to Twain's vision than what Twain actually wrote. A lot of people over the years have disapproved of the original Sawyer section, including Earnest Hemingway (a criticism Neider provides as a justification for his changes in his introduction) but if that's what Twain wrote, that's what Twain wrote. Learn to live with the flawed ending, if it indeed is a flawed ending. Only Twain should get to decide what was and what wasn't his vision.

That Huckleberry Finn TV show you mentioned was truly strange. You had live actors playing Huck, Tom, and Becky Thatcher interacting with Hanna/Barbara animated versions of Hercules, King Arthur and other mythical figures. One moment stands out. The three-headed dog Cerberus gives Huck, Tom, and Becky a friendly lick across the face, or faces, as the pooch does all three at once.

That's ERNEST Hemingway. No 'A'.

Neider's arrogance and obvious sense of "proprietorship" in re Twain was hard to miss even at a very young age...the addition of the LIFE chapter would be a useful one, but the excision of the easy farce chapters to end the book is at least as sad as more recent bowdlerized versions...your memory of that series--was it HB rather than Krofft?--is clearer than mine, and I'm not altogether sure I envy you that...thanks for the info.