Where were you in the summer of 1976? In June, my family and I were moving from Connecticut to New Hampshire; I was reading The Adventures of Huckleberry Finn. I was definitely on a Mark Twain jag, reading the Tom/Huck/Jim fictions in order of publication, so there's a good chance I read Tom Sawyer Abroad and "Tom Sawyer, Detective" in late June or July. I turned twelve in August. I had read stories by Avram Davidson and Algis Budrys, the headlining writers in the issues under discussion, in Robert Arthur's Alfred Hitchcock Presents: anthologies by then, but they hadn't yet become among the most important writers whose work I would read, at very least to me. I had read some back issues of Analog, Vertex Science Fiction and Alfred Hitchcock's Mystery Magazine, but had not yet sought out new issues. I had all but given up on standard comic books--maybe an issue of Weird War Tales or two, more nostalgically than otherwise, purchased that year; most of my newsstand investment was in Mad and one or two issues of National Lampoon, while mostly reading paperbacks and the odd library hardcover or discard/booksale/secondhand item in boards, aside from what my parents brought home...

Meanwhile, on small budgets, working out of their houses, Ed Ferman in Cornwall, in exurban northwestern Connecticut, and Ted White in the DC suburb Falls Church, Virginia, had both produced impressive issues which were sitting on some newsstands around the world. 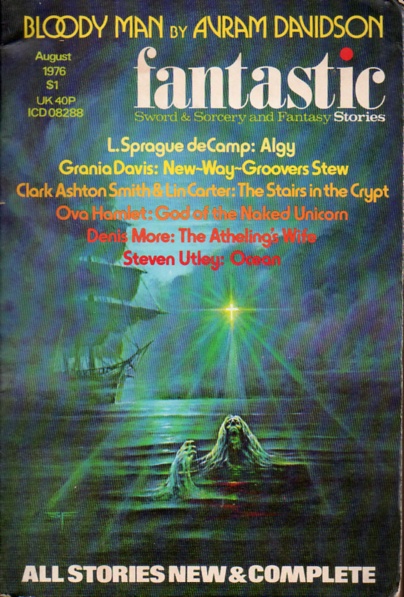 In the Fantastic, we have the first of Davidson's Jack Limekiller stories to be published, a series fondly remembered by those fortunate enough to have read the stories as they appeared, mostly in F&SF (the frequency with which writers published in both magazines was high), and as collected in the small press volume ¡Limekiller! (exclamation points probably unfortunate). Limekiller lives in British Hidalgo, which somewhat resembles the British Honduras then, and Belize now, where Avram Davidson and Grania Davis and their son Ethan lived for a period, after moving from Mexico (and thanks to Dennis Lien for pointing out in comments below that I had relocated them to Guyana, for reasons only of Middle-Aged Moment). British Hidalgo does seem to have rather more indisputable supernatural occurrences in it, however...one could choose to use the term magical realism to describe these stories, if that wasn't just a cop-out label for well-grounded fantasy fiction set in the otherwise "real world" ...Grania Davis has a story in the issue as well; she, who died in that sudden run of losses of some of the best women writers in fantastic fiction last year, had long since divorced Davidson, but they had remained friends, and even occasional collaborators on fiction, up to co-authoring Davidson's last novel published during his lifetime (and serving as the co-editor of his posthumous collections and longer fiction publications). "Dennis More" (sic)/Keith Taylor might've had a broader following than he has, had he published more novels in the '70s and '80s...perhaps being Australian didn't help, at least in terms of promotion; more recently, chronic illness has been keeping him from work. Steven Utley was another example of a writer who probably should have reached a larger audience than he did, with consistently good and occasionally brilliant fiction much-appreciated by cognoscenti, but not terribly widely-read beyond the more literate Members of the Community...even such peers as George Alec Effinger seem to have reached a slightly larger readership, even if in the latter's case too much of it after his early death.

Lin Carter's usually dire attempts at "posthumous collaboration" with Robert Howard on Conan stories (which at least had the effect of boosting Fantastic's sales) are not notably improved upon by his attempt at doing so with a Clark Ashton Smith fragment...particularly given how much more elegantly Decadent Smith's prose was, elegance not Carter's strong suit. I always enjoyed Richard Lupoff's intentionally parodic pastiches published as by Ova Hamlet, in distinction, even when I hadn't yet read the targets (in this case, the Doc Savage series of stories). L. Sprague de Camp, Carter's senior collaborator on new and "posthumous" Conan stories, had a bit of renaissance of his own short-fiction writing in the mid '70s, not least with the amiable Willy Newbury fantasies in both magazines here and in other issues.

And the book reviews of Fritz Leiber, Algis Budrys and Barry Malzberg, among the other rotating set of reviewers (wit a few exceptions) in F&SF, were particularly key reading for me in the years when I was gathering these as back issues...Lupoff would also pop up with book reviews in White's Fantastic, Davidson in Ferman's F&SF along with Joanna Russ, and not a few others of note (Judith Merril was the first book columnist during Ferman's editorship, then James Blish was the primary book reviewer until he couldn't continue, and Budrys took on the bulk of the reviewing for a decade-plus). I tended to enjoy Pacifica Radio dramatist and bookstore owner Baird Searles's multimedia reviews as well, as I've mentioned elsewhere on the blog, and Isaac Asimov's science essays, even if Searles (the most consistently-contributing a/v reviewer to date in the magazine's history) has had such predecessors and successors as Charles Beaumont, "William Morrison", Samuel Delany, Harlan Ellison, Kathi Maio, Lucius Shepard and David Skal to shine as brightly as he did or even a bit more so. 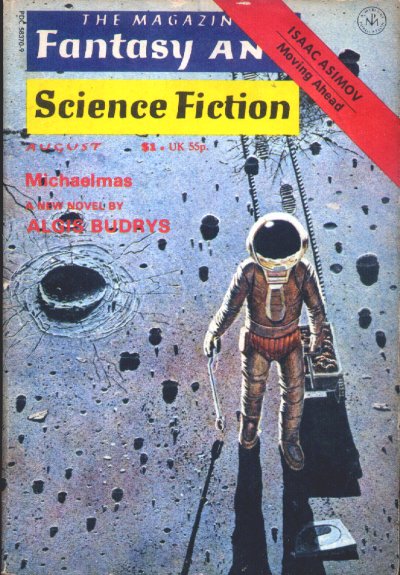 These issues feature the novel Michaelmas, perhaps a bit shorter than the text of the not terribly fat novel as published in hardcover and paperback by Berkley/Putnam, the first edition later in 1977. It was Budrys's first novel in a decade, though he had already published a novella about Laurent Michaelmas, and would publish another afterward (and had hoped to publish yet another). Also, Budrys was perhaps dreaming big for this novel, somewhat jocularly referring to the potential interview with Johnny Carson (who in the mid-'70s would still tuck interviews with the occasional writer into the last half hour of his 90-minute Tonight Show). Not sure how much juice Berkley put behind the book (not so very much, as far as I know), but it wasn't a breakout for Budrys beyond his pre-existing audience, even if it did well for him (without the kind of revised awkward title Fawcett Gold Medal had blessed his previous two novels with).

F&SF throughout its run has often featured work by writers who would drop in to fantastic fiction only occasionally, whether this was true of their writing generally or simply in the fantastic-fiction field. Richard Frede, best known for his 1960 novel The Interns, was one of the busy writers who only on occasion would contribute a speculative fiction, while such others as Liz Hufford, Don Trotter, and musician and songwriter Tom Rapp were examples of the relatively non-prolific (at least in terms of prose or non-lyrics poetry). On the other end of the spectrum, within fantastic fiction and without, Jane Yolen, Curt Siodmak (even given his best-remembered work is in film), Herbie Brennan (at least as well-known now for his books about spiritualism and his work in role-playing games), and three relative non-favorites of mine, Michael Coney (tended toward goofy concepts), Raylyn Moore (tended toward relatively trite fantasies flavored heavily with hostility to feminism; the Phyllis Schlafly of fantastic fiction), and Robert F. Young (who tended toward trite ideas handled only mildly less heavy-handedly than Lin Carter, and with even less wit...at least Carter's more lighthearted pastiches, such as his quasi-Doc Savage fiction, had a certain bounce). Barry Malzberg, occasional book-reviewer and more-common fiction-contributor (and later honoree with an F&SF special issue) as well as Ted White's predecessor as editor of Fantastic, and regular fiction and occasional nonfiction contributor there, was also notably engaged as Edward Ferman's co-editor on some impressive anthologies in the 1970s; he likes Davidson's The Enquiries of Doctor Eszterhazy far less than I do. But, given everything, he's allowed to be incorrect in this.

And the latter F&SF issue features one of David Hardy's cover paintings involving the adventures of Bhen, the BEM (or Bug-Eyed Monster), an occasional series starting in the 1970s, and often, not exclusively, involving Bhen hanging around NASA probes. (Primarily writer) Greg Bear and Stephen Fabian do notably good work on their covers, above, as well. 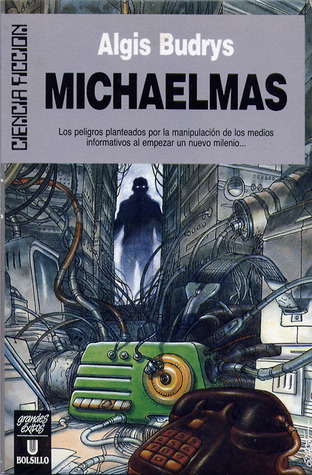 I like the cover of this Spanish edition of Michaelmas better than the Anglophone editons' covers...such as the Berkley paperback, with the same cover painting as the hardcover first edition, with blurbs pasted over, below: 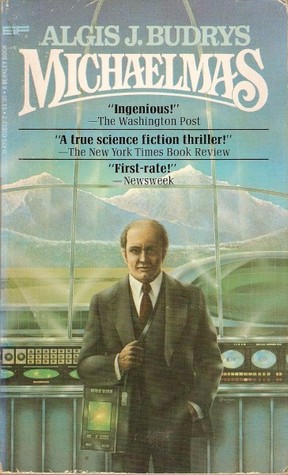 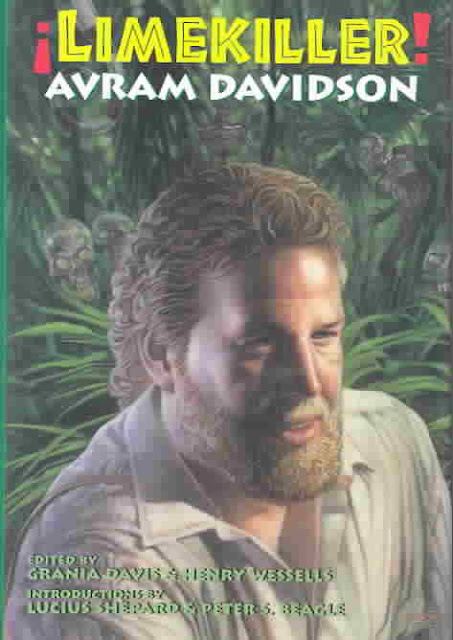 I remember those issues well.

I continue to think that Algis Budrys is just that little bit underrated. Sure, ROGUE MOON gets a fair amount of attention, but most of the rest of his work is of similar value. The two latish F&SF novels, MICHAELMAS and HARD LANDING, are really strong work, and work that nobody else could have done. And there are so many excellent stories -- from the '50s there's "The War is Over" and "The End of Summer" and more; from the '60s "Wall of Crystal, Eye of Night", "For Love", and "The Master of the Hounds", and from the '70s there are the other two Michaelmas stories ("The Nuptial Flight of Warbirds" and "A Scraping at the Bones") plus "The Silent Eyes of Time".

The Limekiller stories are also excellent, of course.

I'd say Budrys is more underappreciated than underrated, but certainly HARD LANDING wasn't given its due (you'll see my review of it on the blog)...too many too willing to judge him mostly for his paid work from the Scientologists, taking their money to put it to damned near the only good use it has ever been spent on, the Writers and Artists of the Future programs (even if the source of the funds has tended to scare off not a few over the years)(amusing how many LDS writers have, given the resistance the Mormon faith has faced, have been particularly willing to take the money and tutelage and go forth, even before Orson Scott Card signed on, or Dave Wolverton succeeded Budrys after the latter walked away).

John Boston made the effort to seek out every Budrys story he could find, in search of the unreprinted treasures, but mostly found that Burdrys was pretty good at making sure his best short work was collected and recollected, even if too much of it was out of print for too long. ENTERTAINMENT is a fine selection, as are all his other collections.

And Dave Langford and his partners have done valuable work gathering up the F&SF book columns, to go along with the first BENCHMARKS volume of his GALAXY columns...even if the last F&SF columns demonstrate him growing restless with the task again, as he had at GALAXY (though at GALAXY, the new publishers weren't paying reliably, while the late columns at F&SF were slight in part due to his working attention being spread too thin...even as his health was beginning to fail...).

I wish someone would do a collection of his other essays, beyond the one obscure, limited edition volume. Probably one of the things I should be doing already. Among so many.

And Davidson's copious best work is mostly in electronic "print" at least, I believe...

The Davidson family lived for some time in British Honduras (now Belize) in Central America; I don't believe they ever lived, as you have it, in Guyana (which is in South America).

I like the Limekiller stories a lot, but that's unsurprising, since I like almost everything Davidson published a lot.

You are correct! I have a sneaking desire to conflate British Honduras/Belize and Guyana. I Really Should've Doublechecked...thanks!