Newsstand, somewhere in or around Detroit, ca. December 1964 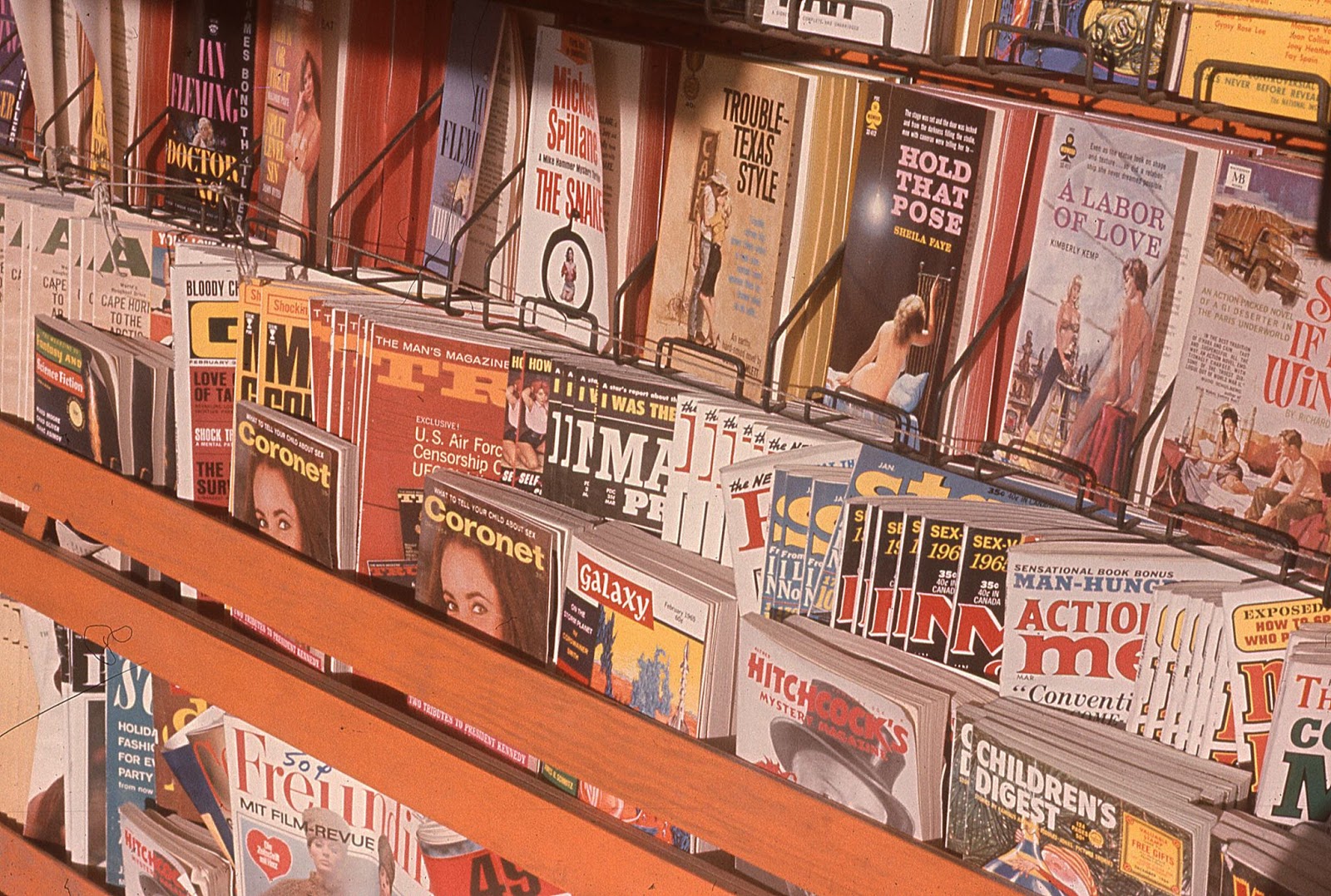 What first caught my eye about this photo, as posted in the Facebook paperback/pulp/related discussion forum by Kevin Brubaker some weeks back, were the Winter 1965 issues of the digest-sized fiction magazines...as I noted there, aside from CORONET (an inoffensively bland general-interest magazine, as I recall it in the 1970s), these digests were all major sources of joy and influence for me at some point in my life, and the surviving magazines, THE MAGAZINE OF FANTASY AND SCIENCE FICTION and ALFRED HITCHCOCK'S MYSTERY MAGAZINE, remain so (a few issues I had of CHILDREN'S DIGEST and its younger-skewing companion HUMPTY DUMPTY when I was about four or five probably predisposed me permanently toward digest-sized fiction magazines).

My guess is that with the open display of Midwood porn novels of the mid '60s amid Mickey Spillane and Ian Fleming paperbacks, and Macfadden-Bartell low-budget items mixed in, and the fact that the Men's Sweat magazines are getting more prominent placement, packed on the upper magazine rack while THE SATURDAY EVENING POST and SEVENTEEN issues are on the lower rack (along with a German "film revue" magazine, not altogether unlikely to have been of the Kind Men Like...or at least to have some photos that wouldn't appear in a US film magazine of the era), that this newsstand was in a tobacco shop or a truck stop in or around Detroit; the slide's purchaser/Facebook poster Kevin Brubaker thought it was shot in February 1965, but it was probably taken, as The Saturday Evening Post on the stand is the 12 December issue, in the first week of December 1964 (see last photo below). 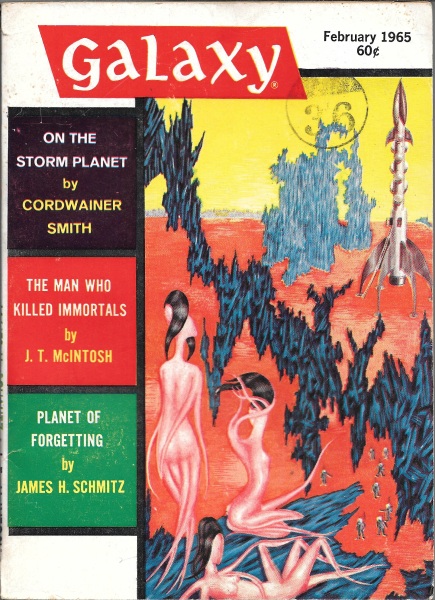 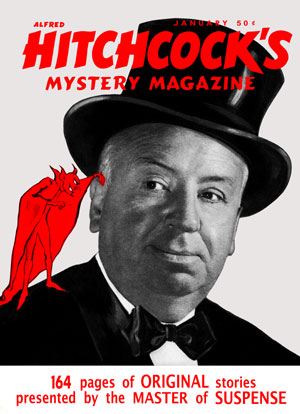 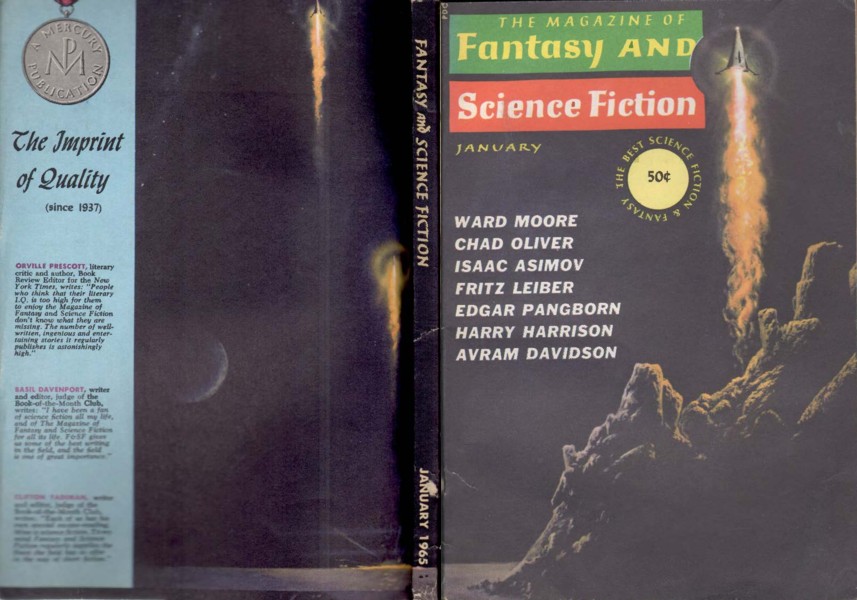 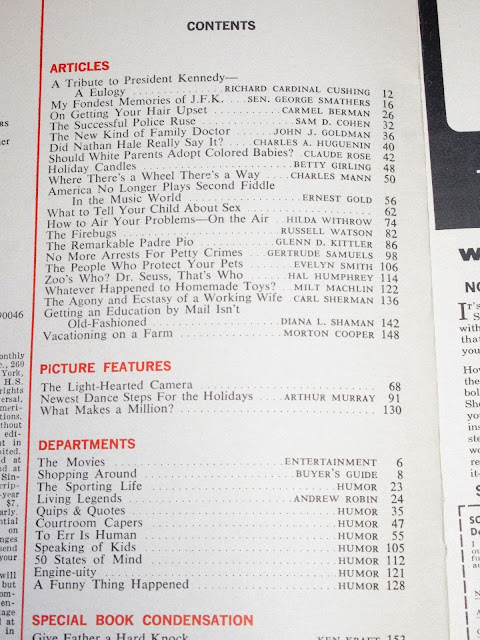 This issue of SEP's contents:

...almost a pity it wasn't the next issue, which featured a short story by Gina Berriault, previously blogged about here...then again, J. B. Priestley has gotten some attention here...

A historical gem. Those that remember "newsstands" have little left to go on but memories. Mine is of the newsstand under the canvas awning at the Owl-Rexall Drug store on Sherman Way in SoCal's San Fernando Valley. Purchased many 'a comic and monster 'zine there, and ogled the men's mags when I could get away with it!

That looks like it may be Liz Taylor on the cover of Coronet, but I can't tell if the eyes are blue or not.

John, it's true that most drugstore and supermarket newsstands aren't what they once were, but a few still have a pretty good array...and Barnes & Noble stores, if you have one handy, apparently still know that their periodicals are one of their continuing draws...you could still ogle some of the skin magazines that survive, though for reasons of advertiser support and perhaps too similar conspicuous consumption there seem to be as many, if a thinning number, of wristwatch magazines...

Nothing wrong with your eyes, violet or otherwise, Kirk...that's Taylor on the Coronet...see added images...

Interesting the digests shown, and those not. For instance, no Analog or Ellery Queen.

I suspect that the magazine jobber(s) gave this place some "makeweight" titles to supplement the men's sweat magazines they mostly wanted. It's possible that EQMM and ANALOG were elsewhere, out of this angle/view (I have to wonder what that M, H or Y title at the lowest right corner is).

Coronet seems to have been the poor man's Reader's Digest. Just imagine reading adoption article and then looking forward to Padre Pio in the same issue! I recall newsstands in downtown Newark, NJ having the same mix of mags and Midwoods.

What kind of newsstands were they? I have a sense that Midwoods and Greenleaf Classics and the like were mostly behind counters, outside adults-only contexts, in their heyday.

Just your average newsstands on Broad Street. Maybe Newarkers were more dirty minded than folks in other cities! Also, the mid-60s Midwoods were pretty tame (metaphors, not body parts) compared to what came later.

I suspect at least some urban newsstands were generally less worried about getting hassled for having the (as you note) elliptical-phrase adults-only paperbacks...or at least urban newsstands outside the Bible Belt and other easily outraged communities.

Certainly the come-ons from "mainline" paperback publishers were about as salacious, still, frequently, in the mid-'60s.