The Very Small Press, and a Brief Form of a Little, Brown Book 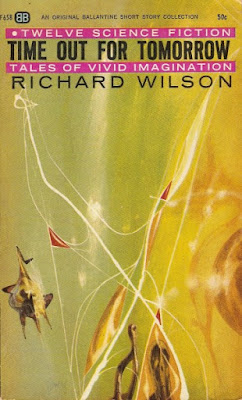 Richard Wilson isn't  "The Forgotten Writer" of the 1950s and '60s, but he'll do till another unjust example asserts her or himself (next week, no doubt). In his youth one of the NYC-based Futurian Society group of fan writers, editors, artists and more, Wilson wasn't ever the flashiest nor most prolific of the bunch, but his wry and empathetic approach was notable early on...and that he was not too prone to pomposity might be suggested by his most sustained series of works being the stories about the protean Harry Protagonist (with the first two stories meant to be retro-fitted into the series in a mooted collection that has not yet appeared): 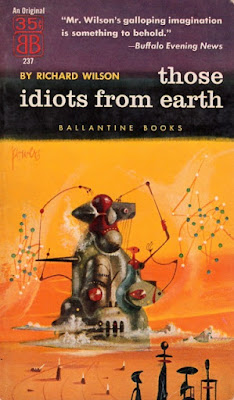 Even more remarkable, even given his primary career, more than simply his day job, for most of his adult life was as a wire-service journalist (first for the small Trans-Radio Press, as the primary staffer in Chicago, then for Reuters in NYC--sometimes working with his wife, Doris "Leslie Perri" Baumgardt, and his old friend and collaborator Cyril Kornbluth), he published only three novels, the last in 1960 and that a short one, released as half of an Ace Double with one of Andre Norton's novels, and a novella, "The Story Writer", in 1979. But when he did publish, he was often collected in the year's best volumes and on the shortlist for or winning the SFWA's Nebula Award, and at least two of his stories from the late '60s, "Mother to the World" (1968) and "A Man Spekith", were widely hailed and (it was perhaps hoped) suggested a newly sustained re-engagement with writing new fiction. As it turned out, not so much, till after his retirement from a position as instructor and archivist at Syracuse University...and those stories were not collected in a Wilson volume till well after his death in 1987, in a pair of volumes edited by John Pelan, collecting his best short work, issued by Ramble House with the unfortunate amateurish packaging that well-meaning imprint tends to offer. 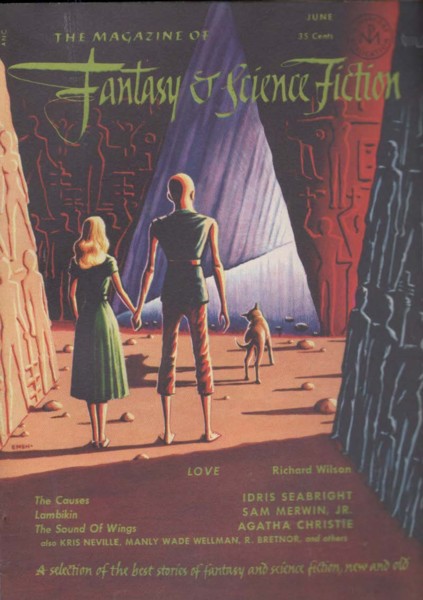 The late Thom Jones, best known still for his first collection The Pugilist at Rest, is not a forgotten writer at all, though he's not a name to conjure with at this point...he apparently wished to have readers (and editors such as Joyce Carol Oates and Raymond J. Smith) forget what I think might be his first published story, "Brother Dodo's Revenge", a fine animal fantasy from a young writer which seemed to most embarrass him in its publication site, The Magazine of Fantasy and Science Fiction, March 1973, an issue where he shares space with Avram Davidson, the poet Walter Kerr, John Sladek, Edward Wellen, Dean McLaughlin, Waldo Carlton Wright, and, it's true, Andrew Offutt in one of his more presentable efforts in the 1970s, an unusually stag cast for the magazine, and what is probably still Harlan Ellison's best single shorter work, "The Deathbird", as the cover story, a cover by Leo and Diane Dillon. But, then again, one must keep up appearances, particularly if one is a pompous and ambitious up-and-comer in the 1990s. Hence my never actually purchasing a Jones volume, but I do have this expensively-produced, die-cut example of a promo sampler of stories from his second collection, as issued in early 1995 as an enticement to reviewers and particularly book-buyers, on the wholesale and perhaps even retail level (I don't remember if we had stacks of these to put out at our bookstore, but it seems likely). 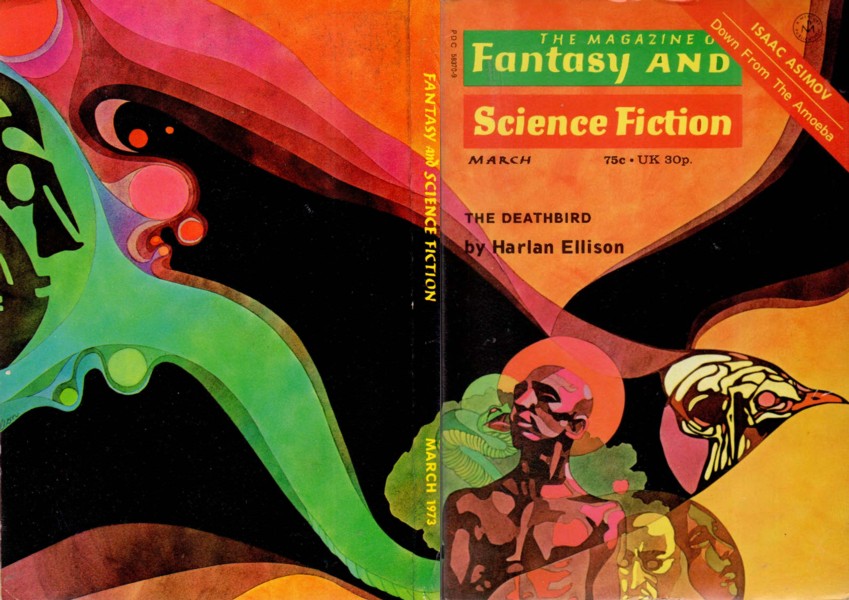 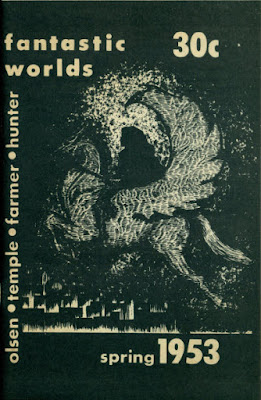 And then, back in the earliest 1950s, there were (as there had been going back to the 1930s and would continue to be to the present) the more ambitious examples of the fannish small press, with few "semiprozines" (the mildly budgeted little magazines of the fantastic-fiction community, which made token payments to contributors) but a few more ambitious fanzines, which featured some notable contributors offering fiction and essays and other writing and art which was perhaps not quite right, or too eccentric or personal, for the paying markets. 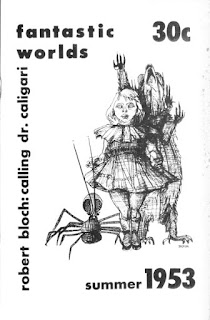 Fantastic Worlds, Summer 1953
as above 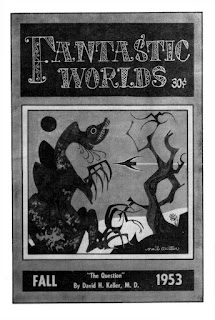 Fantastic Worlds, Fall 1953
as above

Most of the reason these have caught my eye is the early publication of fiction by David R. Bunch, who would continue to be one of the more interesting if polarizing contributors to the field, mostly in the form of vignettes and short fiction, much of it set in a future human society of Moderan, where humanity has become increasingly flensed by literal as well as metaphorical and spiritual mechanization...the satirical variations he ran on this theme, and in other allied work in other settings, was usually deft and engaging. (To place him in the firmament, perhaps consider him as somewhere between Theodore Sturgeon and R. A. Laffterty, and pulled a bit toward the "Cordwainer Smith" orbit, but with the intensity of focus of some of Barry Malzberg's work.) And that these three issues, at least, are online, and ready for all to see. It's a useful service, being able to dip into the content, if not necessarily the context, of these productions of their time...and unlike the back issues of the professional magazines, copies of this and other fannish productions are even less likely to come to the open electronic or surviving bookstore market.

I confess: I bought the Richard Wilson paperbacks chiefly for the cool covers. But, you're right. The stories are worth reading.

Well, Richard Powers did some compelling work...and so did Wilson, and not a few others in this week's entry...

I confess I tend still to plump for the somewhat uncharacteristic "On the Downhill Side" as Ellison's best story. He had a tendency for excessive bombast, and for stamping on a point until it was flattened right out. Still, usually there was plenty of interest in among the excess.

I agree, his tendency was to work every emotional angle he could in his stories...and I think "The Deathbird" manages to do this better than any of his other stories...his similar "The Man Who Rowed Christopher Columbus Ashore" is only a little less impressive, and deserved its placement in that year's BEST AMERICAN SHORT STORIES. The incorporation of autobiographical elements and the modified Dos Passos approach of "The Deathbird" definitely works for me. More traditionally focused stories such as "Pretty Maggie Moneyeyes" and "The Man Who Was Heavily Into Revenge" are comparatively restrained, and also powerful, and I like "Slide" a lot, as well. And even such antic pieces as "Santa Claus vs. S.P.I.D.E.R." (mostly a superspy spoof) have more heft than one might expect going in...I'd call it underrated.

My favorite example of a story that has a devastating opening, that the rest of it has difficulty, and fails, to quite sustain, would be "Strange Wine"...from the 50th Anniversary issue of AMAZING, and the title story of one of his best collections...the '70s was his best decade so far, which isn't too surprising, and a lot of good work before and after.