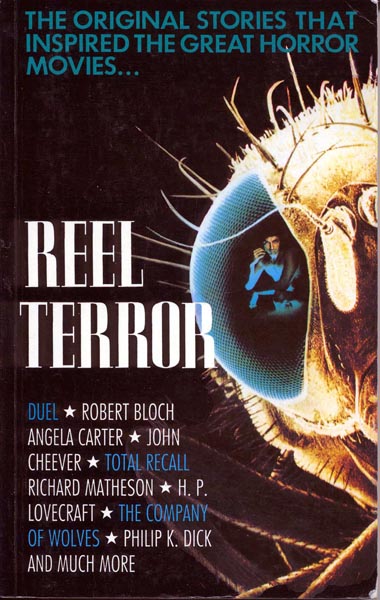 With Real Terror, Sebastian Wolfe does an interesting job of collecting a rather diverse set of stories, which served as the source or at least starting point for a similarly diverse set of films...Wolfe stretches the boundaries of horror fiction past the breaking point, but does so in a fairly interesting way, including stories which are all suspense or barely horrific dark fantasy or suspenseful in their science-fictional or heavily metaphoric contemporary/mimetic ways, but are not by the usual definition of the term horror fiction. They are gathered together in large part because they are good fiction, which is less thoroughly true of the films cited for reason of inclusion...Total Recall is fairly atrocious in Paul Verhoeven's usual rancidly satirical way and a very poor adaptation of the Philip Dick story, and Twilight Zone: The Movie uses Jerome Bixby's "It's a Good Life-" as a framing device in a most inept fashion, as opposed to the relatively effective way the story was adapted for the original tv series. I'll even go as far as to say Freaks is a bit of a pudding of a film, despite some good bits and muddled good intentions; Tod Robbins's short story is far less sentimental about the denizens of the sideshow, and while unfantasticated is at least as ridiculous a conte cruel; it's probably the weakest work of fiction included here. Duel, the telefilm, the first project Steven Spielberg was to direct that wasn't part of a television pilot nor a series episode, doesn't hold up to adult scrutiny, though I did enjoy it as a child when it was first broadcast, and it helped set Spielberg on his way to his profitable career in almost exclusively clumsily manipulative films (those that vary, such as 1941, are usually simply inept). Asylum, which incorporates four Robert Bloch short stories, and Die, Monster, Die, which is loosely based on the Lovecraft story, are simply disappointing, if watchable. I've yet to see Revenge of the Zombies, based on the Thorp McClusky story, a 1943 Monogram film no less (and therefore of nearly no budget) that Wolfe cites as the first to have relatively traditional zombies on the loose on in the U.S., rather than restricted to Haiti or perhaps another Caribbean setting. The remaining films, all more or less hewing to the titles of their source stories (or in "The Golem"'s case, an anecdote, a folktale citation), are rather good adaptations, the golem tale seeing at least three notable silent-film productions and "The Fly" getting at least two rather good (if in both cases, in differing ways, over the top) major productions in film.

It's the quality of the fiction that makes the book better than average; Wolfe certainly doesn't offer much more than a functional introduction, and citations of the films and their directors (but not the screenwriters) (with poorly if somewhat eerily reproduced stills from the films as illustrations) before each story. Here's the Contento/Locus index entry for the book:

Even the Robbins story,  the weakest and most hokey of the inclusions, is worth the look if you haven't read it elsewhere; one of the more ridiculous juxtapositions of Wolfe's is to use the still demonstrating the fate of Cleopatra in the film Freaks, which is far more immediately grotesque if only slightly more improbable than that of the story's corresponding character Jean Marie.  The Lovecraft story is one of his least distractingly purple, one of a few to appear in science fiction magazines rather than his most common market, the horror, fantasy and occasional borderline suspense and sf magazine Weird Tales (the ISFDB index, below, seems to indicate a 1945 revision, but I believe this is driven solely by the title as reprinted here and first used in a 1945 collection featuring the standard US spelling of "color" rather than the standard Commonwealth spelling, which Lovecraft would've and had favored). Robert Bloch's "Lucy Comes to Stay" was, along with "The Real Bad Friend," one of Bloch's suspense stories that were direct prototypes of what he would work out far more fully in his novel Psycho, which is also better than its famous film adaptation (and vastly better than the self-indulgent remake), as good as the 1960 film was (and some of the much-later sequels and prequels are of merit, as is Bloch's novel Psycho II, unrelated to the film--sadly, Bloch's second novel sequel, Psycho House, is the worst of his novels I've read so far, well below his standard).

Not having read these stories elsewhere is half the trick, though the inclusion of John Cheever's "The Swimmer" (also a chestnut, but not often classed with horror fiction despite the bleak absurdism of the protagonist's plight; Cheever would track more obviously into the supernatural with such stories as "The Enormous Radio")(also better than Burt Lancaster's nonetheless fine pet project film) is not so likely to be encountered in horror anthologies so much. Any more than the surreal sf, even given that surreal nature (far less ham-handed surrealism than in the film) of "We Can Remember It For You Wholesale" (the title referencing a whole genre of old jokes)--more thoroughgoing Dick horror such as "Upon the Dull Earth" or "The Father Thing" alas has not yet made it to the cinema (both could be brilliant thus), at least as far as I'm aware. The Angela Carter (Wolfe sadly notes her death, just as the book was going to press, in his introduction) is also better as she wrote it, but the film is solid; William Fryer Harvey's story isn't quite the neat masterpiece of his "August Heat" (also effectively dramatized for television, and perhaps in at least one short film aside from tv production), but it is his Other most famous story. The Matheson, also more a suspense story, even given the huge success of the telefilm (and eventually inspiring such variations as the film Joy Ride), had appeared in surprisingly few anthologies and only one of Matheson's collections by 1992, as Wolfe notes. The McClusky story has gotten more of a workout since inclusion here, as well, because...zombies.

And the Bixby story, much as with the Langelaan among English-language readers, remains the key story in his career, despite coming close with other notable work (his vignette "Trace" is a resonant favorite of mine)...much more horror than sf, despite first appearing in Frederik Pohl's notable pioneering series of anthologies of original fiction Star Science Fiction, and also included in the first volume of the SF Writers of America's canonical anthology The Science Fiction Hall of Fame (edited by Robert Silverberg, working from a poll of the membership). Richard Matheson's first published story, "Born of Man and Woman", also more horror (or even borderline suspense) than sf, shares space in that same volume.
One of the many places one might've read nearly any of these stories previously was in the many anthologies edited by Peter Haining, one of if not the most prolific of British anthologists over the last half-century and a bit more. Haining was particularly fond of theme anthologies, and repeatedly would return to anthologies with the common thread, as with Wolfe's book, of stories that had been adapted for film, or television, or radio, or some combination (I'm not sure if he ever came up with one devoted to those stories solely dramatized in live theater, but I wouldn't be surprised). I certainly read "Spurs" first in one of Haining's books, but not one of the similar anthologies to the Wolfe that are detailed below:

[TM: this volume below notably lists the source stories somewhat annoyingly by the title of the films adapted from them, a habit he would continue to indulge in at times in later volumes:] 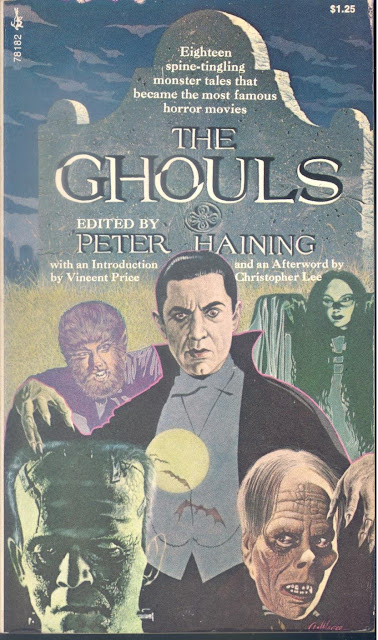 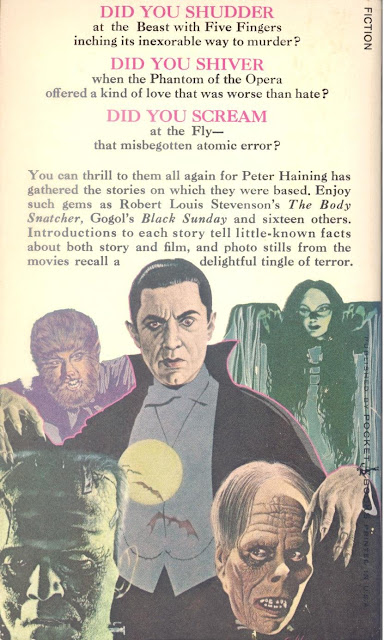 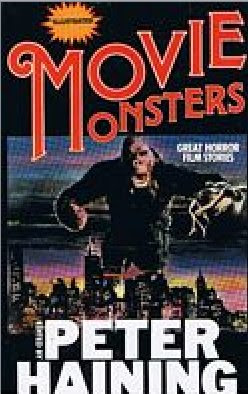 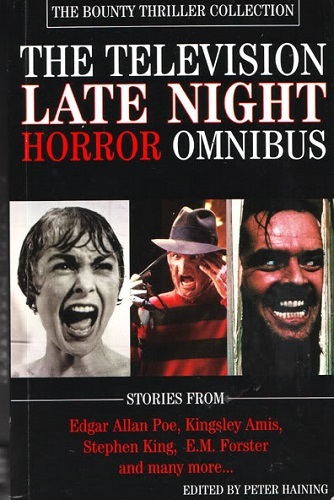 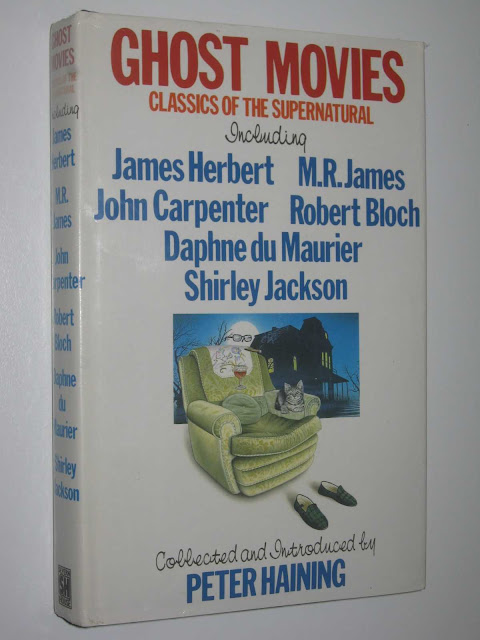 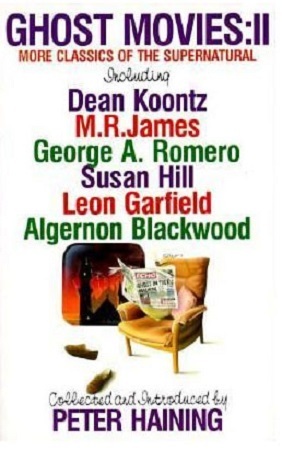 Ghost Movies II: Famous Supernatural Television Programmes ed. Peter Haining (Severn House 0-7278-4966-2, May ’96, £16.99, 242pp, hc, cover by Derek Colligan) Anthology of stories which were the basis or inspiration of many well-known fantasy and horror TV series and films. The cover gives the title as Ghost Movies II: More Classics of the Supernatural.

And while theoretically these two anthologies are science-fictional, there is some overlap (and a few odd inclusions, as the indexers note)--TM: 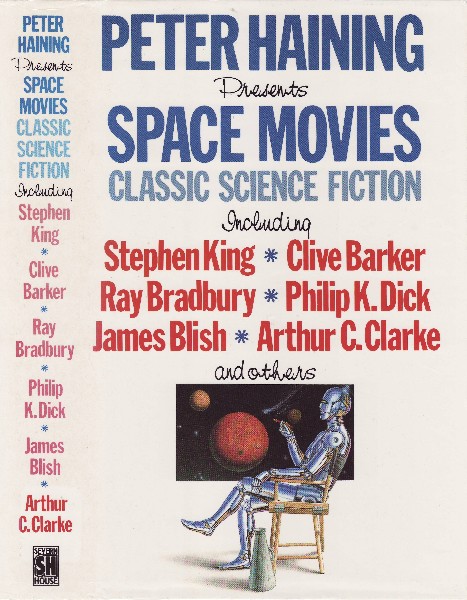 Space Movies: Classic Science Fiction Films ed. Peter Haining (Severn House 0-7278-4790-2, Jun ’95 [Jul ’95], £15.99, 266pp, hc, cover by Derek Colligan) Anthology of ten stories and novel excerpts which lie behind many well-known movies: Heinlein, Bradbury, Von Braun, Moore, Clarke, Dick, King, Barker (not sf), Nolan (a piece taken from the sequel to the filmed book) and a Blish adaptation which has no connection to any of the films. Each piece has a background introduction by Haining. 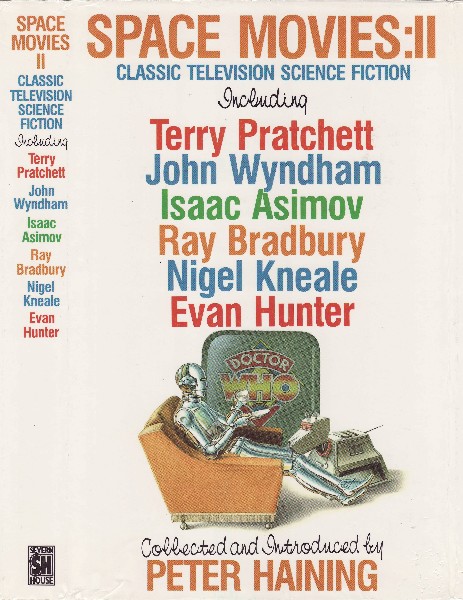 Space Movies II: Famous Science Fiction Television Series ed. Peter Haining (Severn House 0-7278-4897-6, Mar ’96 [Feb ’96], £15.99, 245pp, hc, cover by Derek Collinson) Anthology of ten stories which were used in famous TV SF series, or were written by the authors who inspired the series. [The stories apparently retitled below for the tv series they were adapted for or were a part of or, in the case of the Kneale, were expanded into. TM] 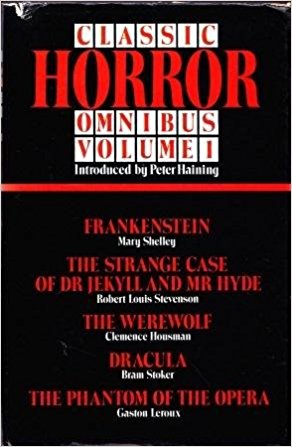 Nice collection of story to screen anthologies. I have "The Ghouls", but have not heard of some of the UK books.

Thanks! At least a few have been released in instant remainder omnibuses in the US...will track down those titles soon.

I own a couple of these anthologies, but now I'll be on the hunt for the others.