FFB: SWORDS AND DEVILTRY by Fritz Leiber (Ace 1970); NIGHTFALL AND OTHER STORIES by Isaac Asimov (Doubleday 1969)

Two books which haven't been Forgotten so much as absorbed into larger editions, which are in print at very least after a fashion, or in the case of the Leiber, are also reprinted in very expensive. lavish collectors' editions over the last couple of years (three Centipede Press editions, ranging in original price from $75-$300).

Swords and Deviltry collects, in terms of narrative or internal chronology, the first three stories of the swordsmen, thieves and mercenaries Fafhrd and the Gray Mouser, the former a tall hulking figure from the barbarian North of the planet Nehwon (which notably is a reversal of "No when", a bit of tribute to Samuel Butler's Erewhon), the latter a short, slight man of great agility and speed, from points southerly; they eventually meet in their world's largest city, Lankhmar. The first novella, "The Snow Women", gives Fafhrd's origin story, as the magical apron-string-bound prince of the Snow Clan finds love with visiting young woman, in with the annual visitation of outlander traders and show people; Fafhrd being a sort of analog of Leiber himself, raised largely by aunts while his parents were touring the country with their Shakespearean troupe. "The Unholy Grail", a novelet written a decade earlier, gives the early years of Mouse, who would become the Mouser, their innings; Harry Fischer, a great friend of Leiber, and direct collaborator on several of the early stories in the F&GM series, was the model for Mouse/the Gray Mouser. And "Ill Met in Lankhmar", a 1970 novella which won both the Hugo and Nebula awards for Leiber (in those years where there was, for a while, no regular award for fantasy fiction), brings the two men and their womenfriends together for the first time...and binds them with even greater tragedy than they faced earlier. The first and third stories had been written in the wake of the rather early death of Leiber's wife, Jonquil, which had sent him into probably his most profound alcoholic tailspin, a recurring problem for Leiber, which he would often use the writing of Fafhrd and Mouser stories to help overcome. Of all the Ace paperback volumes which initially gathered the sword and sorcery fiction of Leiber, this one has always been the dearest to me, even given the relative lack of heft of "The Unholy Grail"--more than made up for by both the novellas...which notably appeared in the same cover-dates for the two most notable English-language fantasy-fiction magazines in 1970, Fantastic and The Magazine of Fantasy and Science Fiction. Most of the other Ace volumes would mix stories of varying quality, from readable at worst to utterly brilliant, but "Ill Met" is one of the best, if not the best, of the stories in the series, and "The Snow Women" is funny and sharply observed, almost as deft in its satire of sexual politics (from an essentially pro-feminist, but not at all obsequiously so, point of view, not unlike his brilliant first novel, Conjure Wife...and incorporating some of the resentment of Leiber would express for the restrictiveness of his upbringing, and its consequences, in other stories, such as "Gonna Roll the Bones").

Swords and Deviltry Fritz Leiber (Ace, May ’70, pb) [Fafhrd and the Gray Mouser]

While Isaac Asimov's collection Nightfall and Other Stories has been out of print under its original title since sometime after the 1991 UK edition from Grafton, though it has been incorporated into The Complete Stories, Volume 1. This was the first of Asimov's collections to be a survey of his work, including stories from nearly every phase of his career up to 1969, as opposed to his earlier collections being essentially My Recent Stories (themed collections devoted to robot stories had also appeared, which were limited surveys, and Asimov's Mysteries was published the year before, likewise intentionally if loosely delimited). For no obvious reason, such key and/or engaging stories from his career as "Green Patches", "Hostess", "What If..." and "Unto the Fourth Generation" had not been included in previous volumes; one suspects "Nightfall" previously had been overlooked in part because while it was his first story to gain widespread attention, it was the work of a 19yo, and reads like such, and apparently no few people would approach Asimov in later years and inform him that it was Still the best thing he ever wrote, not the kindest thing to say to a writer...and a plaudit that several of the stories here deserve rather more, even if there's no lack of relatively minor, if amiable, joke stories here, as well (such as "Insert Knob A in Hole B" or "What Is This Thing Called Love?"). But what made the collection particularly dear to me, aside from the better stories and general sense of fun among most of the minor ones, were the chatty story introductions that were first offered in Asimov's Mysteries and here among Asimov's collections, after the first, 1962, volume of The Hugo Winners that Asimov presented rather than actually edited. That previous collections had left out the fantasy stories, for the most part, didn't hurt my feelings as I read this one before the earlier volumes (and just before Asimov's Mysteries). 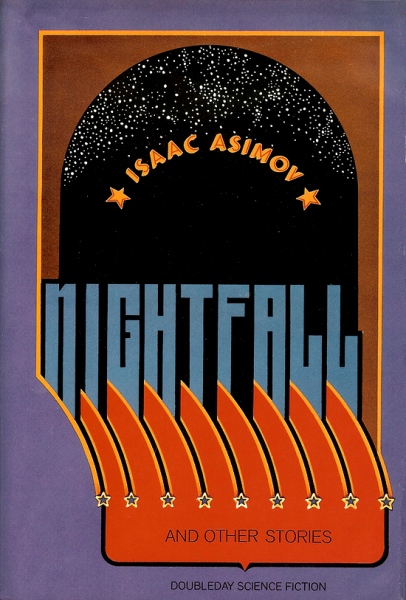 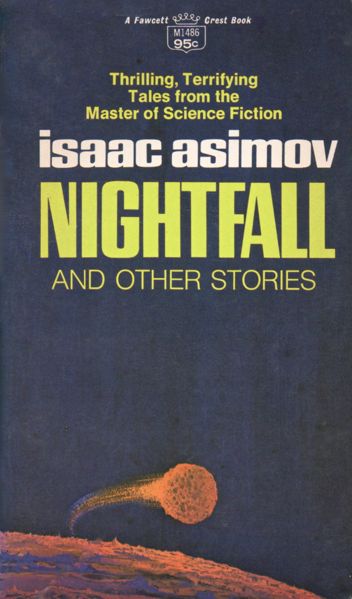 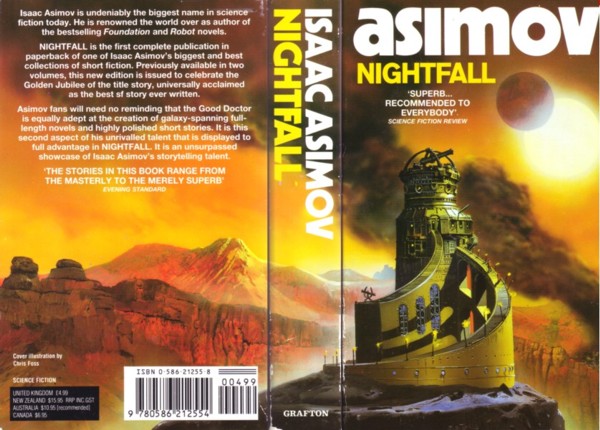 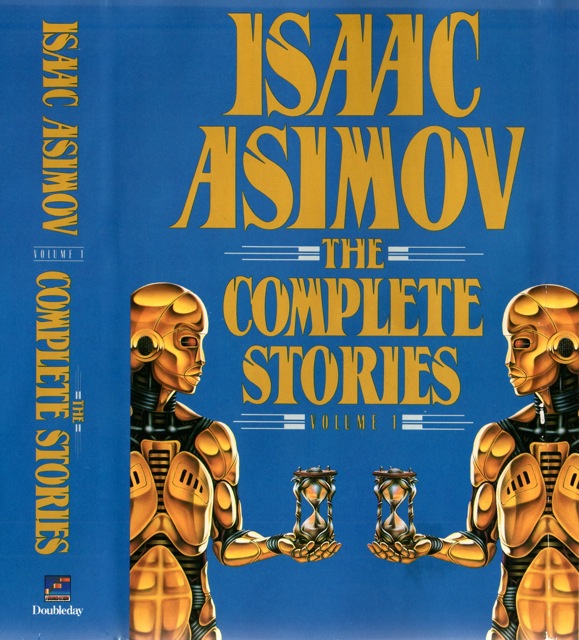 I have that first edition paperback, as well as the omnibus, but since I several other paperback F&GM paperbacks, I chose not to shell out big bucks for the more recent collections. Nice review.

Two classic works! I read all the Fafhrd And The Gray Mouser stories. Wonderful stuff! I read Asimov avidly in the Sixties, but his work in the Seventies held less appeal to me.

Thanks, gentlemen. Yes, I have to argue with myself before making any purchase at the moment, and while I'd like the supplementary materials, I'd also like them to also be available to people who can't drop $75 on a single book. Ah, well.

Even in the '70s, some of his stories (up to the "The Bicentennial Man" and some of the other shorter works) were worthwhile, even if the novels which come to mind, not so much. The autobiographies were good, if seemingly a bit more revealing in some ways than I think he realized, at least about his family's dynamics. Or so I hope. And the pop-science work and many of the anthologies were definitely good or better.

You know, despite all the talent at work on these books' covers, the only ones above I'm fully satisfied with are the Mignola cover for the White Wolf omnibus, and the Paul Lehr and good typography balance on the Fawcett paperback for the Asimov collection. Even the Jones (first edition and, reframed, subsequent Ace editions, and the 1970 FANTASTIC) and Barlowe (Gregg Press) covers, which are handsome pieces of illustration, don't make the most effective covers to me...though the version of the Barlowe used on the Berkley edition of NIGHTS BLACK AGENTS is much better thus. Even the handsome UK NIGHTFALL cover isn't actually depicting what's about to occur correctly, for what it's worth. And the Bonestell on the F&SF is typically handsome, but probably on this issue as the result of having to rush scheduling of the Leiber novella to accommodate the book's publication date...no time to commission a painting for the story. (Or in consideration of the truism that sf covers, or at least astronomical ones, would outsell fantasy covers on F&SF...on FANTASTIC, the only circulation spikes were apparently driven by advertising the latter-day Conan stories that magazine would run in the '70s).

Todd, I must have been twelve or thirteen when I first encountered Leiber's work via the Fafhrd/Gray Mouser story "The Bleak Shore." I had been an active reader but this was something far beyond anything I had previously experienced. (The next time I was so wowed by an author was when I read Avram Davidson's "The Necessity of His Condition.") "The Bleak Shore" was not Leiber's best story but it has remained with me for half a century and was one of my main gateways to adult literature.

Which stories do you credit to Fischer besides the abortive initial draft of "The Lords of Quarmall", Todd? (And his much later solo story, "The Childhood and Youth of the Grey Mouser".)

Anyway, I agree -- "Ill Met in Lankhmar" is the best of all the Lankhmar stories.

I do remember that first edition of NIGHTFALL AND OTHER STORIES. One of the earlier adult SF books I read, borrowed from Nichols Library in Naperville, IL. It's actually got a lot of pretty strong stories besides "Nightfall" -- "Green Patches", "The C-Chute", "Breeds There a Man?". And I miss the canonical collections -- THE MARTIAN WAY, NINE TOMORROWS, EARTH IS ROOM ENOUGH. That's how the stories should be organized, in my mind! (I, ROBOT as well, of course, and I suppose too the first three FOUNDATION books.)

Jerry--I'd read something by Leiber, enough to know his name, when I picked up the first back issue I'd read of F&SF and found his next F&GM story after "Ill-Met in Lankhmar", "The Price of Pain-Ease" and was hooked. I would've been just 13yo, myself, the Golden Age by some reckoning (some insist twelve). Did you read "The Bleak Shore" in D. R. Bensen's THE UNKNONW, perhaps?

I'm not the one to credit anything to Fischer vs. Leiber, Rich...Leiber himself noted somewhere that, aside from the devising together the background and circumstances of the two characters, that some segment of "Adept's Gambit" (if I'm not mistaken) was also Fischer's work. Though I'd like to see or hear (it might've been a recording) that citation again, I'll admit.

Nearly every non-joke story in the Asimov book is, frankly, stronger than "Nightfall"...it's not the monument that it's often credited with being...and I'd agree, the original collections not being available is a shame. Though my point was, it's odd that these stories we cite weren't included in the These Are My Recent Stories collections we cite, along with their contemporaries. I can see why, with "Nightfall", but it's less clear to me when not "Hostess" or "C-Chute"...perhaps they were still in print in anthologies, but that still seems an odd choice on Asimov's part, or Doubleday's. And while the fixup that is THE FOUNDATION TRILOGY can be considered a story collection, I'd say the robot stories books (including THE REST OF THE ROBOTS and eventual later additions) are the only "real" if thematically limited "survey" books Asimov published before NAOS. At least they finally picked up that money on the table.