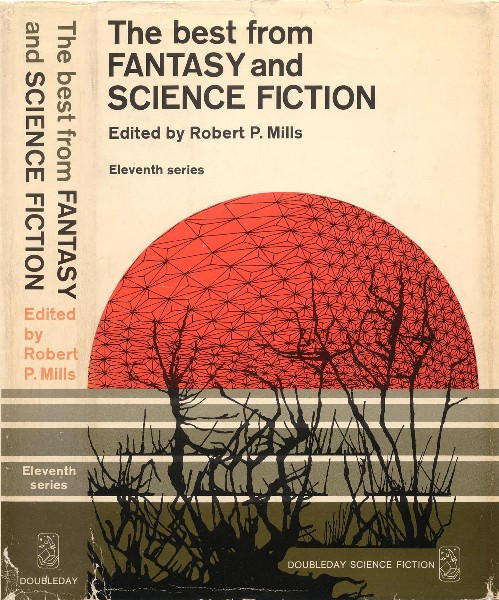 Two weeks ago, I reviewed Robert Mills's first of three annual best-of The Magazine of Fantasy and Science Fiction volumes, from his years of editorship of the magazine, whose name is usually abbreviated F&SF, and one of two Leo Margulies anthologies taken mostly from Dorothy McIlwraith's term as editor of Weird Tales (WT), including its revivals easily the next longest-running and certainly a similarly major influence on fantasy and horror (and to some extent suspense and science fiction) writing over the decades. This time, Mills's third and last annual volume, which managed to get the least ugly cover from the nonchalant Doubleday art department I recall among the whole series' run, by the talented but sparsely-employed Roger Zimmerman, and the less-elegantly, but punningly, titled other Margulies volume from Pyramid. 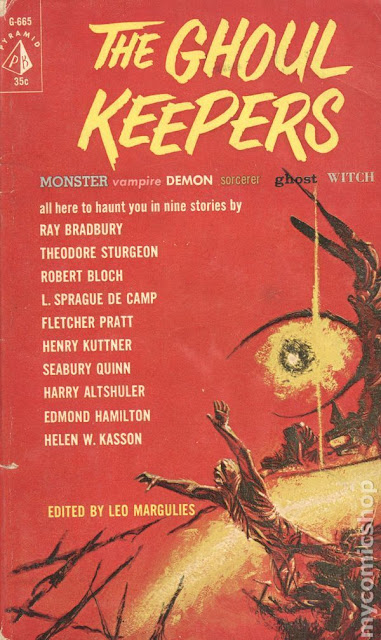 The lineup in the Margulies volume is perhaps just slightly less impressive than in the previous one, but only just so; the lineup in the Mills if anything managing to be slightly better, if, again, only by some intangible fraction. And Ace Books even let the poetry and Mills's headnotes actually be reprinted in full in their reprint of this volume, apparently...only three poems this time, the Walt Whitman classic in lieu of an editorial introduction. (In the UK, Panther was less generous in their paperback reprint, excising the Reeves poetry and the stories by Evelyn E. Smith, John Anthony West and [Ms.] Jody Scott, the latter two the younger contributors to the book; the West had been apparently first published in the UK in a 1961 collection of his short stories, Call Out the Malicia, which was the source of West's three F&SF stories before Dutton reprinted his collection in the US in 1963.) The least well-known writers in the WT book are Harry Altschuler, later the literary agent who made such a famously bad deal for Robert Bloch with the purchasers of dramatic rights to Psycho for Alfred Hitchcock's production company (and was fired by Bloch soon after), and Helen W.(einbaum) Kasson, the sister of the short-lived but highly influential sf and fantasy writer Stanley G. Weinbaum, one of small cadre of siblings of more famous writers who made their own mark, such as also Mary Pangborn or to some extent Jane Aiken Hodge (one could probably also, perhaps unfairly as with Hodge, cite Hugh and Robert Benson, E. F. Benson's bothers, but that's more like a Bronte Sisters situation). 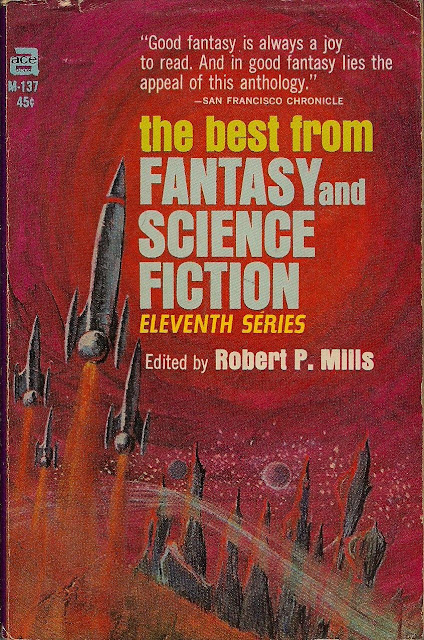 The most famous stories in each volume: an easy choice for the Mills, as "Harrison Bergeron" has almost certainly passed "Report on the Barnhouse Effect" as Kurt Vonnegut's single most famous and widely-reprinted story, and this account of a human world where all people are artificially restrained if they demonstrate any greater talent or attractiveness than anyone else is the close correspondent in familiarity to Daniel Keyes's "Flowers for Algernon" in Mills's first volume, the Ninth. In the Margulies, it's a bit closer, but the Robert Bloch lead-off story "The Sorcerer's Apprentice" is probably the champion by a hair, and it's a clever and very hardboiled sort of suspense story, not supernatural horror except from the point of view of its benighted protagonist, who thinks he's been rescued from his homeless, abandoned state by an angelic woman and a generous but Satanic man, and how things go very wrong for everyone involved. It's appeared in a large number of Bloch's own collections, and in at least four anthologies which have seen multiple editions, including this one.  The lead story in the Mills is Avram Davidson's very funny "The Sources of the Nile", in which a busy but underpaid writer (not a situation unfamiliar to Davidson himself) stumbles across a family who anticipate trends to a fabulous degree, and almost grabs a brass ring of fame and fortune with them...but an underestimated villain manages to snatch them away...and marry the writer's neglected womanfriend, to boot. Plot is not the strong point in this story, as with many of Davidson's best, so much as often hilarious, acutely observed detail and anecdote, obscure references deftly woven in...and, as with the Bloch story, a beautiful blond woman as the protagonist's obsession, though in the Davidson story understood all too well by her would-be swain as opposed to misunderstood almost completely. 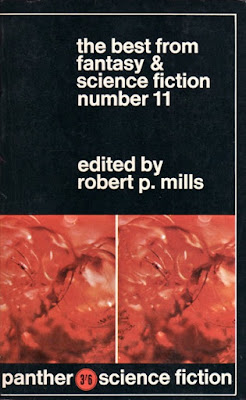 The remarkable balance of the contributors to both books deserves some quick annotation, at least: in the F&SF book, Jay Williams was best known then and probably remains so for his young-readers' novels about Danny Dunn; Evelyn Smith was a contributor to most of the fantasy magazines, and number of sf magazines particularly in the 1950s, and particularly to, initially, Anthony Boucher's F&SF before Mills. Isaac Asimov, Poul Anderson, Gordon R. Dickson and Clifford D. Simak need little introduction to most readers of fiction from sf and fantasy magazines; Anderson and Dickson notably collaborated early on (particularly on the humorous "Hoka" stories), and Simak was one of the primary models that Asimov patterned his fiction after, in the latter's early career. "Cordwainer Smith" was the pseudonym Paul Linebarger, and eventually his wife Genevieve Linebarger as well if mostly in collaboration, used for their speculative fiction writing, most of it within a series called the "Instrumentality of Mankind". Charles G. Finney, best remembered for his novel The Circus of Dr. Lao, which has been influential on a number of writers, ranging from Ray Bradbury through Jonathan Lethem (Pyramid editor D. R. Bensen prominently blurbed their edition of Finney's The Ghosts of Manacle as "The damnedest book you ever read"); Jody Scott, whose first story this was, went on to write at least four novels, with one published only recently, a decade after her death, as a part of a loose, bitterly satirical series of science-fantasies, and one, a recent-past historical novel set during the Free Speech Movement activism at UC Berkeley, published only so far as an edited novella in an issue of Escapade magazine. John Anthony West, who died in February, and devoted much of his later life to speculative Egyptology, was one of several writers over the decades mostly to publish a few stories over a stretch of years mostly in F&SF, albeit all his F&SF stories were reprints from a UK collection and his three later short fictions in the field were sold to Damon Knight, and to Ben Bova at Omni; Rosser Reeves was one of the more important innovators in advertising in the '60s and '70s, who contributed three poems to F&SF at the turn of the '60s, and one short story to the last, April 1960, issue of Robert Lowndes's Future Science Fiction. And this John Berry, as opposed to the large handful of other literary John Berrys who lived and published through the latter half of the 20th Century, is perhaps best-known for his Macmillan Prize-winning first and only novel, Krishna Fluting (1959).

While in the WT volume, along with Bloch, stalwarts of the Dorothy McIlwraith years of the magazine Theodore Sturgeon and Ray Bradbury have stories in, as they did in the previous one, Sturgeon's the one sf story in the book; this was usually Edmond Hamilton's bailiwick in WT, as the primary contributor, along with (to some extent) H. P. Lovecraft, of what earlier editor Farnsworth Wright liked to cal the "weird-scientific" stories in the magazine; his story here is more in dark fantasy mode. One of the Gavagan's Bar club/pub-stories of L. Sprague de Camp and Fletcher Pratt, accomplished fantasists and historians both, is included, as well as one of the Jules de Grandin psychic investigator stories by Seabury Quinn, throughout the pulp years apparently the most popular feature of Weird Tales with readers. Henry Kuttner is represented, and represents the heroic fantasy tradition in the magazine, with one of his Elak of Atlantis stories, not quite as famous as his eventual wife Catherine L. Moore's "Jirel of Joiry" stories, nor Robert E. Howard's several series featuring Conan, or other adventurers, but still notable. Weinbaum Kasson and, perhaps oddly, Altshuler (with his only story in the fantastic press, apparently, perhaps his only published story) round out the book.  Thus, The Ghoul Keepers is perhaps a shade less impressive than its predecessor, as noted before (though the Bloch story here is certainly a better one), the 11th Best from F&SF at least as good as the 9th (and easier to find in an unabridged edition). 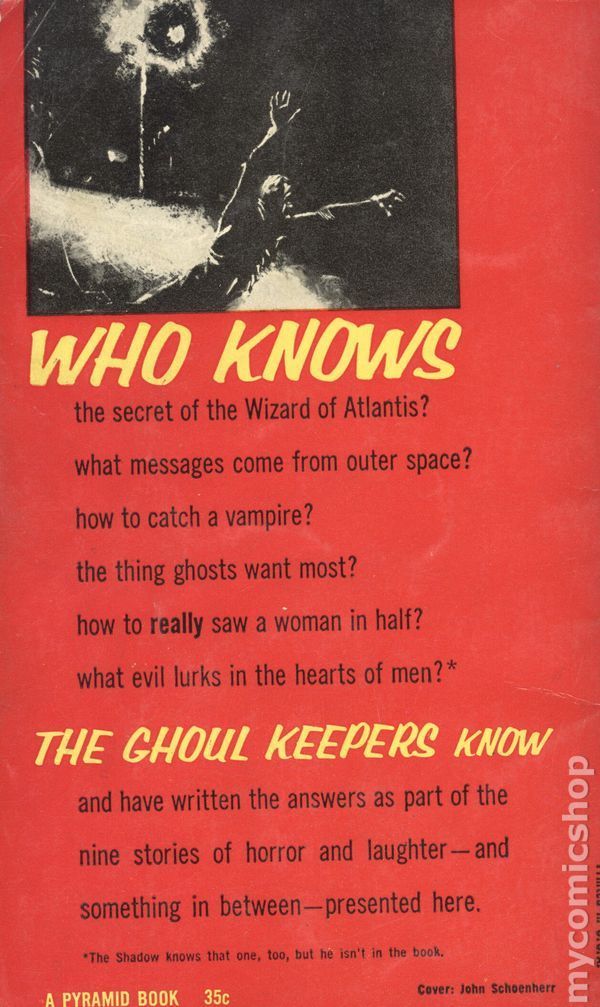 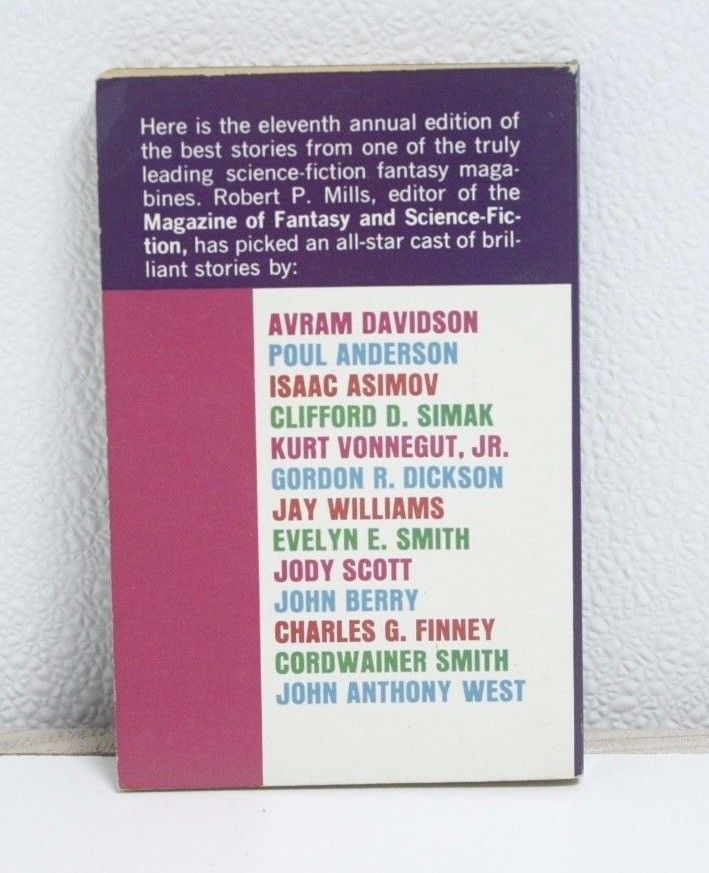 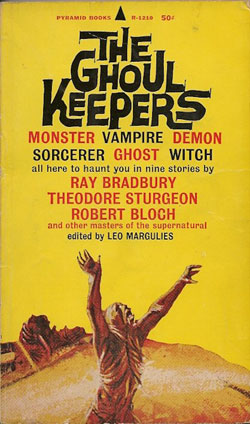 I kick myself for not being more disciplined about buying the Robert Mills and Leo Margulies anthologies. I have some, but not all of them. At one time, they were fairly available...and cheap. Now, not so much.

Well, they're still out there, though of course picking them up online has its drawbacks...my copy of the Mills paperback was described as in Very Good condition and overcharged for, when it was a battered reading copy. Convention hucksters and others still can provide value for money.

I do think that's a bit unfair to Jane Aiken Hodge -- sure, she's a lesser writer than her sister Joan, but she had a pretty significant career, mainly romance and romantic suspense -- over thirty novels, plus books on Jane Austen and Georgette Heyer. Lived to be 92 and then committed suicide.

As you may have heard me say before, I think "The Sources of the Nile" one of the greatest shorter works in SF history.

I did not remember, if I've come across, your assessment of "The Sources of the Nile" but it is a pretty damned archetypal Davidson story. Which would certainly qualify it for your plaudit.

Oh, I don't mean to diminish the careers of any of the siblings...they all did work, at least some work, as good as at least much of the work of their more famous sisters and brothers...but they simply never have reached the same level of fame or widespread appreciation. True, I'd say, of all the cited examples. Robert Bausch, not sollely Richard Bausch's brother, is another.

I've read a good deal of Cordwainer Smith (Paul Linebarger), but am not familiar with, or have forgotten, "Alpha Ralpha Boulevard". Hmm.

That is the one Smith story Frederik Pohl cites in his memoir by title as one which Got Away because of Smith's agent not wanting to send two client manuscripts to the same editor simultaneously. Pohl goes on to note he made sure the agent changed that policy. I guess the other Smith stories that went to Cele Goldsmith's magazines or F&SF were passed on by Pohl...