some SF and political magazines, August 1964 (or as close as can be found)

If two queries amount to clamor (we have low thresholds here in blogland), a groundswell of Rick and Paul made me aware that though I thought I had done an August 1964 gallery of science fiction magazines at some point (as opposed to their compatriots in English devoted to fantasy and frequently also sf), as it turns out, I hadn't. And, as there's a remarkable lack of photos online of the summer 1964 issues of the political magazines that meant the most to me as I would read them later, or whose legacy would be important to me, here are some images from as close as I can get so far (I did include the anarchist/libertarian socialist  journal Our Generation, which in 1964 was still Our Generation Against Nuclear War, in with the general-interest intellectual magazines and the politically-savvy satire magazines last week...in part because it has a fine online archive)(and when a magazine, like Dissent, apparently skipped most of 1964 presumably out of budget or staff infighting woes, what can one do? The 1964 Anarchy below, by the way, is the offshoot from the UK anarchist newspaper Freedom, rather than an improbably early issue of the 1980s heavily Situationist/Deep Ecologist Anarchy: The Journal of Desire Armed)(nobody seems to archive/web-write much about The Progressive in the 1960s...).

If there's a magazine among sf magazines in English in 1964 that was providing the most bang for the pence without much attention given, it was probably the UK edition of Venture Science Fiction, which flourished briefly for several years after the similarly impressive, shortlived US original and in the mid-'60s was the de facto UK edition of The Magazine of Fantasy and Science Fiction. Perhaps an unfair comparison, as it was able to draw on the contents of both the US Venture and F&SF ranging back a number of years, cherry-picking as they might (and this Venture did run a scrap of fantasy...but, then, so did all the other sf magazines below): 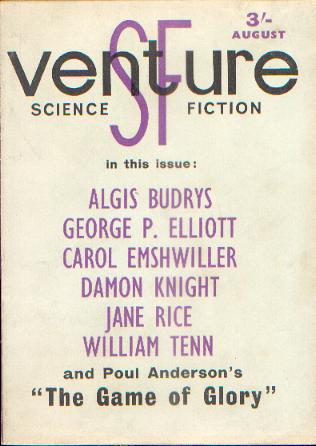 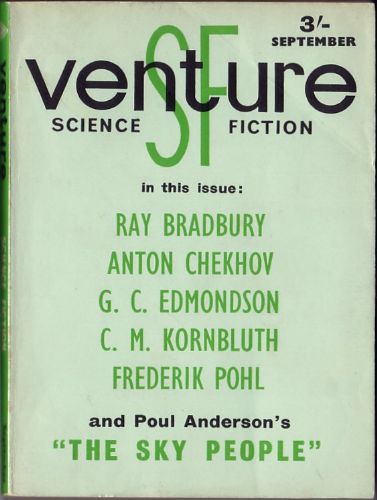 And we can note the presence of one of the recently late Carol Emshwiller's stories. "Pelt", along with her nearly contemporaneous "Hunting Machine", is and are strong indictments of the ethics and cruelty of hunting for sport, at very least, and among her many vivid short stories.

And to run through the rest of the field almost alphabetically and definitely by how long they had run by 1964:

Amazing, during all its years running alongside Fantastic and to some extent Fantastic Adventures, was almost always not quite as good as its stablemate, in part because there usually was more magazine competition for sf stories than the fantasy fiction the companion was more open  to...but the August issue has a hell of a lineup, aside from the odd choices of Young and Rohrer, the latter about as new on the scene as Le Guin and Gottlieb, for the cover...and the September contributors are as impressive. 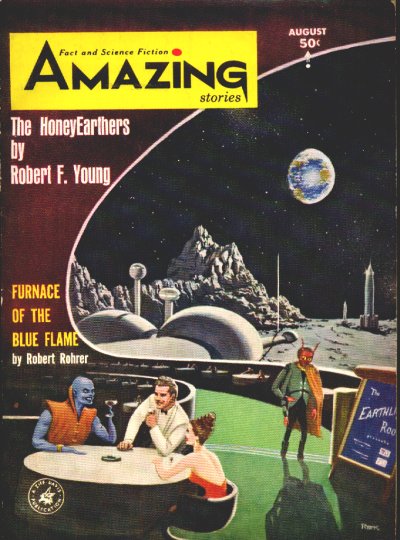 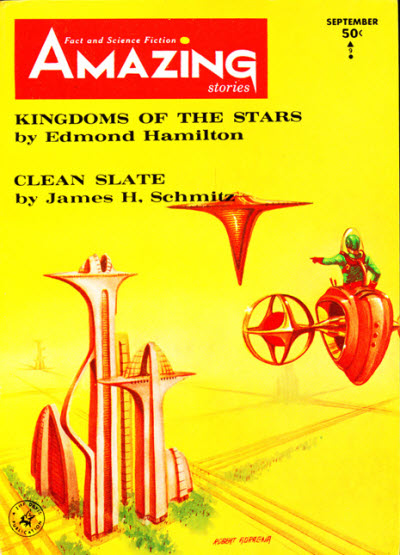 And another quick memorial, for the recently late George Locke.

Pretty good issues (at least the August, which I've read, but the September looks good) of the large-format Analog, albeit light on fiction...but if you're going to run only three pieces of fiction in an issue, having two of them be by Mack Reynolds and Damon Knight is a good idea (Knight's notable story "Semper Fi", which Campbell changed the title of, and Knight changed it back when it was reprinted). Haven't read the serial...I've only owned the August issue, and the author seems typical of the Analog writer who hasn't published much outside the magazine. 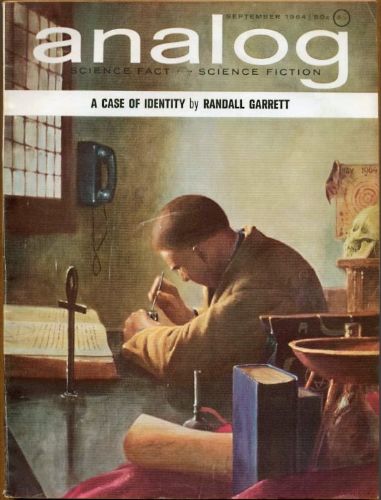 Mass-market paperback-sized issues of New Worlds, early in the editorship of Michael Moorcock, and the July/August issue featuring the most famous story of his ex, Hilary Bailey, a brilliant writer. Eclectic mixes of writers...for example, few tend to refer to Joseph Green as a "New Wave" writer, but he's right at home here...and E. C. Tubb in the next issue...of course, the big arguments came later. 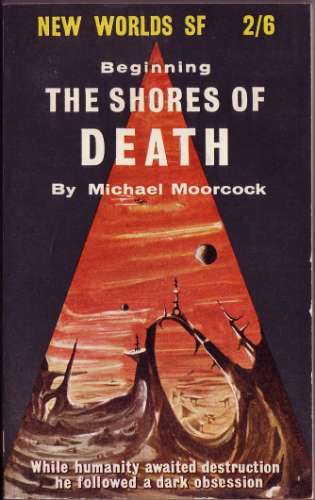 Frederik Pohl was probably at his editorial height at this point, as he as getting Galaxy and If about where he wanted them, except not monthly, and was given Worlds of Tomorrow as a sop for not being allowed to up the frequency of the other magazines...not what he was hoping for, but WoT became a place for long novellas and other items that literally or thematically wouldn't fit in the other magazines (though If was saddled with the atrocious Heinlein novel, and had a sudden switch to monthly for the August issue, then bimonthly again for September-October, then monthly in November for several years--publishers Robert Guinn and Sol Cohen were nervous); the only issues of The Best Science Fiction magazines were a bit of a trial balloon...the Best from WoT item probably not released till year's end, but this isn't clearly documented (the FictionMags Index suspects it was intended for 1965 release)...probably the best cover designs of this set, save the August If and the utterly functional Best Science Fictions. 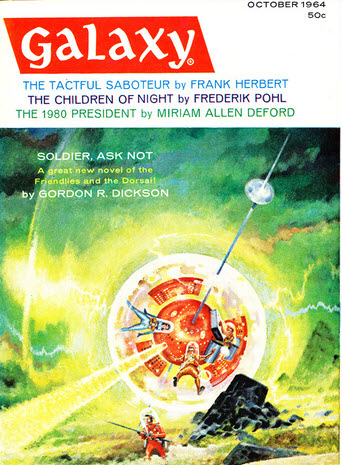 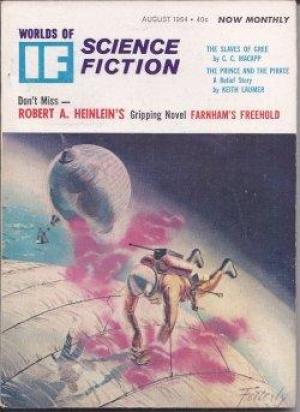 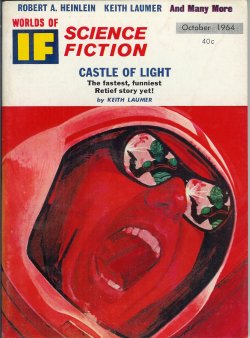 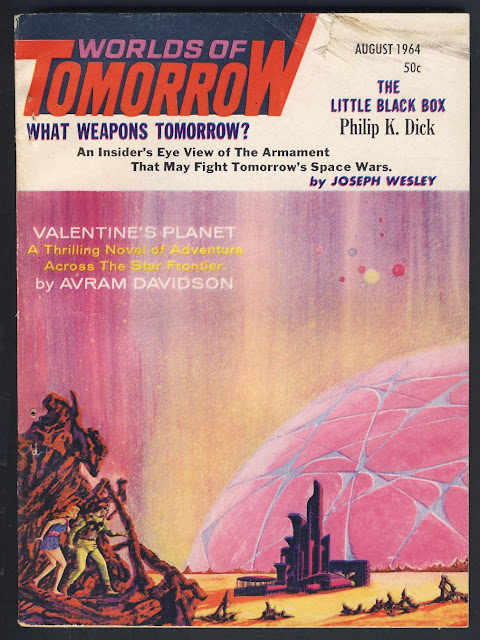 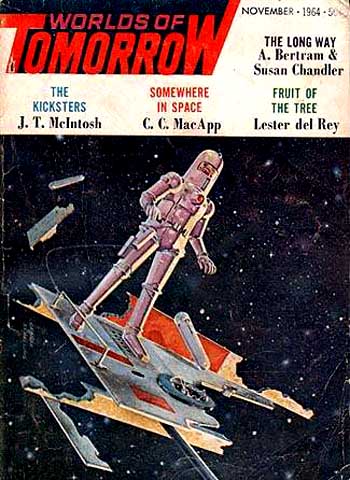 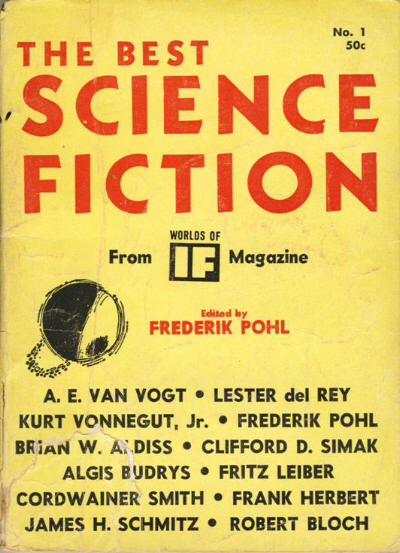 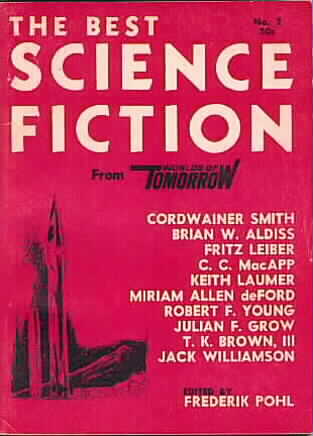 And, for the hell of it, here's the 1964 Hugo Award balloting results order for the professional magazines in sf and fantasy, World SF Convention membership tending to favor sf but not always, and demonstrating the dangers, for Cele Goldsmith, John Carnell and Frederik Pohl, at least, of having to run against yourself... 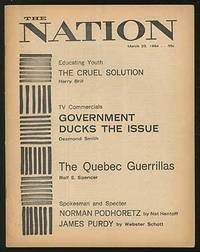 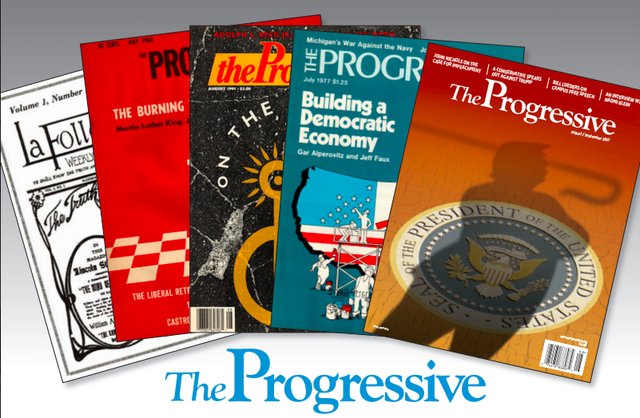 l
The second example from the left above dates from 1965. 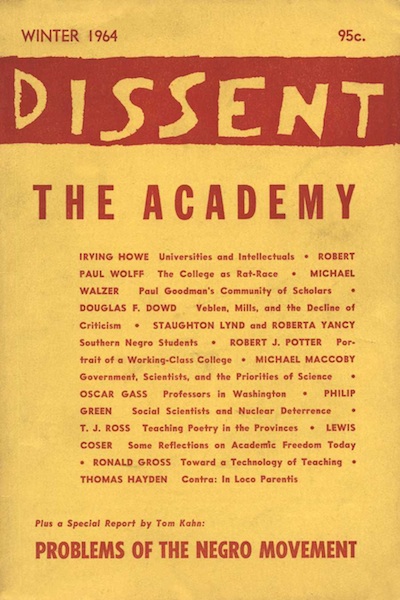 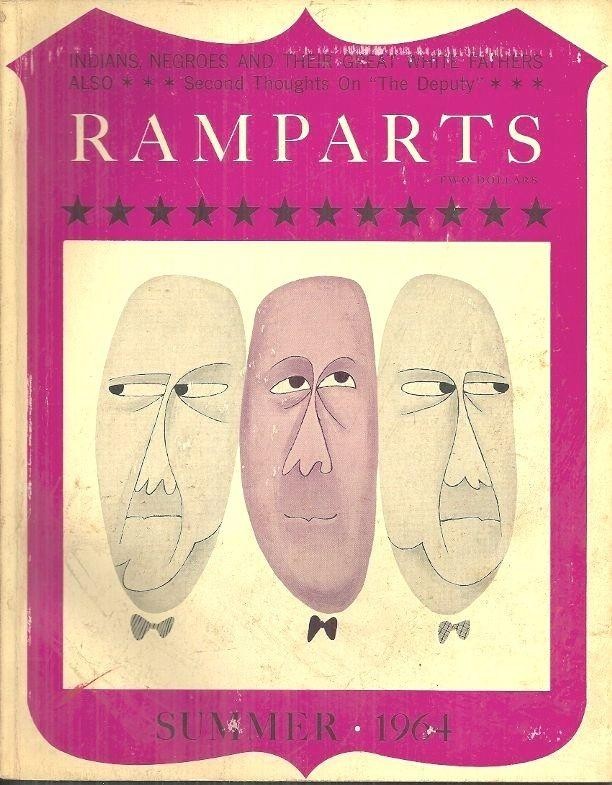 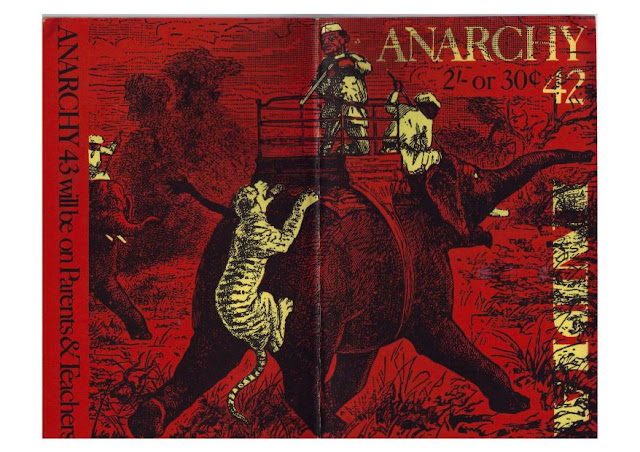 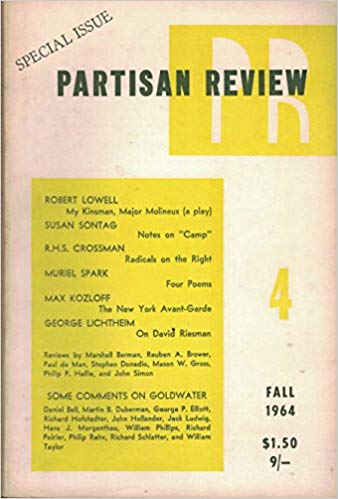 A rather impressive issue, beyond the most famous contribution, Susan Sontag's "Notes on 'Camp'" 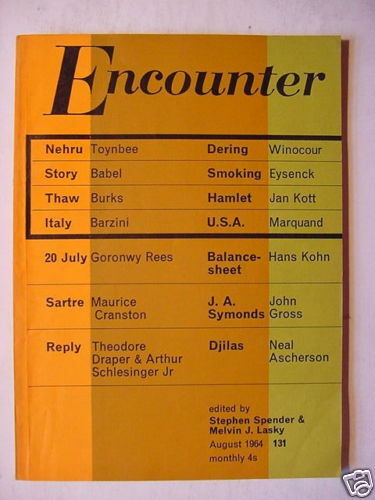 Some interesting covers there.
A couple of random points/questions:
1. I only recently learned that Pohl chopped the first 10,000 words or so off of Heinlein’s novel for the serial version. I’m surprised that he got away with that (I seem to remember that REH was pretty splenetic about Gold’s rewrite of The Puppet Masters).
2. Is the Davidson novella in WOT any good—that looks like a promising issue?

!. I seem to recall Pohl mentioning in print somewhere, perhaps in YESTERDAY'S TOMORROWS, Heinlein grumbling fiercely about this, but it not being a dealbreaker for the future sale of THE MOON IS A HARSH MISTRESS to Pohl for serialization not long after. Perhaps even RAH realized that FARNHAM'S FREEHOLD was not one of his better works...to say the least.

2. I don't know yet, even as I had pencilled it in for one of my more improbable mixes of fiction magazines for FFB/M review, one which Bill Crider was kind enough to mention he was looking forward to. (Along with a late NEW WORLD WRITING and an early ELLERY QUEEN'S ANTHOLOGY issues. Novellas and near-contemporaneity were the hooks, as I recall, along with notable contributors.) I still need to read it...it's a shorter form of what was paperbacked as MUTINY IN SPACE and the editing, presumably by Davidson as much as by Pohl, might well've marked an improvement. With the lineup of writers, it is indeed a promising-looking issue.

Once again I'm blown away by your post! I actually read all those GALAXY, WORLDS OF TOMORROW, and AMAZING SF magazines. I subscribed to them in the Sixties. I let my subscriptions lapse in the early Seventies although I still bought them at the newsstand.

Thanks, George! My sadness at seeing how the Post Office (and, I learned later, the fulfillments houses/printers and binders that mailed them) could treat my precious fiction magazines led me early on to preferring to pick them up at newsstands as well, though I've also subscribed (and occasionally some magazines, such as THE MAGAZINE OF FANTASY AND SCIENCE FICTION, offered small-fee envelope services).

And, George, you have to put a link to your customized WordPress blog in your Blogspot account, so people can find you: http://georgekelley.org/

I had a look at both versions of the Davidson FWIW. The novella is 39,000 words, the novel 46,000. I must ask Henry Wessels if he knows if the novella is an abridgement (I assume so).

Widely accepted/cited as such. Doubt either title is Davidson's original.

Well, I see that ISFDB notes that this cover story in an August 1964 magazine issue, presumably on the stands in late June at latest, was "expanded" for publication as a September 1964 release as MUTINY IN SPACE. As this is an unlikely timeline even for paperback originals even in those years, even from as writer-friendly an outfit as Pyramid as edited by D. R. Bensen, I will suggest this is why I have this impression. Thanks, though. I see I am relying on probability-driven memory rather than documentation:
http://www.isfdb.org/cgi-bin/title.cgi?11985

That and Michael Swanwick having a similar suspicion here:
https://www.michaelswanwick.com/nonfic/mutiny.html

But there are worse things to do than asking Wessells if he has anything to hand to tell him which might've been finished first.

Yeah, I noticed that ISFDB comment as well but they never quote their sources. On one submission I made I had a source removed and asked why. Answer came there none.
Thanks for the Swanwick link.