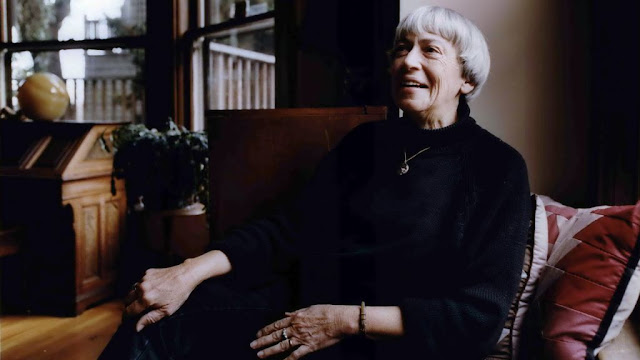 A solid, if unsurprising, documentary on her life and career, as compacted into 52 minutes (cut down from the 65-minute theatrical cut seen in limited theatrical and festival release) and including some cute animation based on cover illustrations of various UKL works (elsewhere, Eli Bishop notes that the longer-form animations that accompany some of the readings are more impressive, and I'd agree).

Major problem: most of the people talking about Le Guin are good if "safe" examples of those who came along in the next generation or so. Samuel Delany is an exception, as is Margaret Atwood (both also "safe"), and the others getting a fair amount of screen time are David Mitchell (the SF writer rather than the actor/comedian), Neil Gaiman, China Miéville, Theodora Goss, Annalee Newitz and, in one bit, Vonda McIntyre (also, editor Adrienne Maree Brown and biographer Julie Phillips, who wrote the essay at the second PBS link below and is working on a book-length Le Guin biography, following among other work her Alice Sheldon/"James Tiptree, Jr." volume). Considering when most of this was shot, actually talking to more direct peers in terms of when and how they came into the various fields they all worked in, such as Kate Wilhelm, Kit Reed and Carol Emshwiller, assuming they were willing and able at the time, would've been useful. Joanna Russ and her reaction to The Left Hand of Darkness is discussed. We do get to see some high school kids wrestling with 'The Ones Who Walk Away from Omelas"...

Niggles in comparison: Le Guin refers to Cele Goldsmith Lalli's Fantastic (Le Guin's first receptive editor and market) as a pulp...and is not quoted ever mentioning CGL's name; Donald Wollheim, Le Guin's first book editor, in comparison, gets a photo. Le Guin is usually careful to refer to sf and fantasy when referring to both, but others are less conscientious, such as the promo material just as often labeling A Wizard of Earthsea sf.
Le Guin's mother given a bit of short shrift in companion to her father.

You could do worse for an hour. Perhaps amusingly, one of the excisions in the PBS version is the discussion of The Lathe of Heaven, which was adapted into a free-standing telefilm for PBS which has been one of the most popular of such items offered by the network. (The same production team did Lathe as also did the similarly interesting Kurt Vonnegut adaptation/survey drama "Between Time and Timbuktu" for NET Playhouse and the misfired adaptation of John Varley's "Overdrawn at the Memory Bank" for American Playhouse, most easily visible in the Mystery Science Theater 3000 "annotated" version.)(The PBS telefilm should definitely not be confused with the poor later theatrical release, the article-free Lathe of Heaven.)