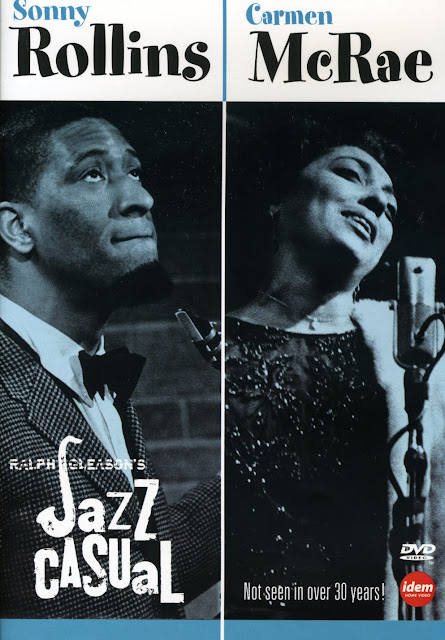 
The Nat King Cole Show (NBC 1956)(famously unable to get consistent national sponsorship, so NBC ran it in essence to sell Cole's records...and because they should)
with the Oscar Peterson Trio

"The Future of Jazz"


Playboy After Dark: two episodes of the sequel series (syndicated 1969)

Wow, so many then. I hadn't realized. There is nothing like these now, and jazz so much less prominent.

They tend to migrate onto the web now, but there has been the occasional notable series on broadcast, such as the public-broadcasting syndicated series LEGENDS OF JAZZ with Ramsey Lewis...wow a decade back, now, and back in the 1990s, NBC syndication's SUNDAY NIGHT/NIGHT MUSIC and Ben Sidran's VH1 series NEW VISIONS were notable, as was FROM JUMP STREET with Oscar Brown in the '70s. And all of them better at what they did than the Ken Burns JAZZ series was at what it tried to do, and failed so badly.

When BET on Jazz (now Centric) and WorldNet (now Voice of America Television) were bestriding the coaxial, JAZZ ALLEY TV was often seen, and occasionally would get some clearance elsewhere, too.

Sadly, jazz has only sporadically been treated well on television, with the likes of CBS SUNDAY MORNING and long-gone OMNIBUS being rather good sources for the music among other things, when they got to it...

Thanks for these clips. The Playboy Penthouse now strikes me as sort of dated and stiff. My favorites are the John Coltrane and Jimmy Smith segments.

Hefner was always stiff on camera, though a little less so by the time of AFTER DARK. I imagine he was always happy to be stiff when he dated. You're quite welcome, Walker! Thanks for commenting.

Managed to leave out STARS OF JAZZ, hosted by Bobby Troup. Ran for several years on KABC before going national in 1958 (only) on the network.