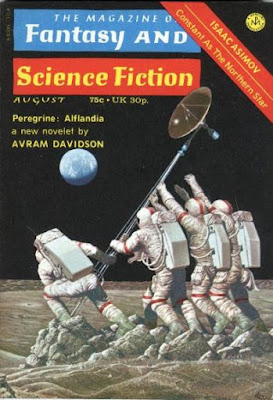 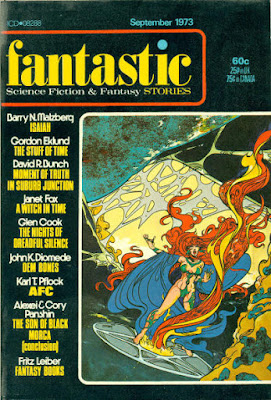 Three issues from the shank of each magazine's run under these editors...of course, editor (and eventual tv producer) Gerard F. "Gerry" Conway wouldn't get too much chance to do more with his prose magazine than this second issue of  The Haunt of Horror, which would be folded before the prepared third issue could be printed (Marvel soon offered a large-format black and white comic book with that title, to join a series they'd already started and advertise in the Haunt digest issues). Rather sobering to realize that of these three magazines, Haunt almost certainly had the largest budget...while not a lavish one by any means...contemporary issues of Analog (from Conde Nast) and Vertex (from Mankind Publishing, also publishing slick magazines. if lower-budget ones) and even the slowly cheapening Galaxy/If group of magazines at paperback publisher UPD were somewhat more impressively produced than any of these three, as the two more durable magazines were already, or about to become, literal cottage industry, put together over home-office tables. 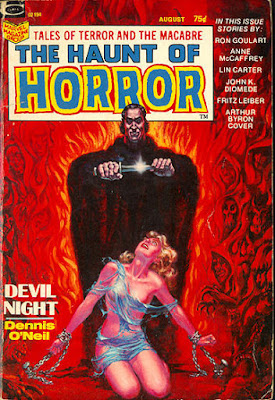 Though the fiction they were publishing was about as good as that in any other fiction magazine in 1973.  Of course, when we look at the more talented contributors to these issues, that isn't too surprising...including knowing that "John K. Diomede" in two of the issues is a pseudonym for George Alec Effinger. The F&SF leads off with "Peregrine: Alflandia" as a fragment, not quite as free-standing as advertised by Edward Ferman's blurb, of the Secundis sequel to Peregrine: Primus by Avram Davidson. Essentially as the first chapter, it's a great teaser, even if Davidson was having so much fun with his more rustic characters' accents and idiosyncratic syntax, that it can be a little daunting at first, if clearly Davidson enjoying himself and sharing much of that joy. Basically, though, it's expert setting development and introduction of the first important characters, but the story is just starting to happen when the chapter ends. Set as it is in an alternate Mitteleuropa of the late 1800s, it has some of the feel of the (even better) Eszterhazy stories, which would begin appearing not much later.

Even better as well is the first of the too-short series of Arcana stories by Janet Fox, in the Fantastic issue, "A Witch in Time," where she demonstrates how much she's learned from the best of the sword and sorcery writers before her, and matches all but the very best of their work. Fox had published her first professionally-published fiction only a few years before, with the Magazine of Horror in 1970, and was already doing impressive work, even if her hand would grow a bit surer over the next several years. I can only wish she had published more. Meanwhile, one of her models, Fritz Leiber, reviews as his only book in this issue's column Henry Mazzeo's fine anthology of horror fiction Hauntings, illustrated by Edward Gorey, and notes something I'd failed to fully perceive over the years (probably in part because I first read the book when I was nine years old), that taken together, as they are presented on the dust jacket, the Gorey illustrations present their own narrative.

And Leiber is of course present in the Haunt of Horror issue as well, with the second half of his first novel, Conjure Wife, reprinted justly as a classic. I will have more to say about all three issues (as you might well guess, given the bare bones on display here) with more time to devote to the task, but I will note the most annoying ads in all three issues are the stiff cigaret center inserts in all three, put in these and not a few paperbacks of the era (Dell Books, particularly, stick in my memory thus) by their printer/binders in collaboration with the publishers, as tobacco companies began to cope with losing access to tv and radio advertising in the U.S. True brand in the F&SF, Kent in the other two...even more enervating than the $20 astrological chart ads in the Fantastic (particularly considering how far $2o went in 1973) or the "anti-gravity device" or the "ESP laboratory" offered among the less savory classified ads in the F&SF (the pitches in the Fantastic tended toward witchcraft and related Hidden Knowledge, usually less expensively).

That issue of F&SF is notable as well for having one of Sonya Dorman's Roxy Rimidon stories, which I really enjoyed, especially in the magazine versions. (They were slightly toned down, sexually, for the YA-aimed novel version, PLANET PATROL.)

Love the cover of that issue of FANTASTIC especially (a bit Marvel I guess?)

Todd, it's a long time since I read the Peregrine books, but I believe they were set considerably before the 1800's.

Now that you mention it, this story does have a certain late Medieval feel, without being too explicit...though clearly set in an already running down Holy Roman/Balkan Empire, and there is some suggestion of a plumbing and sewage monopoly on the top king's part...I haven't yet read the Peregrine stories aside from this one...

Meanwhile, thanks, Rich...I like Dorman, and haven't yet read any of that series, expurgated or otherwise (YA probably wouldn't even have been toned down too much if the book was published in the '80s or later...).

Sergio, indeed, Joe Staton doing his best Empowered Comix Babe...Ted White definitely tapped comics artists for his illustration team beyond those who were already amphibians in the comics and fiction magazine/book fields. Contrasts with Kelly Freas painting himself crossed with Frank Frazetta as the victimizer in the HAUNT cover...thank you.