A collection of historical fantasies that might just barely brush up against sf fleetingly... 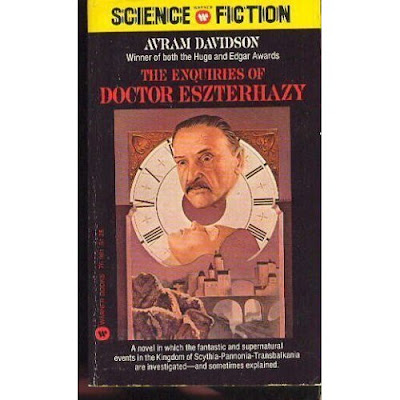 The Enquiries of Doctor Eszterhazy might just be the most brilliant book the most brilliant Avram Davidson saw published...and, of course, it was published as a paperback original (Warner Books, 1975) with little support and in a clumsy package, egregiously mislabeled "science fiction" (although as historical fantasies, the linked stories within touch on sf from time to time). Currently in print only in the expanded small press edition The Adventures of Doctor Eszterhazy, the earlier edition is in several ways preferable...most importantly because the later stories Davidson wrote involving the extremely learned Doctor were slighter and a bit less inventive on balance, still good but not as lapidary and achingly Right as the earlier set. Also, the typesetting leaves a bit to be desired in the newer book, which at least is a well-built hardcover. But to know Eszterhazy is to want to have all the stories, so one must eventually have the Adventures; it's simply a pity that circumstances so rarely rewarded Davidson well enough for him to consistently do the work of which he was capable.

Eszterhazy is a sort of Holmesian figure, only both more accomplished and yet also more believable; his efforts on behalf of the small Mitteleuropean nation in which he resides usually at very least brush him up against the supernatural. These stories, some of the best work ever published in those great fiction magazines Whispers, Fantastic and The Magazine of Fantasy and Science Fiction, display the ready wit, the easily-incorporated erudition, the passionate love of life and play, and the weary disappointment in the worst in humanity that Davidson's other best work displays, only rarely as concentratedly as in these accounted investigations. If you let them, these stories will educate you, amuse you, surprise you, break your heart occasionally, take your breath away at least as often.

I remember well sitting in the lobby of Discovery Bay, a condo tower in Waikiki, having both just moved in 1979 to Hawaii and discovered affordable back issues of Fantastic and others at a secondhand store called Froggies, reading "The Church of Saint Satan and Pandaemons," in an anniversary issue of Fantastic. The chair wasn't overwhelmingly comfortable, and I would jump a bit from time to time when someone would come in through the front door or knock to beg entrance past the expensive lock; I was down in the lobby to get some peace and quiet while my parents and brother watched television in the one-bedroom apartment we survived throughout that summer, with my then 7yo brother and I sharing the foldout couch bed in the living room. Didn't matter...the allusive, often hilarious, deeply strange narrative of Davidson's was easily the highlight of the issue. His non-Eszterhazy "Hark! Did I Hear the Squeal of an Angry Thoat?" in another, later Fantastic in my stash was nearly as good, even more improvisational and seemingly haphazard--the character of John Carter appears suddenly at the end, as one might guess from the Burroughsian title, but until that time it has been a nostalgic romp through mid-20th century New York City--but one feels the extra jolt with the Esterhazy stories of an author gently parodying as well as sympathetically representing himself with his protagonist.

They are necessary reading, and have only appeared in collected form in two rather obscure editions. 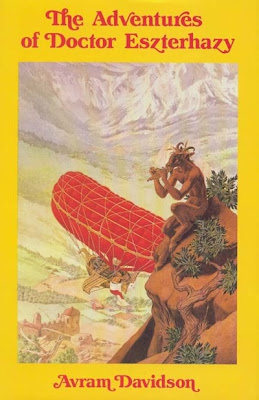 (This is another response to a Patti Abbott challenge, to cite a book in serious danger of being forgotten. See links to other answers to the call here, where Patti is also proudly hailing her daughter Megan Abbott's win of an Edgar Award for her novel Queenpin, and well she might!)

Avram Davidson was also an Edgar Award-winner, in fact the first person to have won both the Edgar and Hugo awards, and perhaps the first to have won both of those and the Howard (though his occasional collaborator Harlan Ellison might've beat him to that punch...I first became aware of Davidson through the Ellison in collaboration collection Partners in Wonder). Davidson's most fully-realized novel is also one with a modest publication history, Masters of the Maze; since his death, his ex-wife but lifelong friend and occasional collaborator Grania Davis, a talented writer in her own right, has made an effort to get nearly all of Davidson's work back into print, with impressive collections of his crime fiction and his tales of contemporary Jewish-American life as well as his fantasies, horrors and sf...most recently a collection of his similarly brilliant tales of an expatriate American finding odd things indeed in an alternate Guyana, Limekiller!.

And I've just discovered that the Eszterhazy story "The Odd Old Bird" was collected in neither book...now, I have yet another grail...

***and another Late Bulletin! Hot on the heels of Megan Abbott's 1 May win of the Best Paperback Original Novel Edgar Award from the Mystery Writers of America, Patti Abbott on 2 May herself picks up the vignette Derringer Award from the Short Mystery Fiction Society...it's a good week to be a writing Abbott, and, of course, since awards are only as good as the recipients they're given to, both awards have been elevated as well...here's the winning story, "My Hero."
Posted by Todd Mason at 5/02/2008 12:37:00 AM

Thanks, Todd. Relieved to get it up. I knew I could count on an interesting suggestion from you!